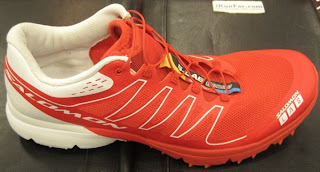 [We'll be carrying the Salomon Sense in the iRunFar Store beginning in June (a month after they're released). If you have a US address and would like to reserve a pair while supporting iRunFar(!), contact us and let us know what (US men's) size you'd like.]

One of the most anticipated trail running shoes of 2012 was born out of failure… at least relative failure. After his third place finish at the 2010 Western States 100 (See Unbreakable), Kilian Jornet wanted a pair of shoes ideally suited to his needs on that course. He needed a light shoe that drained well and provided traction from snow to desert. The Salomon S-Lab team went to work on a solution. When Kilian crossed the finish line at the Placer High track to win the 2011 Western States he was wearing their solution on his feet. In May 2012, we’ll all have the chance to wear these shoes in the form of the Salomon S-Lab Sense.

It’s hard to know where to start with a shoe like the Sense, so I’ll start somewhere simple – the weight. Conservatively, these shoes will weigh in at a svelte 6.5 ounces (185 grams) for a men’s US 9. Kilian’s size 7.5 is closer to 170 grams. Since it’s all the rage these days, you probably want to know how the Sense stacks up height wise. Well, it’s a low-to-the-ground 9 mm in the forefoot and 13 mm in the heel for a 4 mm heel-to-toe drop. Anyone who’s seen Kilian run knows that he’s a featherweight, efficient, forefoot runner so why isn’t this a zero-drop shoe you ask? Well, because it’s designed to race 100 miles or more and Kilian wanted a 4 mm drop for the kilometers after mile 80. There’s something to be said for a little extra protection, even on a non-technical course.

Speaking of protection, the Sense takes a different approach to it. Rather than put a rock plate between the outsole and midsole (lessens outsole deformation) or between the midsole and the foot (lessens proprioceptive feel), the Sense’s protective layer is sandwiched in the middle of the midsole. Specifically, a thin TPU film-on-mesh called Pro Feel Film is used to provide feel while providing push-through protection in the midfoot. That means while windows (for lack of a better term) in the forefoot seemingly display a carbon-fiber shank, the forefoot is quite flexible.

As the outsole is the densest piece of a running shoe, it’s key to minimize its use when making an extremely lightweight shoe. The Sense sticks to that principle with a minimally lugged outsole. However, a relatively soft outsole combined with the location and flexibility of the Pro Feel Film are keys to the shoe’s concept of “Dynamic Traction.” Basically, the outsole is able to deform, thus, providing more apparent lug height than a shoe with a less flexible outsole, whether due to the outsole’s inherent stiffness or the location of a stiff rock plate.

I can’t believe I’m so far into this preview and I haven’t mention what I feel to be the shoe’s strongest point, it’s fit. You see, Kilian really wanted a shoe that he could wear sockless, particularly for UTMB. The result is quite simply the most comfortable running shoe upper I’ve ever had on my feet. It hugs (dare I say makes out with) the foot. Admittedly, my runs in the shoe have been limited to a few dozen yards on carpet, but having slipped more than my fair share of shoes on my feet I’m confident that these will be a joy to run in come next May when they’re released. What’s more, I watched as others (mostly top ultrarunners sponsored by other companies) tried on the shoe and all seemed equally amazed at the upper. The Sense’s Endofit (as Salomon calls it) sock-like feel is the real deal.

I also can’t directly speak to the drainage capabilities of the shoe, but the fine open mesh of which most of the upper is made should both breathe and drain excellently.One small change that folks familiar with Salomon’s shoes will notice the first time they lace up the Sense is that the “lace garage” for the Quicklace dongle is top-loading rather than the standard setup where the dongle is tucked upwards into a higher lace garage. The Quicklace itself was also modified to make it lighter.

One difference between Kilian’s personal version and the production version of the Sense is that the midsole EVA is exposed in the midfoot of Kilian’s shoe whereas it will be covered with outsole in the production version. This will provide a bit more durability for those of us who aren’t quite as gazelle-like as Kilian. I jokingly suggested that Salomon provide a pair of dotted lined labeled “cut here” on the outsole, but even without that I’m sure a few intrepid souls will take a knife to their Sense’s soles. (Perhaps, I can make pattern!)

HOWEVER, (and this is a really big however) one lucky iRunFar reader will get his or her very own pair of limited-edition Kilian Jornet S-Lab Sense months before the rest of us. Keep reading iRunFar for your chance to win a pair of Kilian’s shoes for yourself!