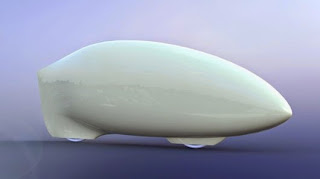 Following its Sikorsky Prize-winning Atlas helicopter, Canada's AeroVelo now aims to set a new human-powered speed record during September's World Human-Powered Speed Challenge in Battle Mountain, Nevada, with a high speed bicycle named Eta. The current record stands at 83.1 mph (133.8 km/h), and was set at the event last year by a Dutch team of students with the VeloX3 bike.

Details on the new bike are still thin on the ground at this stage, and we can expect more solid information to filter out over the coming weeks, but we do know the basics. Like Bluenose, Eta's pilot will sit in a recumbent position and have no windscreen, but will instead rely on a small video camera atop the bike to offer views of the outside.

Future plans for the interior on-screen display include pilot power, a comparison between target speed and actual speed, the distance traveled, and rpm.

Render showing Eta's general layout (Image: AeroVelo)
Eta sports handmade tires measuring approximately 66 cm (26 in) in diameter, which is a step-up from Bluenose's small 406 (about 50 cm/20 in) tires. It will also feature a very aerodynamic design, in order to make the most of the mere 1 hp that's estimated will be the maximum power output from the bike's pilot.

According to AeroVelo's preliminary calculations, which are based on computer simulations of a speed run at Battle Mountain, Eta should offer around 1 percent improved performance in drive chain, aerodynamic drag, rolling resistance, and bike mass, when compared with its predecessor.

In order to help raise funds, AeroVelo has launched a Kickstarter campaign. Backers can pledge between CAD 5 to CAD 1,000, with rewards such as T-Shirts, scale models, and an hour long phone call with the team leaders offered. The campaign ends on July 9. 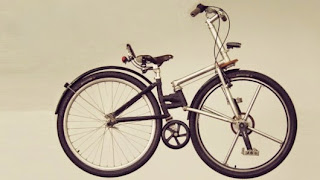 IzzyBike lacks a chain, but has optional 2-wheel-drive

The IzzyBike definitely has a look of its own

Bike chains can be dirty and noisy, so an increasing number of manufacturers are choosing to replace them with belt drives. Polish inventor Marek Jurek, however, has gone a step further with his IzzyBike prototype. Its drivetrain is built right into the front wheel hub, which gives it some claimed advantages over other bikes – besides there being less mess.

The current aluminum-framed prototype weighs about 11.5 kg (25 lb) The bike folds in half in less than a second It can reportedly be easily stowed in the back of a car when folded Inventor Marek Jurek with the IzzyBike View all
First off, the IzzyBike isn't like a child's tricycle, in which the cranks are simply fixed to the wheel.

Riders can stop pedaling and allow it to freewheel, plus the patented system incorporates three gears. According to the IzzyBike website, this setup allows the rider's pedaling power to be more effectively delivered to the wheel than if it first had to be transmitted through a chain or belt.

The IzzyBike folds without the need for extra hinges built into its frame
The lack of a chain also makes it possible to fold the bike in half in less than a second, without any extra hinges needing to be built into the frame. It additionally results in a very short wheelbase (0.9 m/3 ft), making the bike quite maneuverable. The use of 29-inch wheels, however, still gives it some speed. It's even possible to add a jockey wheel that links the front and back wheels, giving the bike 2-wheel-drive for increased traction.

Its unique configuration is additionally said to allow for a more comfortable ride, increased stability, and better visibility ... plus it'll definitely get you noticed, if you consider that to be a good thing.

Jurek is currently trying to drum up interest in the concept, both in terms of industrial partners and potential customers. He tells us that he's aiming for a retail price somewhere in the region of US$900 to $2,000, depending on materials and accessories. You can contact him for updates via the first link below.

The IzzyBike can be seen in action in the following video. 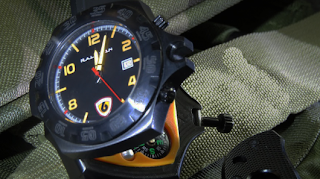 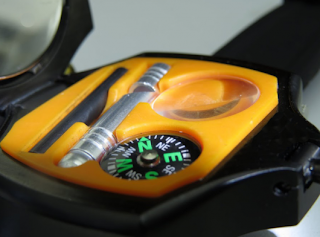 OUTDOORS
Recon 6 watch straps a survival kit to your wrist

The Recon 6 has a hidden secret

From the makers of the Crovel survival shovel comes a new multifunctional survival tool. "A cross between the Swiss Army Knife and MacGyver," the Recon 6 wristwatch is more than meets the eye thanks to the small survival kit that's integrated into its body and strap.

The watch has a blade tool on its bandThe Recon 6 is the latest product from Gear Up Center Pop the watch out of the way and access several key survival tools
We've seen a few woven bracelets with integrated survival kits, including the Kodiak. We've also seen an emergency communicator survival watch in the form of the Breitling Emergency II. The Recon 6 offers a different survival feature set to slap on your wrist.

"The watch is designed, really, after my needs of wanting to go out into the wilderness," Recon 6 designer and survival expert Tim Ralston explains in a video. "Being an adventure guy myself, the last thing I wanted to do was try to find that survival package, always have it with you – that's not always easy to do. But with this watch, it's tied to your wrist."

On its face, the Recon 6 is a basic watch. It includes a simple number/notch design and phosphorescent hands below a scratch-resistant, anti-reflective mineral glass face. It also has a rotating bezel and a date window. It's not the fanciest timepiece out there, but it's a function-forward design that can work for casual and recreational wear.

Pop the watch out of the way and access several key survival tools
It's underneath the watch face where the Recon takes a step up from the average outdoor watch. The timepiece chassis swings out of the way to reveal a small survival kit with a series of tools. On the top tray, there's a small liquid compass, a ferro fire rod, an emergency whistle and a small magnifying glass. The underside of the hinged watch chassis has a signaling mirror, plus 25 feet (7.6 m) of fishing line and hooks are tucked below the orange tray. The watch also has an LED flashlight on its body, a bottle opener on the strap buckle, and a blade/can opener concealed in a sheath on the strap next to the buckle. When all is said and done, the Recon has 14 different functions.

We're suckers for interesting survival gear and we love the idea of a survival watch, but we feel like the execution is clunky. They've given the watch a bulky, double-sized body to conceal a survival kit filled with downsized, inferior gear.

They could cut out the entire lower compartment and its tiny toolset and have a normal-sized watch equipped with the tools that are likely to see the most use – the built-in blade, can opener, bottle opener and flashlight. The compass could be integrated into the watch itself or onto the strap and the signal mirror on the underside of the watch body. They could probably figure out a way to get the fire rod and/or whistle in there, too.

Relying on the Recon 6's kit as one's entire survival kit is unwise for any situation where there's even a small likelihood of getting into serious, self-reliant trouble, so we'd much rather wear a 7- or 8-in-1 multitool that's the size of a regular watch. Wearers could then supplement it with other survival gear.

It's a little surprising that Ralston describes the Recon 6 as a replacement for a larger survival pack because he's the type of survival and preparedness guy that you'd expect to tell you not to rely on cheap, over-the-counter survival kits for wilderness use. He has a point that the Recon 6 is easier to find and carry, but it's built like a secondary, on-person survival kit, not a replacement for a larger, more complete kit. In fact, it's missing some basic "10 essentials" such as first aid, so you'll have to pack other survival provisions to carry a complete kit.

Ralston and his team are trying to meet a minimum order to begin manufacturing. They've put the Recon 6 on Kickstarter, offering it for early bird pledge pricing as low as US$275. The anticipated retail price is listed at $495. We'll stick to pocketing a $15 mint tin survival kit and spending the leftover $480 on a more function-packed outdoor watch like the Garmin Fenix 2 for now, but hopefully the design evolves over time. It's an interesting start.