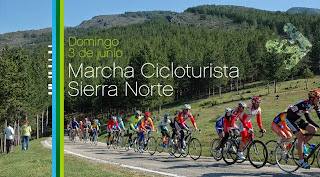 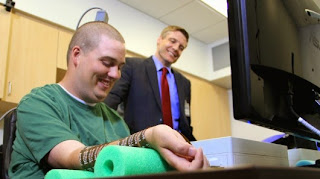 In what is being touted as a world first, a quadriplegic man has been given the ability to move his fingers and hand with his own thoughts thanks to the implantation of an electronic device in his brain and muscle stimulation sleeve. Part of a neurostimulation system dubbed "Neurobridge," the technology essentially bypasses the damaged spinal cord and reconnects the brain directly to the muscles.

Wexner Medical Center and Batelle have worked together to develop Neurobridge technologyWexner Medical Center and Batelle have worked together to develop Neurobridge technologyThe Neurobridge technology relies on a chip implanted in the paralyzed person's brain Ian Burkhart using his paralyzed hand and fingers thanks to Neurobridge technologyView all
The Neurobridge system, which was developed by nonprofit R&D organization Battelle through work that began a decade ago, uses algorithms to effectively "learn" the user’s brain activity. The system decodes neural impulses from the brain and converts them into signals that are then transmitted to a specially-developed, high-definition electrode stimulation sleeve attached to the paralyzed limb. The sleeve then stimulates the correct muscles to perform the desired movements, with everything from thought to activity taking place within a tenth of a second.

"It's much like a heart bypass, but instead of bypassing blood, we're actually bypassing electrical signals," said Chad Bouton, research leader at Battelle. "We’re taking those signals from the brain, going around the injury, and actually going directly to the muscles."

Neurobridge is by no means the first system to implant electrodes in the body and bring hope to people suffering paralysis. In 2011, a man paralyzed from the chest down took his first tentative steps after a stimulating electrode array was implanted into his body. Instead of bypassing the nervous system, the implant provided continual direct electrical stimulation to the lower part of the spinal cord that controls movement of the hips, knees, ankles and toes, to mimic the signals the brain usually sends to initiate movement.

The following year in 2012, the experimental Braingate neural interface system enabled a paralyzed woman to drink a cup of coffee using a robotic arm. Also in 2012, researchers at Northwestern University developed a neuroprosthesis that restored complex movement in the paralyzed hands of monkeys. This involved implanting a multi-electrode array directly into the monkeys' brains that decoded signals and relayed them to a functional electrical stimulation (FES) device that delivered an electrical current to the paralyzed muscles.

But Neurobridge is the only system claimed so far to bypass the spinal cord and provide direct stimulation of a human patient's muscles using their own thoughts. The first patient to use the Neurobridge neural bypass device is Ian Burkhart, a 23-year-old from Dublin, Ohio, who was paralyzed four years ago in a diving accident. Burkhart saw the chance to participate in the FDA-approved clinical trial at Ohio State's Wexner Medical Center as a possible way to help other people suffering spinal cord injuries.

"Initially, it piqued my interested because I like science, and it’s pretty interesting," Burkhart said. "I’ve realized, 'You know what? This is the way it is. You’re going to have to make the best out of it.' You can sit and complain about it, but that’s not going to help you at all. So, you might as well work hard, do what you can and keep going on with life."

Burkhart had the Neurobridge device – a micro-chip sensor smaller than a pea – implanted onto the motor cortex area of his brain in a three-hour operation earlier this year. "The surgery required the precise implantation of the micro-chip sensor in the area of Ian’s brain that controls his arm and hand movements," Wexner Center clinician Dr. Ali Rezai said.

Following the operation, the researchers worked on a way to arrange the correct sequence of electrodes to stimulate to permit Burkhart to move his fingers and hand in a functional manner. Unlike other devices that merely stimulate gross-motor areas to provide muscle tension, the Neurobridge device specifically targets individual muscles matched to individual neural impulses.

Ian Burkhart using his paralyzed hand and fingers thanks to Neurobridge technology
As such, the researchers had to differentiate between neural signals that operated such things as the muscles rotating his hand, those employed to make a fist, or the ones that made him pinch his fingers together. Then, once the signals had been sorted, each signal was connected to its appropriate place on the stimulation sleeve to drive the correct set of muscles. Once these finer points were configured, Ian was finally able to move his hand and use his fingers under his own thought control.

"It’s definitely great for me to be as young as I am when I was injured because the advancements in science and technology are growing rapidly and they’re only going to continue to increase," Burkhart said.

It has taken the researchers ten years to develop Neurobridge to this point from the initial detection of thought impulses via an electrode array implanted in a paralyzed person’s brain, with the team planning to continue to further define and enhance the technology. The on-going program at the Wexner Medical Center includes four other potential patients who have volunteered to participate and they, too, should hopefully see further benefits from this breakthrough in thought-controlled electrical muscle stimulation.

ReWalk exoskeleton gets FDA approval for home use 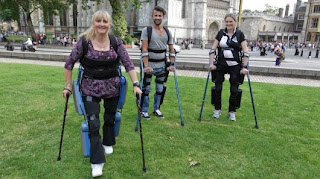 ReWalk consists of a wearable brace support worn outside clothing, a computer-based control system and motion sensors to enable paraplegics to sit, stand, walk and even climb stairs with a little motorized help. Until now, the ReWalk technology has only been available in the US at rehabilitation clinics in the form of the ReWalk Rehabilitation system. This version is designed specifically for use in a clinical rehabilitation environment and as such can be adapted to fit users of different sizes and weights.

The ReWalk Personal System, on the other hand, is customized to suit a specific user and is designed for daily use in a range of environments, including outdoors and on a variety of surfaces and terrains. It was first cleared for personal use in the UK in 2012 and has been available there and throughout Europe since that time. Now those in the US have the chance to take home their own ReWalk with the FDA issuing a marketing clearance for the device.

"This revolutionary product will have an immediate, life-changing impact on individuals with spinal cord injuries," said Larry Jasinski, CEO of ReWalk Robotics. "For the first time individuals with paraplegia will be able to take home this exoskeleton technology, use it every day and maximize on the physiological and psychological benefits we have observed in clinical trials."

Potential customers will need to become certified in using the ReWalk system by completing a training program and undergoing a medical examination.
http://rewalk.com/news/press-release/rewalk-personal-exoskeleton-system-cleared-by-fda-for-home-use/