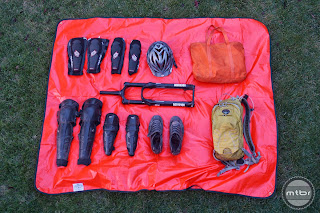 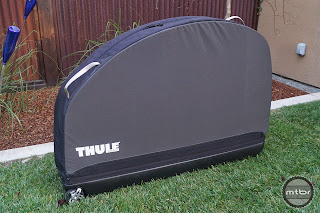 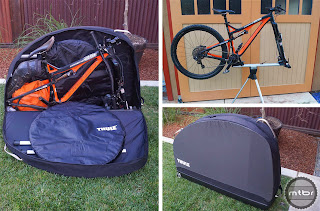 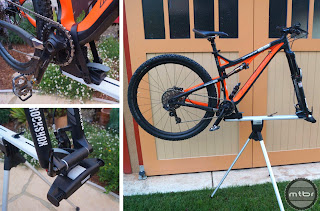 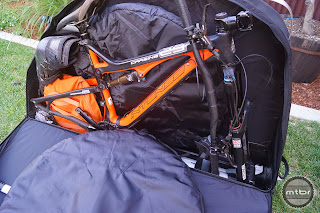 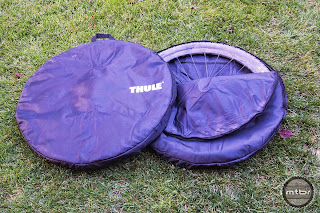 With an integrated workstand and a foldable architecture that allows it to pack down for storage, Thule’s new RoundTrip Pro may be the most convenient travel bike bag on the market. The $600 carrier is big enough for a downhill bike with riding gear—helmet, shoes, hydration pack tools and pads—yet folds down small enough to be transported in, say, a rental car, or stored at home without taking up much room.

Transformer: More than meets the eye

The RoundTrip Pro gets its assembled structure by utilizing a pair of plastic corrugated panels that accordion and zip into thin sleeves on each of the case’s sides. The fit is extremely tight and requires a little wrestling, but provides rigidity to the case.

Inside the bag, a lengthwise aluminum beam clips into the case’s molded plastic bottom. During transport it holds and stabilizes the bike within the case. Outside the bag, the beam attaches to a tripod knuckle assembly and three aluminum legs to create the workstand.

The workstand’s main beam provides the attachment point for the bike during transport, while it’s legs slide into elastic loops to provide protection.

The bike attaches to the beam using an adjustable fork mount that accommodates either a 9mm quick release, or a 15mm or 20mm thru-axle. A pair of interlocking closed-cell foam blocks cushion the bottom bracket from the beam and provides tension against the ratcheting strap that cinches down the rear of the frame.

For the recent launch of their new 36 fork FOX asked us to fly with our personal bikes to Moab, so we could get a feel for the new suspension on a familiar ride. We took our Intense Carbine 29 in part because we wanted to see how the RoundTrip Pro would accommodate a bike with a fairly long wheelbase.

We brought two sets of pads—soft and hard—a helmet, hydration pack, shoes and a large tool bag to Moab in the Thule RoundTrip Pro. On the way home we were able to fit an extra fork and still had some storage room left over.

After removing the front wheel, we assembled the workstand and mounted the bike. Next we removed the rear wheel, pedals, handlebar from the bike. We then lowered and rotated the saddle before unclipping the beam from the tripod and snapping it into the base of the case. Though we still had a couple inches of clearance on each end, we unbolted the rear derailleur, wrapped it in a rag and zip tied it to the inside of the chainstays to keep it out of harm’s way.

Thule’s well-padded wheel bags help protect the bike inside the case, and can be used on their own without the case. The bags have a zipper pouch for axles and quick releases, but we failed to notice them until we got home.

After padding the handlebar with a few more rags we put the wheels into the well-padded wheels bags included with the case. Thule actually recommends bubble wrapping the frame, but we used more rags and our other gear—hydration pack, helmet, and pads to add protection and prevent disassembled parts from rubbing. Finally, we stored our rear thru-axle, pedals and tools in our shoes, using a pair of socks to clog them inside.

The workstand’s tripod knuckle cleverly clips to the beam for transport and storage.

The last step before zipping the bag shut is packing the workstand’s tripod—you simply remove the legs and slide them into elastic straps on the inside of the case’s sides, then clip the tripod knuckle assembly to the beam anywhere under the bike’s downtube.

Workmanship on the RoundTrip Pro appears excellent, and Thule paid special attention to small details like quality wheels and handle placement so the case is well balanced for rolling.

A large pair of quality wheels and a well-placed grab handle make piloting the RoundTrip Pro a breeze. The case also includes a business card window.

At 22-pounds the RoundTrip Pro is quite a bit lighter than hard case alternatives, which makes it both manageable and unlikely to incur overweight baggage charges, though with most airlines, you’ll be paying a steep premium for the privilege of flying with your bike.

The Thule RoundTrip Pro is an excellent, versatile and lightweight bike travel case that features ample room for both bike and gear, as well as unparalleled compactness when not in use. The case encourages well-organized packing with its premium workstand and purposeful storage areas and pockets.

With the stand legs and padded wheel bags acting as reinforcement, we think the RoundTrip Pro provides bike protection that’s well above average for a soft sided case. If you feel your bike needs more armoring, Thule actually sells a hard-sided version called the RoundTrip Transition with the same integrated stand for the same price.

The Thule RoundTrip Pro is more expensive than the two bags we see most often in our travels—the $475 Evoc Bike Travel Bag and the $375 Dakine bike bag. Thule sells another legit case in that price range as well with the $375 RoundTrip Sport, but we thing the RoundTrip Pro’s advanced feature set trumps all of them. In fact, the workstand and the wheel bag are so good, we think Thule should sell them separately for people who don’t need a bike case.

Corrugated pieces a little hard to assemble
Not recommended for shipping via UPS, FedEx, etc.
MSRP: $599.99 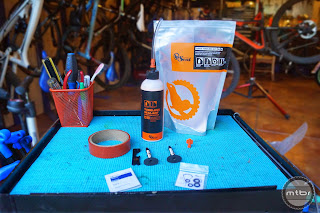 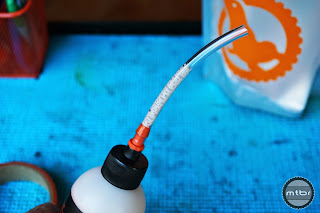 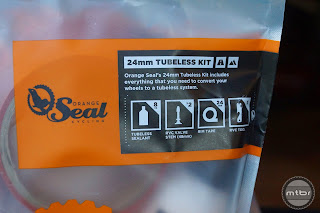 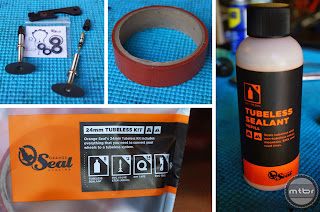 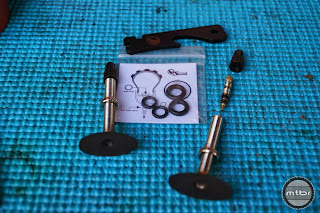 Boasting the ability to seal tire cuts as large as three-quarters of an inch, Texas-based Orange Seal has set their sights high not only in terms of product performance, but in challenging the established leader in the category. And while it seems like a tall order, those prospects don’t appear to frighten company founder John Vargus who thinks his company has built a better mousetrap…err airtrap.

With full tubeless kits for everything from skinny road wheels on up to ginormous fatbike tires, Vargus says Orange Seal is designed to be both higher-performing and more versatile than prior such offerings on the market. They even offer their special Subzero Sealant for cold weather riding.

In addition to fixing larger cuts, Orange Seal promises better coating and adhesion to seal sidewall slices as well as the porosity of the tire. They also claim the ability to seal imperfections between the tire and wheel bead, and say their seals will last as a permanent fix for the life of the tire. The sealant was also designed to work at pressures as high as 120 psi for road applications, and was formulated to be both eco-friendly and anti-corrosive to aluminum, which is an issue with certain rim/sealant combinations.

One persistent complaint about using sealant is complicated and messy set-up routines that require measuring cups or special injectors. Any way you slice it, initial set-up has some complexity, but Orange Seal attempts to remove some of the anguish by including all the necessary components in its easy-to-use kits.

The Orange Seal bottle includes a tube for injecting sealant directly into the valve or tire. The system is simple to use and less likely to create a mess than other systems.

By making the product bottle double as a sealant injector, the likelihood of spills because of pouring and measuring is greatly reduced. When used in conjunction with removable-core valve stems, both the initial fill and subsequent sealant top-offs are a snap.

The Orange Seal bottle includes a Twist-Lock Injector—a mess-free of getting sealant directly into the tire.

Getting tubeless tires to seat for the first time can be an exercise in frustration. Even with the use of a compressor it can be difficult to get tire beads properly snapped into the hook. On the first wheels we set up—a pair of Easton Haven Carbons with new Specialized Ground Control Grid 2Bless-ready tires—we were able to air-up using only a floor pump. To do so, we removed the valve cores to allow maximum airflow, then pumped until beads snapped into the hook.

With the valve cores removed, air can flow into the tire faster making seating easier.

Our mounting ease was likely more a matter of the specific tire and rim combination than the sealant—the Haven’s are natively tubeless without even a rim strip, and the Grid-version Specialized tires are thick and supple—but we’ll be trying a number of combinations in future set-ups.

In the world of tubeless sealant, no news is good news, which is to say we haven’t had any failures in the month we’ve been riding our Orange Sealed wheels. During that time, we’ve racked-up a fair amount of ride time including two trips to Moab, Utah—a place not known for its kindness to tires and wheels.

Last week we unmounted our tires to check the sealant condition and found a nice, wet coating of Orange Seal on the inside of the casing along with a small pool of the stuff at tire’s lowest point. When we unseated the tire, we pulled off a couple stringy strands of dried sealant along the bead hook.

The particulate matter that serves as a clotting agent is less obvious than that used in Stan’s NoTubes, but we presume it to be still suspended within the liquid. No crusty accumulations or “Stanimals” were present in either tire.

It was hard to tell if the sealant had actually plugged any leaks, or whether we’d just been lucky enough not to have any punctures, but we’ve been flat-free for the duration. Truth-to-tell, flats are a relative rarity when running tubeless on our home trails, but we more-or-less expect some in Moab.

In any case, we remounted the tires and added another ounce of sealant per Orange Seal’s recommendation and re-aired the tires without a hitch.

Torture testing and company Q & A

While we will continue to monitor and report on our Orange Seal-equipped wheels’ performance in the real world, we’re also going to conduct some staged torture testing over the few weeks that we’ll video record and present here. We’ll also perform the same tests with the Kleenex of tire sealants—Stan’s—to see if we can find any differences in performance.

The company’s founders will also entertain a question-and-answer session on all things tubeless, so if you’ve got any burning questions about Orange Seal or tubeless in general, comment below and we’ll run it by them.