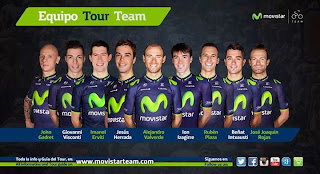 Searching for Tour de France podium
June 30, 2014 | Madrid
After dominating their home Nationals, Movistar Team brings strong block into Grande Boucle's 2014 edition with goal of taking Alejandro Valverde to overall top-3 in Paris
PRESS CONTENT | Download Movistar Team's 2014 Tour de France Pressbook (PDF)
PREVIEW | Tour Guide (race description, stage profiles, TV listings, useful data)
With 22 victories on their season tally and three national titles -Valverde and Malori were crowned ITT champions in Spain and Italy, while Ion Izagirre got the 'rojigualda' jersey in Ponferrada- as a final moral boost, the Movistar Team will head into the 101st edition of the Tour de France. The Grande Boucle, which will start in Leeds on Saturday, will see Eusebio Unzué's squad bringing a strong nine-man block aiming to repeat last year's podium finish claimed by Nairo Quintana.
With Alejandro Valverde as designated leader for the overall classification, the Blue roster for the French stagerace will be completed by Imanol Erviti, John Gadret (FRA), Jesús Herrada, Beñat Intxausti, Ion Izagirre, Rubén Plaza, José Joaquín Rojas and Giovanni Visconti (ITA). Unzué's structure will take part in the Tour for a 32nd consecutive time, having snatched 7 overall victories (five from Miguel Indurain, one each by Pedro Delgado and Óscar Pereiro), 31 stage wins and spent 80 days in the yellow leader's jersey.
Eusebio Unzué: "The goal is fighting for a podium place in Paris with Alejandro, that's clear. He's coming into the race really strong, confident about his chances of achieving that objective, in a route I think suits him pretty well. We know there will be lots of traps he'll have to get over - the stress in this race makes all risks to increase. Still, we hope to get through the first week in good shape and start with the first weekend of mountains in the best possible condition. He will have a balanced team by his side, with riders suited for all terrains and in perfect form. Intxausti and Plaza had gone through some problems in the last few weeks, but looked totally recovered in the National Champs. Izagirre has already shown his condition; Erviti and Rojas are a guarantee, as well as Gadret, who will be important in the mountains. Jesús Herrada will make his debut because we think he's prepared to debut in a Grand Tour, and by his characteristics, I think this is the one that can be most adequate to him. He took a huge leap forward this year and he deserved it. It's so sad for us to leave Dowsett out of the team - despite his efforts, he couldn't get to his best form due to breathing problems resulting from an infection he suffered; on the other hand, Visconti contested the win until the very in the Italian championships on Saturday, which indicates he's into good condition." 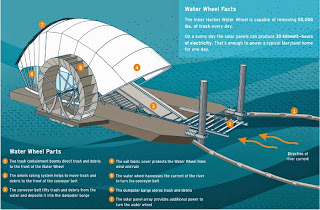 WATER
How a Solar-Powered Water Wheel Can Clean 50,000 Pounds of Trash Per Day From Baltimore’s Inner Harbor

Brandon Baker | June 25, 2014 3:11 pm |
A large wheel has been strolling the Baltimore Inner Harbor the past month, doing its best to clean the trash that has littered a city landmark and tourist attraction.

It’s called the Inner Harbor Water Wheel, and though it moves slow, it has the capability to collect 50,000 pounds of trash. The timing for John Kellett’s solar-powered creation is crucial—hands and crab nets simply can’t keep up with the growing amount of wrappers, cigarette butts, bottles and other debris carried from storm drains into the harbor.

“It looks sort of like a cross between a spaceship and a covered wagon and an old mill,” says Kellett told NPR. “It’s pretty unique in its look, but it’s also doing a really good job getting this trash out of the water.”

The wheel has become an integral part of the Healthy Harbor Waterfront Partnership Initiative. It receives power from the Jones Falls river’s current near the harbor, which turns the wheel and lifts trash from the water into a dumpster barge. A solar panel array keeps it running when there water current isn’t enough.

Graphic credit: Healthy Harbor
The wheel is now docked to the harbor. Each it runs, it removes an impressive amount of debris. So far, it has never collected less than eight cubic yards of trash.

Healthy Harbor hopes to make the body of water swimmable in less than six years, and the Water Wheel could be a big part of that.

“The water wheel has been a time-saver for us,” said Bill Flohr, who runs Baltimore Harbor’s East Marina. “It seems to be collecting probably 95 percent of what we normally had to pick up by hand.”