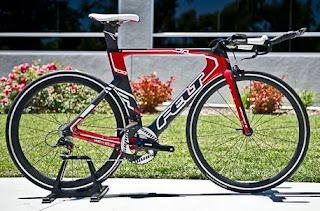 2012 Felt DA: Sublime Performance With An Attainable Fit And Price

The Felt DA debuted this year and we were blown away by its ride quality and performance, but it’s currently only available as a frameset for $4,999 or a complete bike for $12,499. Not exactly an affordable price. For 2012, Felt is making the DA available to many more riders in two ways: By increasing the range of fit adjustability and offering a complete line of more affordable bikes, stretching as low as $3,999. Although that price is still a big number, the DA brings ultra-high performance and ride quality to a near-mid price point that is dramatically lower than the cheapest model of the integrated front-end, pro-level tri frames from other brands.

The current version of the DA, debuted last year with the 3rd version of their integrated aerobar attachment system called Bayonet III. This system uses a rotatable stem that bolts onto a piece that extends out and up from the upper headset bearing. This arrangement provides a wide range of positioning options for riders needing a long stem. The rotating pieces sweep across many different fit position and allows for very fine adjustment. Its only shortcoming was the inability to prop the bars high above the frame without extending the bars far in front of the frame. Felt has abolished that problem by creating new stem pieces and aerobar risers and the 2012 DA has the ability to fit an incredible range of riders.

To bring the DA to more riders, Felt is introducing a range of six stem pieces and aerobar pad risers. These pieces in addition to the original rotating stem pieces that have been available in the past allow the DA to fit an incredible range of positions and riding styles.
1423 300x199 2012 Felt DA: Sublime Performance With An Attainable Fit And Price

The seatpost camp allows the saddle angle to be fine-tuned. Photo: Aaron Hersh

The rotating stem option creates a wide fit adjustment range equal to a stem 86mm long stems with between 1 degree and 38 degrees of rise and extending out to version roughly equal to 95mm, 110mm, 125mm and 140mm without any headset spacer. This system creates a massive range of adjustability for medium to long-reach aerobar positions. They cannot accommodate positions with very short reach values or positions with short reach and tall stack dimensions. Felt’s new fit pieces completely remove this limitation entirely.

The one-piece stems come in familiar dimensions (such as 10cm with 30 degrees of rise) but this one-of-a-kind system creates a unique set of fit characteristics. In addition to mounting the aerobar, these stem pieces also replace the dust cap used to press against the upper headset bearing used on traditional stem and steerer tube systems and eliminate the option to use steerer tube spacers. We pulled out the trigonometric calculator and ran the numbers to equate Felt’s stems to fit dimensions of more typical stem and steerer tube front ends.

Calculation conditions: Standard stem with a 4cm tall steerer tube clamp. Stem mounted on a 5mm headset dust cap without any other spacers, the lowest possible configuration. Head tube angle of 73 degrees. The Reach fit difference and Stack fit difference columns refer to the difference between the DA fixed position stem and the closest standard stem.
chart1 2012 Felt DA: Sublime Performance With An Attainable Fit And PriceThese pieces allow the DA to fit positions with a shorter reach value than the DA was previously able to attain. In addition to the stem options, Felt has created vertical risers compatible with the Devox and Bayonet aerobars that come spec’d as standard bars on the DA line. These risers allow the elbow pads and extensions to be propped above the base bar and complete the fit picture for the DA by enabling riders to select an aerobar position with a short horizontal reach dimension and a tall vertical stack dimension to the elbow pads.

With the addition of these stem pieces and aerobar pad risers, the DA is able to match an incredibly broad spectrum of fits without compromising the stiffness of the bike’s front end. This combination of fit flexibility and stiffness allows the DA to perform at its incredibly high level for many riders that would struggle to fit most other tri bikes with integrated front ends. It represents a leap in performance not just for the athlete capable of riding a demanding position, but for riders needing a more conservative position as well.

The DA frame will be constructed with two different carbon layups—type of carbon used and the fiber orientation, which affects stiffness, strength and vibration transfer—in the identical shape.
2010 300x262 2012 Felt DA: Sublime Performance With An Attainable Fit And Price

The higher-level frame is built with Felt’s premier layup, which they call UHC + Nano MMC InsideOut Carbon, and will be sold as a complete bike called the DA1 or as a frameset. We conducted an extended road test on the 2011 DA built with this same layup, and it quickly became one of our favorite bikes for its incredible stiffness and handling precision. The DA1 ($12,999) is built with serious hardware. It comes with Shimano’s transcendent Dura-Ace Di2 electronic drivetrain and Zipp 808 Tubular Firecrest race wheels, arguably the best components and wheels available. Felt even includes Enduro ceramic BB bearings. Felt specs their Devox Carbon aerobar, but don’t write this bar off as a house-brand component included to cut costs. Not only is it light (595g), but it creates comfortable brake and aerobar grip positions, offers a wide range of extension length adjustment and 1.5cm of elbow pad stack adjustment in a sleek and lean package that uses minimal hardware. The bar can be flipped upside down to lift the brake lever grip position by 2cm for a more relaxed position out of the aerobars without altering the aero position.

The DA2 ($8,999) uses the exact same frame shape as the DA1 but Felt’s 2nd-tier carbon layup. We haven’t had the chance to ride this model to see if it matches up to the DA1’s incredible ride experience, but its component kit is incredibly high-level. It uses Dura-Ace Di2 shifters and derailleurs along with a Vision TriMax carbon TT BB30 crank with standard 53/39 chainrings. The Zipp wheels are swapped from Reynolds / Felt TTR1 AWS carbon clincher race wheels. The set has a 66mm-deep rear wheel and a 46mm-deep front and is wrapped with brand new TTR1 tires designed by Felt to optimize the aerodynamic performance of their line of aero wheels.

The DA3 ($4,999) is equipped with Zipp VukaShift R2C shifters, SRAM Red derailleurs and aero chainrings. The drivetrain is completed with a SRAM S300 crank and SRAM cassette and chain. It rolls on Felt TTR2 wheels with carbon deep-section rims and an aluminum brake track strapped with Felt’s TTR1 aerodynamic tires.

Although the pro-level bikes get most of the attention, the DA4 ($3,999) and DA4W ($3,999) are arguably the big story of the 2012 Felt tri bike lineup. They are built with the same frame as the DA2 and DA3, the same Bayonet III integrated aerobar attachment system as well as a mixed Shimano Dura-Ace component kit, but the DA4 bikes are starting to sniff the designation of “mid-priced” despite their bevy of decidedly high-end features.
1720 300x199 2012 Felt DA: Sublime Performance With An Attainable Fit And Price

The DA4W, the women’s specific model, has the same frame geometry as the gender-neutral DA4, but it comes with the Fizik Vitesse Miss Tri saddle and compact chainrings (50/34) to create an easy climbing gear. Its distinctive blue, pink and purple paint accents and blue and pink anodized water bottle bolts give the 4W a wild aesthetic that will never blend into the transition area.

Other than those details, the DA4 and DA4W are nearly identical. They are both built with Felt’s Bayonet aerobar, use a Vision TriMax Pro crank with compact bolt circle and an FSA chain. They have Vision Metron Shifters instead of the standard rotating Shimano Dura-Ace levers that use a totally unique shifter motion and allow the rider to execute both up-and downshifts without adjusting hand position.

The components compare favorably with many bikes priced at the $3k level, but the DA4 and DA4W add the aerodynamic performance and outstanding ride experience that comes from the DA frame and Bayonet III system. Most other brands with bikes featuring an integrated front end don’t offer a model under $6,000, much less $4,000.

We had the opportunity to conduct an extended ride test on the 2011 Felt DA and we were blown away with the ride experience it offers. Its bottom bracket is stiff when sprinting, but many tri bikes have that attribute. What separates the DA from most tri bikes is the rigidity of its front end.
1228 300x199 2012 Felt DA: Sublime Performance With An Attainable Fit And Price

The Bayonet III system stiffens the front end in three ways. It buttresses the headtube with the extended segment in front of the head tube, replaces the steerer tube with a robust attachment piece and prevents the rider from propping their bars so high above the frame that the stack becomes flexible. The result: incredible cornering stability and predictability and a confidence-inspiring ride. The DA has agile handling characteristics, but the bike is unfailingly steady even when cornering aggressively.

The only catch: Only the DA frameset and DA1 are built with the same frame as the 2011 DA we tested. The DA2, DA3, DA4 and DA4W are built with a slightly lower-lever carbon layup and we haven’t yet tested that frame. All those bikes do, however, have the same Bayonet III aerobar attachment system to bolster the front end. 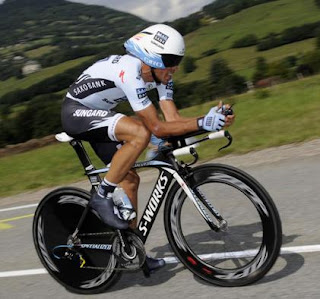