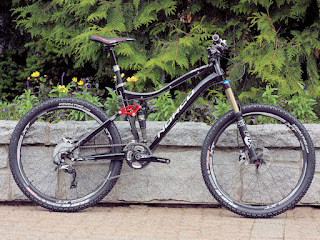 New for 2012, the Norco Sight is a versatile 140mm travel bike for a rider who likes to do a little bit of everything, whether it’s ripping through classic marathon-length events like The Test of Metal in Squamish, British Columbia, grinding through backcountry epics, or simply riding from your door onto your favorite local trails. The Sight is light and efficient enough that it won’t rob you of excess energy after hours in the saddle while being strong enough that it won’t crumple underneath you if you get in a little over your head on that new rock line you keep wondering about.

The 140mm travel segment of the mountain bike market is a crowded one, and it’s important for a bike company to push the envelope in order to stand out from the competition. After looking closely at the Sight, it is apparent that Norco swung for the fences with this bike, as it is jam-packed with cutting-edge technologies.

Advanced Ride Technology (A.R.T.). Like the Revolver, the Range, and other recent models in the Norco full-suspension lineup, the Sight incorporates Norco’s proprietary Advanced Ride Technology (A.R.T.) into its suspension design. And while the core concepts of ART remain the same among all of the frames, Norco’s product engineers view ART as a fluid concept that is adjusted and refined to match the design goals for each specific frame.

According to Engineering Manager PJ Hunton, the Sight was the most difficult of Norco’s new frames to tune because of the influence of pedal kickback on a bike that is meant to pedal like a shorter travel xc rig while being able to descend like a long-legged all mountain bike. However, after plenty of real-world testing, Hunton’s design team settled on what they felt was the optimal balance between pedaling efficiency and controlled suspension action during descending, each of which is a core component of ART.

Tapered Head Tube. At the front of the bike, the Sight features a tapered head tube, which offer frame designers a number of key benefits without having any significant real-world drawbacks. Tapered head tubes allow designers to use larger tubing where the headtube meets the downtube, making the front of the frame stiffer and more resistant to side loading. The result is a frame that allows riders to hold their lines through rough sections of trail without flexing and deflecting all over the place. Additionally, tapered head tubes allow Norco to spec the Sight with cutting edge forks that utilize tapered steerers that are stronger than more traditional 1 1/8” setups without incurring any weight penalties.

Syntace X12 dropouts. Norco first utilized Syntace’s X12 142mm x 12mm dropout system on 2011’s Range and expanded its implementation for 2012. The Sight’s X12 dropouts result in a stiffer and stronger rear end that makes it extremely easy to remove the rear wheel in the event of a puncture or wheel failure. Similarly, the integrated derailleur hanger is stiffer than conventional hangers, and this characteristic results in a part that is less prone to breakage and contributes to more precise shifting on the trails. Like the other X12-equipped bikes in the lineup, designers tucked a spare hanger bolt into the down tube on the non-drive side of the frame.

The Norco Sight incorporates plenty of high tech forgings, shaped tubes, and custom stainless steel hardware as a way of achieving the strength and weight goals set by the design team.

For 2012, Norco has introduced clevis-less pivots on all of their new bike models. Normal pivot points are connected to a frame’s tubing by a welded piece of material called a clevis. Norco’s designers figured out a way to do away with these extraneous bits of material, which results in a stronger, lighter, and stiffer frame. None of the stainless hardware used in the Sight threads into the frame so it is easy and cheap to replace if it happens to be damaged while riding.

Like the Revolver 29” trail bike and the longer-travel Range, the Sight utilizes custom hydroformed tubing that reduces frame weight while improving the strength of the bike, characteristics that contribute to a light and lively frame with eye-catching aesthetics. Similarly, the Sight features Norco’s proprietary Holloform ® one-piece link arm that is designed to minimize rear-end flex and limit the influence of side loads on the rear shock.

Much like the approach taken by Norco’s engineers when designing the Sight, the spec philosophy for the bikes was guided by the desire to create a bike that can climb almost anywhere and make it back down through all but the gnarliest tracks. Suspension-wise, each trim level features a 15mm thru-axle fork with travel adjustment and a Fox rear shock with adjustable ProPedal settings and large volume air cans. The top three trim levels (LE, 1, 2) use 2×10 drivetrains with 38T/26T chainrings while the remaining trim levels (3, Forma 2, Forma 3) use 3×10 drivetrains. All of the bikes in the Sight family are equipped with 11-36t cassettes.

Model specifications and pricing
The 2012 Norco Sight is available in six different trim levels ranging in price from $2900 (USD) all the way up to $9450 (USD). There are two woman-specific designs – the Sight Forma models – that implement geometry and spec changes designed to benefit women riders. Claimed bike weights range from 24lbs to 28lbs.