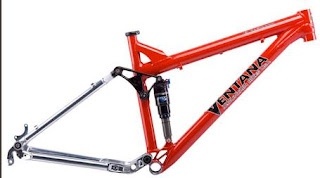 El Bastardo gets 5.5 inches of rear travel, a low bottom-bracket, no compromise all mountain geometry, and Ventana’s legendary lateral stiffness and manufacturing excellence to make it a formidable trail bike. This Bastard’s big wheels, long travel, superb gearing and dialed geometry will leave you grinning and your friends in your wake when you hit the rough.

Ventana Mountain Bikes are the product of over three decades of off-road bicycling experience. Since the early 1970's Sherwood Gibson, one of Ventana's two founders, has been assembling a wealth of bicycle specific product knowledge. Gibson began in 1974 as a BMX competitor in Northern California. He added to his seat-of-the-pants education with three years of high school metal shop, junior college certification in welding and machining, and a Bachelor's degree in Mechanical Engineering from Cal Poly, San Luis Obispo. Gibson's bicycle manufacturing interests first took form in BMX component and sidehack designs that he built in his dad's garage during the week, and raced on the weekends. In 1985 he built his first mountain bike frame-of steel. And by competing in the infancy of mountain bike racing, including the infamous Whisky Town Downhill, Gibson gained critical feedback about the integrity of his concepts.

Ventana Mountain Bikes, USA was formed in late 1988 as a joint venture between Gibson and Steve Blalock of Monterey, California. Gibson and Blalock remained partners until 1991 when Gibson became sole owner. The two shared a common interest in mountain bikes and their construction. Ventana is named for the rugged coastal wilderness in Big Sur, near Blalock's home. The company's first challenge was to produce an elevated chainstay mountain frame without the weight penalty most frame builders of the day were experiencing. The Ventana team succeeded, delivering to the marketplace in 1990 the well received Cone Peak. Mountain Bike Action wrote..."Climbing the Ventana was as efficient a process as any. The bike was stiff, and every pedal stroke went straight into the ground."

Sixteen years later, Gibson still designs every Ventana frame from the ground up to meet his stringent performance standards under his keen eye for aesthetic simplicity and impeccable drive for manufacturing excellence. 2004 brings four new offerings to the Ventana line-up... El Cuervo their 9" DH sled, X-5 their 5" woods bike, El Martillo their criterium racer, and El Martillo CX their cutting edged cyclocross frame. And while the designs have changed, the rave reviews still abound.

From their sexy CNC machined suspension pieces down to their smallest cable stop, every piece, of every Ventana frame, is painstakingly produced by Ventana. While other so called manufacturers market "Hand-Built, American" bikes actually built by large production houses in the U.S. and Taiwan, Ventanas are truly born and manufactured in the same region as the sport itself -Northern California.