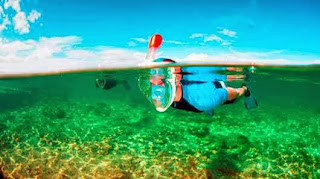 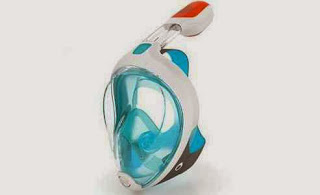 The main problem with it is that it forces the swimmer to breathe through only their mouth, which can feel unnatural. Tribord's new Easybreath mask aims to solve that problem, by allowing natural breathing through the nose or mouth.

The design is actually pretty simple at its core. Instead of covering the user's eyes with goggles and then having a separate tube for breathing through the mouth, Easybreath covers the whole face with one piece, and contains the breathing portion right inside of the mask. Once it's on, the creators promise that the wearer can just breathe naturally.
The mask uses a double airflow system that allows the wearer to take in oxygen through the spot on the top, while allowing them to breath out through a different portion of the tube. This airflow system is what prevents the mask from fogging up while underwater, as the air the user's exhaled air is quickly removed from the mask. Air comes in via the portion the user is looking through and leaves via the outer portion of the mask, further aiding in preventing fog.

Another benefit of the design is the view. While some goggles cut off peripheral vision, Easybreath promises a larger field of vision, and seeing as much of the underwater world as possible is really what snorkeling is all about.

Not much information is available as far as where these will be sold, but Triboard did announce a €39.95 (US$54.64) price tag for when it launches later this year.

The video below provides some demonstrations of the Easybreath mask (English subtitles). 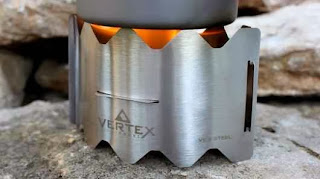 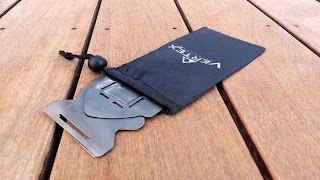 If there's one thing liable to ruin the backpacking experience, it's being weighed down by too much baggage. The problem is there are several things considered essential for the serious backpacker who spends his or her day hiking and his or her nights camping in the wilderness. One of which is a stove. The Vertex Ultralight Backpacking Stove could solve the dilemma of traveling light vs. eating every evening.The Vertex Ultralight Backpacking Stove weighs just 1.8 ounces (50 g) and measures 4.84 x 2.87 x 3.0 inches (12.2 x 7.3 x 7.6 cm) when assembled. When not in use, it folds up to be packed flat, consuming the same amount of space as a typical trail map. The stove features a minimalist design which essentially rids it of any components that could fail in the field. It has no moving parts, takes seconds to assemble, and keeps things extremely simple with a curved design that is currently listed as patent pending.

The stove accommodates two different heating methods. The recommended method is to use fuel tablets, but it also supports the Trangia Spirit Burner. It's made from tempered brushed stainless steel, and supports cooking pots with a minimum diameter of 3.5 inches (8.9 cm). Despite its small stature, it will reportedly boil 16 ounces (454 ml) of water in six to eight minutes using a single fuel tablet.The stove is currently being funded through a Kickstarter campaign that has already reached its goal of US$8,000. Interested parties have until Feb. 16 to pledge, with a pledge of $50 (at the time of writing) being enough to secure one of the stoves if and when the product gets manufactured. Unfortunately the campaign looks to be available exclusively to backers resident in the US.