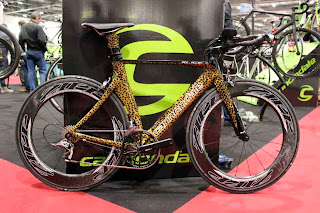 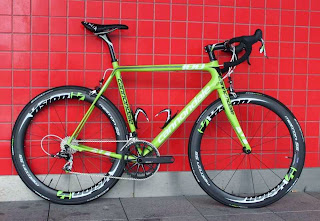 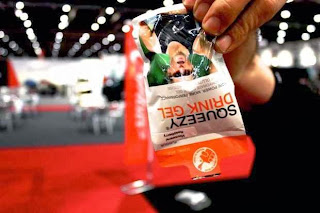 Brilliantly simple (Squeezy’s self-sealing energy gel – a possible solution to the littering that blights the reputation of some sportives?), there was much to celebrate at the ExCeL Centre.

But what else can we learn from the show? Bike fitting services took centre stage – almost literally, with a cluster of stands displaying the latest systems in the centre of the hall – and the choice of brands as large as Specialized and Shimano to make this their only presence at the show might tell us much about the importance they place upon it.

The presence of specialist cycling holiday companies at the show continued to grow, and with the weather in this blighted island going from bad to worse, business among those who provide a convenient escape to sunnier climes (not to mention climbs) is likely to continue to boom. We caught up with two at the LBS.

The biggest bike races in the world are heading the UK and Ireland this summer, and so the absence of stands to promote the Grand Partenza of the Giro d’Italia from Belfast, or of the Grand Depart of the Tour de France from Yorkshire, not to mention the Commonwealth Games was disappointing. Marketing budgets for such costly events will undoubtedly be tight, but was this not a missed opportunity to spread the good news to a receptive audience?

And if you’ll excuse us a moment of self-congratulation, the RCUK test track, voted the most popular attraction by visitors to last year’s show, continued to serve a seemingly insatiable demand, while the inaugural awards of our sister site, Total Women’s Cycling, seemed to attract almost the entire industry – and Laura Trott’s mum and dad.

Here then, without further ado, are five observations on this year’s London Bike Show.

Fit for purpose
This year’s London Bike Show might be described as one at which bike fitting came to town.

Not only did some of the leading thinkers in the field address the International Cyclefit Symposium, staged by Phil Cavell and Jules Wall of Covent Garden’s Cyclefit (men handpicked by Trek Factory Racing to fit the likes of Fabian Cancellara and Jens Voigt to their new machines), but some of the biggest players in the industry exhibited nothing more than their fitting services.

Retul jig, Specialized BG stand, London Bike Show 2014, pic: Timothy John, ©Factory Media
Bike fitting services took centre stage at the 2014 London Bike Show
When companies as large as Specialized and Shimano decide to use a consumer event on the scale of the London Bike Show to display nothing other than their Body Geometry and Bikefitting.com fit services respectively, is it a sign that the bike fitting has come of age? And is the emphasis of such industry giants on service rather than product a reflection of the changing nature in which bicycles are purchased? Shimano’s intended customer for the system it has purchased from and developed with bikefitting.com is the independent bike dealer – a tool that one Shimano insider told us at Eurobike was intended to help the local bike shop “remain relevant”. Similarly, Specialized’s Body Geometry fit system is not limited to its network of concept stores, or even to Specialized bikes.

The greatest interest at the RCUK Test Track was created by the opportunity to ride Canyon bikes – a rare experience for would-be customers of a brand that operates a direct sales model and a step missing from the purchasing process that we know Canyon UK has plans to address. Unable to compete on price with mail order brands and internet retailers, could the increasing recognition of the importance of fit among cyclists be the salvation of the bricks and mortar bike shops that are often the lifeblood of their local cycling community? Specialized, Shimano, and Cannondale, which exhibited its Guru service at the show – three of the biggest players in the industry – seem to believe so.

Carbon remains king, but steel is real and aluminium affordable
The evidence of the London Bike Show is that carbon remains king in the eyes of the cycling industry. Rack upon rack of composite-framed steeds commanded the attention of the thousands of cyclists who visited the show, with scarcely a metal machine in sight.


Singular’s chromoly steel all-rounder, with eccentric bottom bracket, hydraulic disc brakes, and ‘cross tyres, was one of the more interesting machines at the 2014 London Bike Show
Kinesis UK put the collection of aluminium and titanium steeds that we reported from the trade-only Core Bike Show before the public, Cyclefit granted pride of place to Matthew Souter’s achingly beautiful Reynolds 953-chassised Saffron, while designer Sam Alison displayed a range of steel and aluminium-framed machines from his Singular brand, including a disc-equipped, chromoly all-rounder with eccentric bottom bracket, configured as a single-speed. Genuinely interesting.

Many of the hundreds of visitors to the RCUK Test Track had come for the opportunity to ride a carbon bike for the first time. A bad thing? Not necessarily: carbon is, of course, light, stiff, and increasingly affordable. But the persistent belief among new cyclists that all carbon lay-ups are equal, that aluminium is yesterday’s material, and that only by postmen ride steel bikes in the 21st century shows that the cycle industry has much to do in providing its customers with the information necessary to make an informed purchasing decision. The number of test track visitors genuinely surprised by the performance of the aluminium Canyon Ultimate AL and Rose Bikes Xeon RS-3000 was instructive.


Have bike, will travel
The rise and rise of cycling-specific holidays continues unabated, if the number of dedicated tour operators who exhibited at the London Bike Show can be taken as a guide.

Nick Miles, from East Sussex-based tour operator Rpm90, now in its third year of organising cycle tours, said what while trips to sample the iconic climbs of the Alps and Pyrenees were likely to remain popular, increasing numbers of his customers were riding the hills of Tuscany – l’Eroica country.

Road bike holidays flyer, Girona Cycle Centre, London Bike Show 2014, pic: Timothy John, ©Factory Media
Cycle-specific holiday companies were in abundance at the London Bike Show. A growing market of ‘high-level’ cyclists and appalling weather in the UK has expanded the market
“High-level cyclists”, with the necessary fitness levels to make the most of the iconic roads of France and Italy when they arrive, continue to fuel the interest in cycling-specific holidays, he believes. “It’s nice to see that there’s an investment in the sport at the higher level, but it’s not just people who want the nice bike, but they are fit enough to ride it and doing well in the sport.” The characterisation of cycling’s newest cohort as having “all the gear and no idea” is inaccurate, he says.

Saskia Welch from the Girona Cycle Centre said that climate – the terrible weather in Britain and the almost year-round dry roads of destinations like Girona – provides a powerful incentive for UK cyclists to seek more encouraging conditions than those of home in which to train. “Training in the weather in the UK is challenging,” she says. “You have to wear your whole wardrobe to go out. It’s a bigger step to go out and train. In Girona, it’s sunny and you just want to go out and ride your bike.”

Countries like France, Spain, and Italy – cycling’s heartlands – have not been slow to recognise the enormous growth in the popularity of the sport in the UK. This June, Girona will close the roads of its medieval town centre for a ‘nocturne’ ride in which cyclists will ride in safety at night on traffic-free roads before a gran fondo event the following day. Neither have companies in the UK been slow to tailor foreign breaks to meet the needs of cyclists from our own blighted shores. The continued harsh winters suffered by the UK are unlikely to slow demand any time soon.


No show for the biggest races bound for Britain
The biggest bike races in the world will be held in Britain this year, but visitors to the ExCeL Centre unaware that the Grand Partenza of the Giro d’Italia will roll out of Belfast on Friday May 9, that Yorkshire has pledged to host “the grandest of Grand Départs” from Leeds on July 5, or that Glasgow will host the Commonwealth Games from July 23 would have left none the wiser.

Evidence that the UK is a force in world cycling powerful enough to draw the sport’s biggest events to its shores was in short supply at the ExCeL Centre, with the brilliant exception of Summit Finish, and their miniature kilometre markers.

Summit Finish kilometre marker, London Bike Show, pic: Timothy John, ©Factory Media
The world’s biggest bike race is coming to Yorkshire in July, but the only evidence we could find at the London Bike Show were Summit Finish’s wonderful Plaster of Paris kilometre markers
The meteoric rise in popularity enjoyed by cycling since the Beijing Games owes much to the success of the nation’s elite riders. The success of Wiggins, Froome, Cavendish, Trott et al, all still in their prime, cannot be celebrated enough, and Sir Chris Hoy’s presence at the show, in person and on the giant hoardings of the brands for whom he is an ambassador, provided a tangible demonstration of the esteem in which the public holds its cycling heroes.

It is that willingness to support our cycling heroes at the roadside that has brought the ASO and RCS to Britain and Ireland this year, and which in part has helped Glasgow to win the Commonwealth Games. The presence of Mark Cavendish at two of the three events and the likelihood of him providing a home victory is unlikely to have escaped the attention of those who assessed the bids to host the events. The races may well escape the attention of visitors to the London Bike Show, however. The absence of the various commercial organisations and tourist boards promoting the races from the ExCeL Centre represents a significant missed opportunity, both for the events and for the sport. 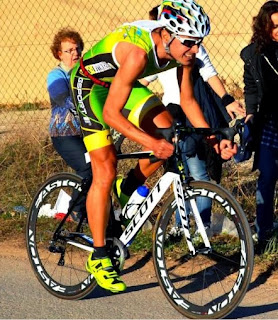