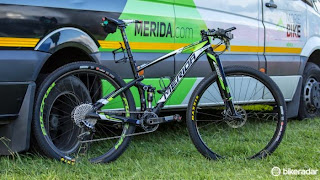 With a marquee full of tired Absa Cape Epic riders, Jose Antonio Hermida Ramos had the whole place laughing. His relaxed manner – combined with consistent race results – has made the 36-year old Spaniard popular with the crowds.

A 2010 cross country world champion and a top-10 finisher at the past four Olympic games (and 2004 silver medalist), he entered the 2015 Absa Cape Epic with Multivan Merida teammate Rudi Van Houts in the hope of a solid general classification result. Sadly, it wasn’t their year, with Hermida plagued by stomach issues for much of the race. The pair finished just off the podium in a still impressive fourth.


The 2015 Absa Cape Epic was a tough day at the office for Hermida (image credit: Nick Muzik/Cape Epic/SPORTZPICS)

Last time we caught up with Hermida, he mentioned that his usual preference is for a hardtail – except in endurance races. “I’m a hardtail rider, but at stage races such as Cape Epic I use full suspension. On those longer races where you're often improvising to the changing terrain, the dual suspension affords you that extra control and comfort. But, in a cross country race where we learn every rock and root, the acceleration of a hardtail makes it the obvious choice,“ Hermida said last year.

Bearing this in mind, it wasn’t surprising to see Hermida and the rest of the team on the Merida Ninety-Nine 9.Team. Gossip has it that this full-carbon, 100mm travel, dual suspension 29er will receive a major overhaul for 2016, but the team were solely racing the current 2015 version at the Cape Epic.

Last year, we weighed Hermida's Big Nine CF Team hardtail at a competitively light 8.8kg – a fair difference when compared to the 11.4kg of his Cape Epic ride. The spares, GoPro and other accessories attached to the bike are mostly to blame, but it also shows just how rugged and punishing the Cape Epic can be on equipment, and that riders must use appropriate components.

While the likes of Karl Platt and Alban Lakata had their RockShox suspension set up with a single ‘Full-Sprint’ lockout lever, Hermida unusually uses two separate levers for independent control of his suspension. We suspect that this is down to his hardtail leanings, because this setup would enable him to lock out the rear shock alone at times.

Just as with his hardtail, the bigger 29er wheel means some modifications have been made to get the handlebars lower. This includes removing the headset topcap and running the stem directly on the top bearing. As we mentioned above, the Cape Epic is notoriously harsh on components, so we suspect this headset bearing will have been replaced during the event.

Like the riders on the top two steps of the Cape Epic podium, Hermida was using SRAM’s XX1 single-ring drivetrain. Where we’ve previously seen him race cross-country on a large 36t chainring, the Cape Epic had him spinning a smaller 32t ring. An XX1 Gripshift shifter handled Merida's moves through the 10-42t cassette.

Despite being sponsored by Fulcrum wheels, only the rear hoop of Hermida’s Cape Epic bike was actually from Fulcrum – a RED Carbon 29. Up front, the RockShox RS-1 fork dictates a specific hub and so a SRAM ‘Predicitive Steering’ hub was laced to what looked like a Stan’s Race Gold rim.


The Maxxis Ikon is a durable choice

Hermida had previously told us he uses a tube in the front to ensure the tyre doesn’t roll when cornering hard. Given the thorns that cause havoc for nearly all riders, we’d assume that Hermida had both his Maxxis Ikon tyres set up tubeless and with plenty of sealant. In a 2.2in width, these models feature a triple-compound rubber and additional puncture protection.

The contact points are no different to that of his hardtail. The saddle is a custom-covered Prologo Scratch with CPC grippers on the surface. Sitting between his alloy Procraft bar ends is a 660mm wide handlebar, held by a 110mm length stem of the PRC (Procraft Racing Components) label.

Hermida has called upon various accessories to handle water and spares portage. A Specialized SWAT EMT multi-tool sits beneath his bottle cage. An elastic and velcro ‘SpeedSleev’ holds a latex tube, CO2 and tyre lever beneath his saddle. Plugging his handlebars is a Sahmurai Sword tubeless puncture repair kit. Lastly, a second bottle cage sits off his seatpost with clamps from KCNC. 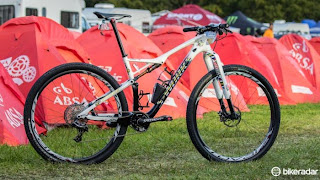 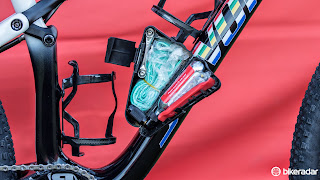 The Swiss rider completes his long standing career as a professional mountain biker with World Championship gold medals in both cross-country and marathon (three times), along with winning the cross country World Cup overall in 2004 and 2005. He’s also stood on the podium at the Olympics and has 10 World Cup wins to his name.

For the second and last time, Sauser partnered with Jaroslav Kulhavy for the eight-day race in South Africa. The two convincingly won the event, giving Sauser a dream farewell and a record five wins for the iconic stage race.

Along with riding in memory of former friend and team-mate Burry Stander, Sauser was riding for a charity he helped to establish – Songo.info. Started by Songo Fipaza, a community leader based in the Western Cape township of Kayamandi, Songo.info aims to improve the lives of children living in South African townships by enabling them to participate in recreational and competitive sports activities organised as part of an overall development plan.


Sauser and Kulhavy weren't, moreover, simply raising awareness of Songo.info'ssion to use sport as a tool to tackle some of South Africa's startling inequalities. Both riders' custom Specialized bikes were auctioned off after the race, raising more than US$29,000 for the charity.

Readers who've followed Sauser’s career will know he’s extremely particular about his equipment – and very much a weight weenie. So despite us having covered Kulhavy’s Cape Epic Specialized S-Works Epic WC 29 just a week ago, there are plenty of equipment choices that differentiate these two visually identical Specialized Epics.

Like Kulhavy, Sauser was riding an S-Works Epic WC 29 in a size large matched with a RockShox RS-1 fork. It's covered in custom paint and decals to showcase the Songo.info foundation, the South African flag (for the Cape Epic and Burry Stander) and his World Champion rainbow stripes.

For a race like the Cape Epic, Sauser believes the Specialized Epic offers real advantages – the biggest being "the Brain (suspension), SWAT and two water bottles”.

The Specialized Brain suspension is unique in that it remains locked out until a force from beneath the bike (like a bump on the trail) activates it. We were told Sauser’s rear suspension had a 2016 ‘World Cup’ tune, said to be stiffer yet with the same opening force required of previous versions.

The rough and technical terrain of the Absa Cape Epic meant that Sauser was using a 100mm fork instead of the shortened 90mm option he’d normally race in Europe. Likewise, we were told his suspension setup was 5psi softer for the race.

Apparently Sauser really likes the SWAT box, which holds his spares. One reason is that he doesn’t need to worry about packing his pockets the morning of the stage.


A sneaky look inside shows a latex tube as spare

“During a race situation when you are in a hurry, you need to know which side it opens and put the bike down on the right side. In training I place an Allen key in the frame SWAT holder, but for racing it goes into the SWAT box too – simpler for me to access and [I] know everything is together,” Sauser said.

Although the Cape Epic demands durability, Sauser’s weight weenie habits are still obviously prevalent throughout this special ride. So much so, in fact, that apparently Kulhavy was responsible for carrying the chain breaker.


Bolt-through axles instead of quick releases are lighter and apparently stiffer. On the subject of lighter, check the rotor bolts

One such example can be seen at Sauser’s brake rotors, where three titanium bolts alternate with three Carbon-Ti Torx alloy bolts. A carbon-Ti headset top cap is another part that saves a few further grams.


Sauser has been riding asymmetric chainrings since 2009

While race partner Kulhavy was using a Quarq power meter, Sauser instead selected a far lighter Specialized S-Works carbon crank. Something highly unusual in mountain biking is the use of a Q-Rings asymmetrical (not round) narrow-wide chainring in a relatively large 34t size.

This asymmetric single chainring is matched to a standard SRAM XX1 10-42t cassette and rear derailleur. Sauser was using this with a normal SRAM XX1 trigger shifter.

In downhill racing we occasionally see riders mix and match lighter brake levers with larger calipers. In this case, Sauser does the reverse with SRAM Guide levers matched to SRAM Red calipers – products originally designed for cyclocross and road riding, which should result in the lightest system currently possible from SRAM.

Elsewhere Sauser picked Look S-Track Carbon Ti pedals, which are claimed to weigh 244g for the pair. These pedals are encased by a cage for greater surface area and stability at the foot. This composite cage is available from Look – aptly named the ‘S-Track Sauser Cage’, it adds a claimed 25g.

Just like Kulhavy, Sauser was racing relatively narrow 1.95in width treads in the Specialized Renegade Control model. These 29er models are made a little more voluminous by being mounted to wide-rimmed Roval Control SL wheels and so in reality probably hold a similar amount of air to wider tyres on common narrower rims.

Being every inch the professional with his equipment, Sauser is aware that the heat of the Absa Cape Epic will often raise his tyre pressure by 2psi. With this in mind, he started each day with 26/27psi.

Silicone grips – which we’re told are from Specialized – are the same as Kulhavy's. Although they do look like the highly popular grips from ESI, it could also be that Specialized has a new lightweight grip coming out soon.

Sauser’s riding position is reasonably far forward, with a straight seatpost. The saddle nose is lightly dipped down for more power on the climbs – although it's nowhere near as exaggerated as his race partner Kulhavy’s setup.

Of all the pro-bikes we weighed at the Absa Cape Epic, this bike was second best to the incredibly light Canyon Lux CF of Alban Lakata. With spares, but without a GoPro and Garmin head unit, the bike weighed 10.9kg (24lb) – heavier than we had expected.