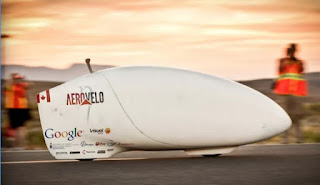 This bike just broke the world record for fastest human-powered vehicle By Sean O'Kane on September 18, 2015 10:12 am Email @sokane1 What's the fastest you've ever gone on a bicycle? Maybe 20, close to 30 miles per hour on a hill? The AeroVelo team just more than doubled that in their bullet-shaped "speedbike," reaching a speed of 85.71 miles per hour and breaking the world record for fastest human-powered vehicle at the same time. The news comes from Battle Mountain, Nevada, where the World Human Powered Speed Challenge is currently taking place. In it, competitors are given 8 kilometers to build up their speed before reaching a flat section that stretches 200 meters. It's there that the speeds are measured and recorded, and it's there that AeroVelo broke the previous record of 83.13 miles per hour. A clip from the team's 2014 attempt at breaking the record. This is no conventional bike that the team was riding, though. The speedbike is a completely enclosed, bullet-shaped vehicle that forces the pilot to lean back almost completely horizontal. A combination of weight, aerodynamics, and sheer physical endurance allows the bike to reach such ludicrous speeds. It's like the fastest human hamster wheel you'll ever see. IT'S LIKE THE FASTEST HUMAN HAMSTER WHEEL YOU'LL EVER SEE The team set the record yesterday, but the event in Nevada isn't over yet, so that top speed could still be eclipsed. You can keep up with the contest at the International Human Powered Vehicle Association website, or follow along with the team on Twitter.