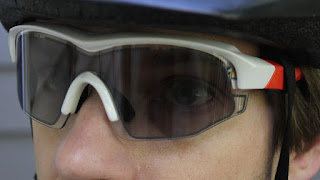 Review: Uvex Variotronic cycling glasses change tint with the press of a button – or on their own
BEN COXWORTH SEPTEMBER 23, 2015
Photochromic glasses are great for things like heading out on evening bike rides, as their tint gradually lightens while the sun goes down. If you're bursting in and out of shadowy forests or zipping through dark tunnels, however, the slow reaction time of such glasses just can't keep up. That's where Uvex's Variotronic glasses come in, which use electrochromic tech to change tint in just a tenth of a second. I recently got to try a pair out, and there's nothing shady about them.


The Variotronics utilize patented e-Tint technology, which was initially developed by Ohio-based company AlphaMicron for military use. Dutch AlphaMicron subsidiary Ctrl Eyewear recently adapted the system for use in its Ctrl One cycling/sport glasses, then entered a technology-sharing agreement with Uvex. As a result, the Variotronics and the Ctrl Ones are essentially the same glasses, just sold under different brand names.

In both cases, the glasses incorporate a thin liquid crystal film, sandwiched between two polycarbonate lenses. When a low-voltage electrical current is applied, the alignment of those crystals changes in such a way that the film blocks more light. Even in its "resting" state, however, the film isn't completely clear – it still blocks 36 percent of incoming light, as opposed to 84 percent in its "active" state. In either mode, it also blocks 100 percent of UVA, UVB and UVC rays.The glasses' tinting can be manually turned on and off by pressing a button on the temple arm, although they can also be set to switch back and forth automatically via a light sensor just above that button. When I first tried them in Auto, I found that the factory tint-changing threshold wasn't quite to my liking – I wanted them to lighten up in less dark conditions than they currently were. Going into wooded areas, I found that I was switching to manual to lighten them myself.

Fortunately though, it's possible to reset that threshold to your own liking. It involves putting them in Auto, going into an area with the type of lighting at which you'd like them to lighten (but where they're currently not lightening), and then holding down the button for several seconds. I have to admit, it took me several tries and a few emails to Ctrl before I got the hang of it, although I was working without an instruction manual.Even once mastered, resetting the threshold is definitely a matter of trial and error. After my first "successful" attempt at changing it, I found that the glasses were now switching back and forth too often, as I'd overcompensated. A subsequent reset in a darker area took care of that, though.

I also noticed that reflective surfaces such as manhole covers and car windshields took on a shimmering almost iridescent look, causing them to pop out at me like characters in a 3D movie. Ctrl told me that this is due to the polarizing effect of the lenses, and that it's a feature which may ultimately be dropped – I'd certainly vote to do so.It would also be good if the glasses could go completely clear. I used them on a night ride and found that while I could adequately see where I was going, I could still see better without them.

All in all, though, the automatic tint-changing feature is quite a nice one. The Variotronics are also comfortable, distortion-free, and offer a decent lithium-ion battery life of approximately 50 hours per USB charge – they only use current when darkened, and stay in lightened mode if the battery dies.The Uvex glasses should be available in stores and online later this fall (Northern Hemisphere), priced at US$350. Ctrl is currently taking preorders through its website, and expects its glasses to start shipping in November or December.

$200USD + Envío
CTRL ONE 25% Discount
CTRL ONE 25% Discount during the InDemand Campaign. When deliveries start the prices will increase to $275. Add $10 per set of glasses for a prescription mount add-on. We will email you in a couple of weeks to allow you to pick your preferred frame and lens color. 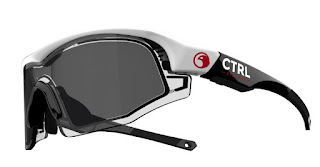