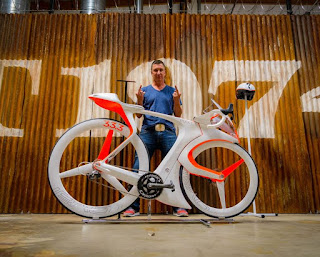 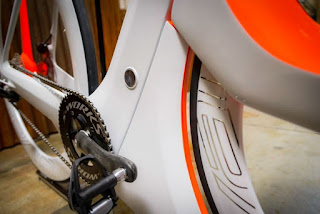 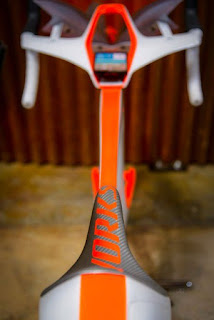 Ever wonder why you don't see things like recumbents in the Tour de France? Well, it's because of the Union Cycliste Internationale (UCI), which is the world governing body for bicycle racing. Among other things, the UCI places unwavering restrictions on the design of racing bikes. While this is intended to keep some racers from having an unfair advantage, many people feel that it also holds back the evolution of bikes designed for non-racers. That's why Specialized’s Creative Director, Robert Egger, created the fUCI concept bike. It's a speed bike designed without UCI restrictions in mind ... and we'll let you figure out what the F in its name stands for.

That motor is located in the bottom bracket, and is intended mainly for assistance in getting the bike going from a stop. Its lithium battery can be removed for charging, although it can also be left in place and juiced up by placing the whole bike in an accompanying charging stand. For off-grid use, that stand is equipped with a solar panel.

Another electronic feature of the fUCI is the option of smartphone integration with onboard sensors. By placing their phone in its docking area, users can do things like disabling the bike when leaving it parked; planning and following routes; receiving warnings of approaching cars; monitoring tire pressure; and, setting the lights to automatically come on when it gets dark outside – yep, the fUCI also has front and rear lights. In fact, the brake lights are built into a magnetically-latched mini cargo compartment, suitable for carrying things like a jacket or a spare tube.


Aerodynamic fairings are also not allowed by the UCI, so naturally the fUCI has one, in the form of a motorcycle-like windscreen. To top things off, the bike's frame design – which isn't the usual main triangle and rear triangle – is yet another rule-breaker.

"The UCI really caters to a very small population, but there’s so many other people out there who couldn’t care less about the UCI," says Egger. "They don’t follow the racing and they don’t even know all the limitations that are put on bikes for the UCI riders. So, my feeling was let’s design a bike for someone who really just wants to go fast on a road bike."