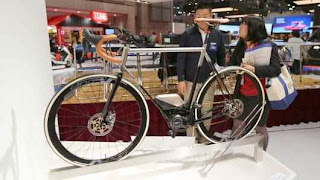 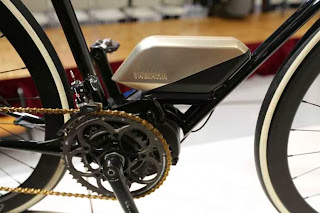 Yamaha celebrates 20 years of pedal-electric bicycles with YPJ-01 concept
While most of us know Yamaha for its motorcycles or snowmobiles, the company has also been working on pedal-electric bicycles for the past 20 years, as part of its PAS project. Marking that anniversary, Yamaha produced the eye-catching one-off YPJ-01, which we recently spied at the Tokyo Motor Show.

The bike also features smartphone integration, allowing the rider to use their handlebar-mounted mobile device to view "the bicycle's information." Little is available in the way of specs (such as weight), although we did spot a nice set of Campagnolo Super Record derailleurs on the bike.

There's no word on when or if we'll ever be able to buy a YPJ-01 of our own, or if it's purely a design exercise. 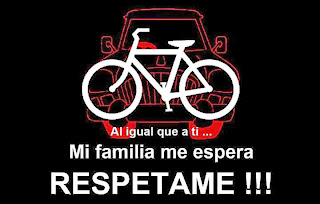 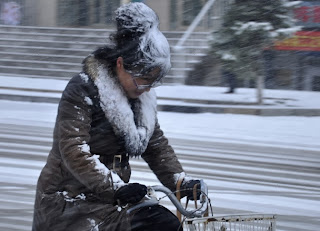 Officially, the first day of winter is Dec. 21. Unofficially, it's damn cold outside, the sky is dark by 5 p.m., and spending more than five minutes on my bicycle turns my nose into a snot fountain. Winter is coming, and I am not prepared.

Truthfully, I've never been prepared to bike in what passes for winter where I live, in Washington, D.C. By late October, I start riding to work with socks on my hands. By November, I'm layering a sweat shirt and a shapeless leather jacket from JCPenney. Biking at all between December and March has, in past years, meant sacrificing my dignity for warmth. And that's if I decide to bike through the cold. (The last two winters, I let my tires go flat. Such fail.)

But this year, I've told myself, is going to be different. It can be different for you, too.

Riding in the winter is so cold! What can I wear to change that?

Honestly? Nothing. No matter what you wear, it will be cold outside. But there is a trick, and it is to give as much thought to the end of your commute as the beginning. While it initially feels really good to wear an undershirt and a t-shirt and a sweatshirt and a puffer jacket and a scarf and ear muffs and a balaclava and super thick gloves and sheepskin chaps, you will be a sweaty, swampy-butted mess when you finally get where you are going. "I do see plenty of people who are biking in layers of street clothes, but it’s easier to manage your temperature with more technical clothing," says David Watson, director of MassBike, the Massachusetts bicycle coalition. "It’s all about not overdressing."

Watson suggests starting with a good base layer for your upper body. Under Armour's Coldgear line is designed to keep you warm (and dry) without having to bulk up. Nike has a line of base layer tops as well. So does REI. One of these shirts will run you $50-$100. If that's a lot of money to spend on something you'll never wear to a party, remember that you only have to buy one, and that doing so will keep you from soaking several levels of street clothes every time you ride. On top of that base layer, you can wear a light weight shell jacket, preferably one in a really bright, eye-catching color that will keep you from getting run over during your depressingly dark commute home. You can take somewhat similar steps for your lower body. The above companies all make base layer pants (you can also use tights).

What about my hands? My ears? My eyes?

Riding with cold hands and ears is awful. For the former, Watson suggests considering a pair of lobster gloves, AKA ninja hands. And if you want something that will attract even more attention, you could always get some bar mitts (pictured at right). Lobster claws will cost you about $80. The bar mitts, around $40.

As for your head: Cycling caps may look silly or pretentious or ugly (sometimes all three) but a good winterized one can come in really handy. For around $50, you can get a handmade wool cycling cap from Red Dot. It will fit under your helmet and over your ears (and skull, duh).

If your eyes bother you while riding in the cold, some cheap motorcycle glasses might do the trick, just make sure the lenses are clear. Also, you will look like a badass.

Jesus, this list is getting expensive. Isn't there a more affordable way to stay warm in the winter? I am not made of money.

Hey, me neither. And really you don't have to be. For the last few weeks, I have been rocking some warm-enough gloves from Uniqlo that cost me a whopping $12. Yes, they are about as close to fancy as a can of SPAM, and the Uniqlo website says to never wash them (which translates to "throw them away when they get dirty"), but so what? I can feel my fingers when I get to work, and that's why I'm wearing gloves in the first place.

Don't want to drop $50 on a hat? For around $10 (plus or minus $5), you can buy the kind of ear warmers runners use. They fit perfectly under a helmet and they don't induce head sweat (which is a thing). You can also try some Cat-Ears, which are tailor made to fit your bike helmet and keep your ears warm, and they cost about $15. If you are bald and poor/cheap, you can tape over the vents in your helmet.

As for those base layers: You don't absolutely need them, but unlike the hat and gloves, the point of going hi-tech is that doing so strikes a balance that your street clothes can't. If you insist on DIY, you can layer a light t-shirt, a sweat shirt and a wind-breaker. It'll feel too thin until you start riding, and realize it's just fine.

There has to be more to winter riding than just the clothes, right? Like safety? And staying visible?

Yes, thank you. Safety is very important. Riding conditions are more dangerous in the winter and there are fewer hours of daylight. Which means not only do you need to invest in a shell jacket that is brightly colored, you need to give your lights (you do have lights, right?) a hard look.

"Lighting is the number one safety concern when fall comes on," Watson says. "A lot of people realize they’re supposed to have lights, but they get the smallest, cheapest lights they can find just to be in compliance with the law. They don’t realize it’s not about compliance, it’s about being visible to drivers." If you live in a place that doesn't require you to have lights, you should still get them, and they should be bright. Planet Bike has a nice combination package that contains a blinking red light for the back of your back and a blinking white light for the handlebars.

But do note: That Planet Bike headlight won't illuminate a dark trail or bike path. If your route home isn't well lit, you either need to pick a well-lit alternative, or prepare yourself to fork up some serious cash for a good handlebar light that can act as an actual headlight (the cheapest start at around $60).

Lots of things will freeze, particularly if you have to lock your bike outside while at work. In the event your u-lock freezes, you can heat up the metal part of your key with a lighter and stick it in the keyhole. No lighter? If you have hand sanitizer, you can squirt some of that on your key or in the hole of the lock.

If you keep your chain and drivetrain appropriately lubed up, your bike won't freeze, but rust can become an issue once there's salt on the roads. To keep your bike alive through the winter, you should wipe down the frame and all its components as often as possible. Like, every night. Particularly if you've ridden through snow or slush that day.

And even though you didn't ask, yes, it's possible that your beard/snot will freeze.

Speaking of snow. Can I ride in it?

Schwalbe makes studded snow tires starting at $54.35. If that's too rich for your blood, you can make your own snow tires with these instructions. If you're only looking at a little bit of snow (but no ice), you can take some of the air out of your tires. Also? Avoid clipless pedals and go with grippy platforms.

If you choose to ride on a city street after a snowfall, you'll need to bike differently. Snowplows pile the stuff where you'd normally be riding, which means you'll have to be more aggressive in creating space for yourself on the road.

"You may have to be even more confident in your riding, and in taking a line that you may ordinarily be," says Watson. "A lot of people may want to stay to the right, but when there’s a lot of snow piled up, you really need to take the lane."

OK, so now I know how to get to work in the winter. What do I about all these clothes when I get there?

Most bike commuters will attest that having to pack their work clothes is the biggest downside of biking. This is especially true in colder months when wearing street clothes to work becomes more complicated. If you're cool with packing a bag, but you're worried about wrinkles, you should roll your clothes. Flight attendants do this, and they know more about packing than most people.

If you want to minimize what you have to pack each day (and thus, how much time you spend packing each morning) keep some things at work, like a couple of blazers and pairs of shoes. Heavy coats are difficult to pack and a pain to wear while biking. Leaving one at the office will keep you from having to layer inappropriate clothes on your ride. If you're using base layers with a light shell, you won't have a heap of sweaty clothes to hide and will just be able to tuck everything back into your backpack. (Dottie, of the website Let's Go Ride a Bike, suggests that in the winter, women who wear makeup wait to apply it until they get to the office.)

Now that I know I can do this, do I actually have to?

When I called up Watson for advice on riding through my first winter, I expected him to tell me it was a do-or-die kind of thing. Turns out it's not. "We want people to work bicycling into their daily lives however they’re comfortable," he says. Heck, there are days when even Watson doesn't do his full bike commute. "Instead of riding the 7.5 miles from my house to our office, I will just ride a couple of miles from my house to the transit station. I don’t have to get all bundled up, I can just wear my regular clothes for the day. Then I take the T downtown."

His big piece of advice for first timers "is don’t just write it off." Also? "Bring plenty of Kleenex."