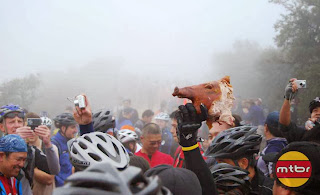 Mexico: A Traveler's Guide to Safety Over Sensationalism
http://www.amar.org.mx


Mexico has very low violent crime rates. Tourists are statistically safer in Mexico and much less likely to be a victim of violent crime than in the US, Canada and many other countries regarded as safe.
Baja, California - Mexico, one of the world's great travel destinations, is often singled out for violent crime without telling the whole story. While there is sporadic violence along parts of the U.S. border, the majority of Mexico's key tourism areas are not only safe, but safer than many other popular tourism areas.

While the media often portrays Mexico as the most dangerous place on earth, it is statistically quite safe. According to NationMaster.com which uses U.N.-based data, Mexico doesn't even make the list of the 36 nations with the highest murder rates. Mild-mannered nations like Sweden and Switzerland top Mexico for murders on NationMaster.com. The assault rate in the U.S. is nearly 5 times greater than that of Mexico in the independent Prominix report adjusted for under-reported crime.

Even when we add on independent estimates for unreported homicides, Mexico ranks 21st behind many popular vacation destinations. Places we think of as idyllic Caribbean retreats have double, triple, even quadruple the murder rates of Mexico. Mexico's famous vacation areas are even safer than the averaged statistics, and even safer still for tourists.

The Yucatan is as safe as rural U.S. states.

The magnificent beaches and ancient ruins of the Mexican State of Yucatan are among the safest and most spectacular resort beaches in the world. Yucatan's low homicide rate is slightly lower than the rural U.S. States of Wyoming, Montana, Oregon and Maine.

Mexico is safer than many cities in the U.S.

More than 150,000 Americans safely visit Mexico every day. And while the media sensationalizes stories of violence in Mexico, Mexico is safer than many major U.S. cities. Travelers feel relatively safe visiting popular U.S. cities like Miami, Philadelphia, Chicago, New Orleans, Washington D.C, or Atlanta. Visitors from around the world enjoy these vibrant cities in relative, reasonable safety. Yet each of these cities is statistically less safe than Mexico.

In the debate on immigration reform in the US, the facts on safety in Mexico have become a casualty of politics. To change public opinion and policy, politicians sometimes throw fuel on the fire. If you make up an exciting story about "severed heads in the desert", it gets a lot of attention and people believe it. The governor of Arizona admitted this story was baseless, but only after months of damage was successfully inflicted to the image of Mexico. The homicide rates above are facts from the FBI, not political fabrications.

New Orleans is beloved and its renaissance is showcased in the news. The FBI reports the murder rate of New Orleans is declining, but it is nearly 4 times higher than all of Mexico and over 5 times higher than Mexico City. New Orleans is still an amazing place to visit and the Media is right to champion this inspirational city. But Mexico is at least as remarkable and there is a clear difference in how each of these storied destinations is portrayed in contemporary news.

Understanding the size and scope of Mexico

Mexico is huge, ranking 14th in the world, and spanning over 2,000 miles from end to end. Mexico is a nation of 31 states as diverse as those in the U.S. and is larger than the states from Texas to Maine. Canceling a vacation to Mexico because of isolated border violence would be like canceling a vacation to Orlando because of the Boston Bombings. People didn't cancel trips to Dallas or New Orleans in the aftermath of mass shootings in Arizona, Colorado or Connecticut, because they simply aren't related. Yet Dallas and New Orleans are closer to border violence than many of Mexico's peaceful tourist areas.

The U.S. State Department in Washington issues warnings about Mexico, yet Washington D.C. is four times more deadly than Mexico City. Washington's murder rate has been cut almost in half in the last 10 years, but it still averages 24 per 100,000 vs. only 8-9 per 100,000 in Mexico City. How do you suppose the U.S. State department would feel if the Mexican government posted travel warnings for the U.S. capital? Mexico City is a cultural treasure that is larger than New York, London or Paris. In fact, it is about the same size as London and Paris combined.

"Mexico's violence not as widespread as it seems."

After months of sensationalized stories about Mexico's border violence, USA Today published a story about the media hype. While the story itself became an opportunity to re-tell some sensational tales, it did set the record straight by finally comparing U.S. and Mexican homocide figures.

The U.S. Assault rate is 5 times higher than Mexico's. Mexico's violent crime rates for Assault, Kidnapping and Rape are substantially lower than Canada's and yet the U.S. State Department issues no such warnings for Canada. The rate for Rape in the U.S. is more than double the rate in Mexico. The numbers in the charts below have been adjusted for unreported crime from the respected 2012 Prominix report and are the most accurate statistics available on this subject.

Asociacion Mexicana de Asistencia en el Retiro (AMAR) is a non-profit organization dedicated to encouraging and helping people from outside Mexico to retire in this country. Its mission is based on freedom, trust, well-being, and security for retirees making their future home in Mexico. For more information, visit the website.