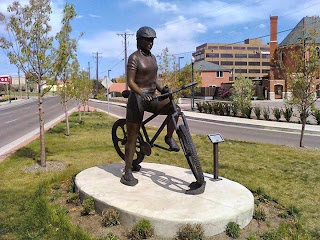 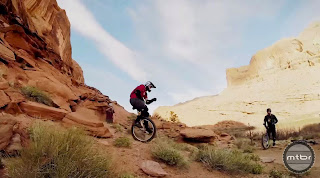 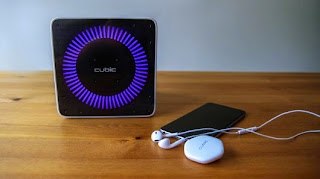 Cubic mixes Siri, Google Now and Samantha from "Her"

A Russian company is working to perfect an interesting new digital personal assistant that could bridge the gap between Google Now and Siri and more futuristic artificial intelligence concepts like Samantha, Joaquin Phoenix's digital companion in the movie Her.

Cubic's 'Home Cube' could compete with Amazon EchoCubic's 'Power Badge'Cubic is based in MoscowCubic's 'Home Cube' could compete with Amazon EchoView all
Cubic Robotics launched an Indiegogo crowdfunding campaign this week for its first device, Cubic, which is a tabletop device similar to the recently announced Amazon Echo. But Cubic goes much further, working across both Android and iOS to integrate with dozens of apps and services like Evernote, Dropbox and Facebook, as well as home automation systems like Nest and wearables like Jawbone and fitbit.

The tabletop unit is shown in demonstration videos being able to pick up queries and commands from across a large room, using a long-distance voice recognition technology that Cubic says it has patented. Cubic says its "Home Cube" can carry on a conversation from up to 25 feet away.

The company also says it has a patent on its "multi-topic conversation support system," allowing it to handle multiple commands and questions in the course of a normal conversation. This capability also seems to be carried off in the demo.

In addition to the open platform software that powers Cubic, the full package also includes a wearable badge and headphones so you can take Cubic and its occasional Google-esque reminders and recommendations with you wherever you go.

If the pitch video is to be believed, Cubic basically controls your entire digital life using natural language recognition and carries the whole thing off with a sassy sense of humor that's somewhere in between Siri and Samantha.

My first impression is that the whole thing just seems a little too good to be true, especially coming from a small team based out of Moscow, a place from which most of the pitches destined for my inbox never make it past spam filters.

That's not to say that Cubic the product is a scam or that Cubic Robotics is a spam operation. The company's CEO Yury Burov seems to be the real deal – if you speak Russian, you can watch a TED talk he gave in Moscow about robots with personality.But what Cubic is talking about accomplishing is above and beyond what Apple has been able to pull off with Siri and its billions of dollar worth of cash. Further, when I visited the headquarters of Motorola in September for the launch of the Moto 360 smartwatch and new Moto X and Moto G, they also demonstrated the Moto Hint earpiece, which, when paired with Google Now, strikes me as very similar to what Cubic is trying to put together. Yet, early reviews of the Moto Hint have not been so hot, and the company has done little to push it.

The takeaway is that this kind of comprehensive and immersive experience is difficult to pull off, even with big time backing. Cubic has managed to create its Home Cube and the software engine behind it over the past two years with just $600,000 in angel investment and now is hoping to crowdfund at least $100,000 more. We will have to wait and see if that's enough to take an impressive prototype and concept even further. I'm rooting for them, but I remain skeptical.

So far, Cubic's Indiegogo campaign has raised about a third of its goal in its first day. The entire kit, including the home cube, badge and a pair of smart sockets are available to early backers for as little as US$249. The company says it will retail for $449 when it comes to the mass market in the Fall of 2015. 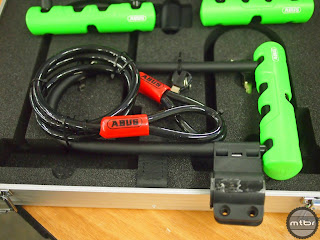 German brand ABUS was on hand and Colin showed us their new Ultra 410 u-type locks with a 12mm round shackle that are available with or without a cable. The Ultra 410 uses a high end key cylinder and the 6 key wafer is designed to not rip your jeans when it’s in your pocket. Shown here are the ABUS Ultra 410 Mini in 7″ ($39.99) and 5.5″ ($34.99) sizes and the Ultra 410 Mini + Cobra Cable combo ($42.99). The Ultra series will be available starting in mid-December. Another brand new ABUS lock that is forth coming is the Futura model that is a little wider and taller than existing ABUS models. The Futura will come in grey or red
http://www.abus.com/es/ 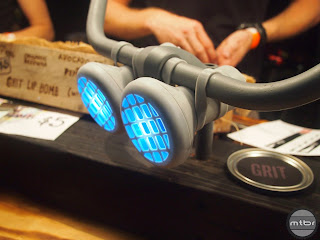 The Grit Night Shift is available as a bike light holder only ($18.00) or it can ordered with a 36 lumen light for $24.00. The light holder also serves as a way to attach the light to your bike. Future versions will have options for a 135 lumen and a 900 lumen light.

For more information or to order direct: http://www.gritsantacruz.com 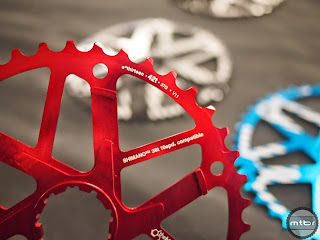 e*thirteen‘s EX cog allows you to add a 42T option to your 1×10 drivetrains. The ano aluminum is 5mm thick, comes in 3 colors (black, red, blue) and works with Shimano or SRAM 10 speed drivetrains. Also shown are the e*thirteen LG1+ pedals and the enduro racing specific TRSr crankset.
http://reviews.mtbr.com/tag/ethirteen
For more information or to order direct:
http://bythehive.com/e-thirteen/ 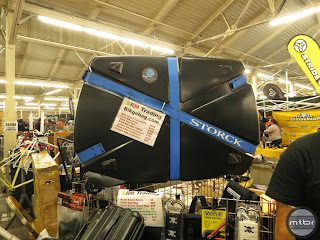 B & W is a brand that I have never heard of. They are from Germany and they make some very nice looking, high-end bike travel cases. Shown here is the top-of-the-line Deluxe Curv Bike Guard Case made from 100% polypropylene – a material that is environmentally friendly, weatherproof and recyclable. B & W also claims that it is “highly impact resistant, abrasion resistant, tough and durable – even at low temperatures.” It is made for road bikes, tri bikes and mountain bikes up to 29″ in wheel size. How much, you ask? This model goes for $950. B & W also has other models in the $450 range. 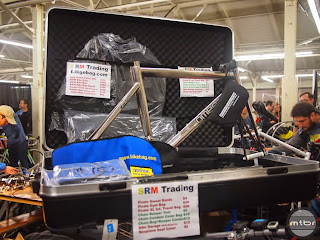 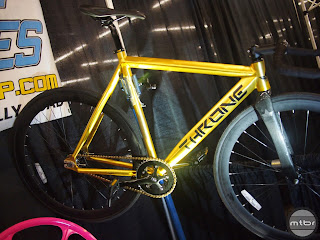