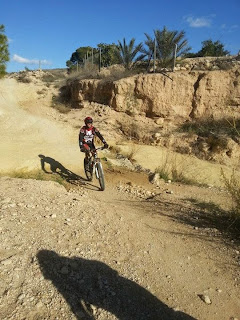 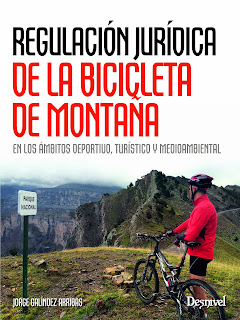 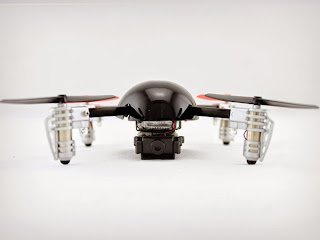 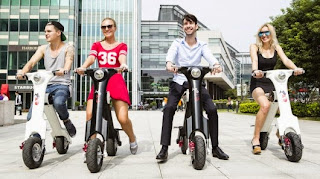 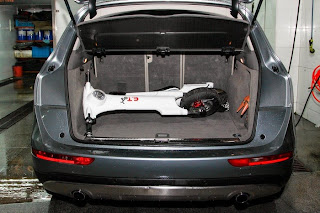 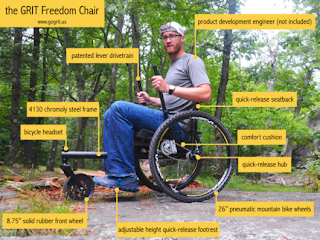 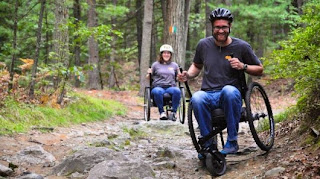 
The Freedom Chair's knobby bike tires and torque-increasing lever drive help it navigate rough terrain
Image Gallery (12 images)
The wheelchair provides invaluable mobility to those with disabilities, but there are countless places where it can't go. Trails, parks, beaches, woods … without a paved road or structured pathway, the wheelchair can quickly find itself out of its element. The GRIT Freedom Chair updates wheelchair design – well not technically wheelchair, but "recreational device" – with all-terrain capabilities. Part mountain bike, part (recreational) wheelchair, the Freedom Chair opens up a new world of exploration.

GRIT has been supplying LFCs to developing countries for several yearsA different kind of mountain bike to hit the trails withThe Freedom Chair makes easy work of uneven pavement and boardwalkGRIT has already reached its Kickstarter goal with about a month and a half leftView all
We've covered some pretty gnarly all-terrain wheelchairs in the past, including the HexHog and UNiMO Adventure. Unlike those two models, the Freedom Chair is unpowered, making it a cross between a wheelchair and an adaptive hand-cycle mountain bike.

The Freedom Chair was born more than half a decade ago in a student project called the Leveraged Freedom Chair. A small group of MIT students identified a clear need for a more rugged form of wheelchair in developing countries, reasoning that wheelchair users in such countries faced a particular challenging road – or lack thereof – in navigating underdeveloped and under-maintained ground. The design was built to be capable enough to navigate rough, unstructured terrain but small and nimble enough to use indoors. It won a variety of awards, including a Wall Street Journal 2010 Technology Innovation Award and a $100,000 Diamond award in the 2012 MassChallenge startup competition.

With that kind of buzz (and money) behind them, the MIT grads founded Global Research Innovation & Technology (GRIT) in 2012 and began distributing the LFC to developing countries around the world. The company explains that it manufactures the chair in India and sells them in bulk for $250 a piece to NGOs and other development organizations, estimating that it's distributed more than 1,000 chairs in nearly a dozen countries.

GRIT has been supplying LFCs to developing countries for several years
Now GRIT is ready to bring the LFC – rebranded simply "Freedom Chair" – back home to the United States. The Massachusetts-based company has been consulting with US wheelchair users for the past two years to identify ways to refine the design for their needs. It has incorporated changes based on the feedback, including a collapsible design that allows the chair to pack easily into a standard car trunk, a must for the car-dependent US market, and standard US-market bicycle parts to make for easy replacement and repair. It also plans to manufacturer the American-spec Freedom Chair in the US.

The updated Freedom Chair maintains the LFC's primary design, converting arm power into motion by a simple lever-based, geared drivetrain, similar to the system on the RoChair. As on a bicycle, the gearing eases the strain on the muscles, allowing the rider to power through rougher terrain and up steeper hills.

The Freedom Chair's levers appear quite simple and intuitive to use. By grabbing the tops of the levers, the rider enjoys a 3:1 gear ratio and develops 50 percent more torque than he or she would with standard push rims, something that's quite valuable when muscling through rough, uneven terrain. Holding the levers near the base, he or she enjoys shorter, quicker strokes that equate to a near-1:1 gear ratio and faster speeds – up to 75 percent faster than standard wheelchairs, according to GRIT. Pulling back on the levers activates braking.

Rock crawling with the GRIT Freedom Chair
The individually geared levers can be operated together when traveling straight or independently when turning and maneuvering. The levers can be removed and stored on the chair when they're not needed, allowing for a more compact, maneuverable configuration.

GRIT's chief technology officer Mario Bollini told us that the company has looked into designing a multi-speed drivetrain but believes that the single-speed lever design is better for its first American product. He explained that the design keeps the price down, makes for simpler, quick-release wheel removal, and offers some of the versatility of a multi-speed drivetrain by way of the different gear ratios available on the opposite ends of the levers. It sounds as though a multi-speed version might be a possibility for the future, but Bollini stopped short of saying so directly.

The Freedom Chair is built on a 4130 chromoly steel frame that measures 48 in (122 cm) from end to end. It has two quick-release 26-in mountain bike wheels wrapped in 1.75-in hybrid tires. The 8.75-in, solid-rubber front wheel improves stability. The chair accommodates riders up to 220 lb (100 kg), and the cushioned seat and adjustable, quick-release footrest keep the rider comfortable.

Freedom Chair features
Because all of the moving parts are standard bicycle components, the Freedom Chair is easy to upgrade. For instance, owners can add a fatter, more rugged mountain bike wheel/tire set-up or change the gearing.

The Freedom Chair doesn't have FDA approval as a medical device, so GRIT is marketing it as a recreational device in the US. Think of it as an upright mountain trike with a supportive chair.

GRIT is offering early bird Freedom Chair pricing on Kickstarter now. The lowest two price points, starting at US$2,195, are sold out, but the $2,695 version is still available as of publishing. There are a number of lower pledge points for those that might want to support the project without buying a chair. The chair's estimated regular MSRP is $2,995. The campaign has already shot past its $50,000 goal, and GRIT is now working on stretch goals, including developing a sand/snow fat tire kit if it reaches $100,000. Chair deliveries will begin in May, if everything goes according to plan.

GRIT offers "try before you buy" opportunities at its Cambridge, Massachusetts headquarters. It also plans to bring demo units to next week's Abilities Expo in San Jose, California and the Ski Spectacular in Breckenridge, Colorado in December.

The Freedom Chair won't be the first product of its kind in the United States. UK-based Mountain Trike and Maine-based Renegade Wheelchairs offer similar lever-drive, all-terrain chairs. However, if GRIT manages to get the Freedom Chair to market at $2,995 as planned, it will be well under half the price of the $7,695 Mountain Trike (as listed on Spokes'n Motion) and comfortably under the $4,995 base price of the All-Terrain Renegade Wheelchair. It will lack some of the features available on one or both of those models (disc brakes, suspension, multi-speed drivetrains, etc.).