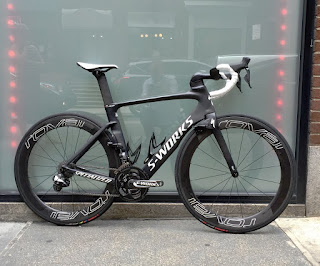 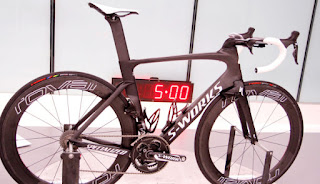 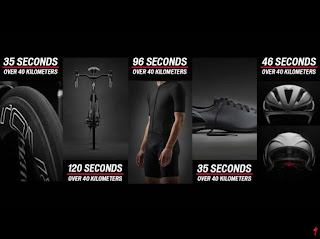 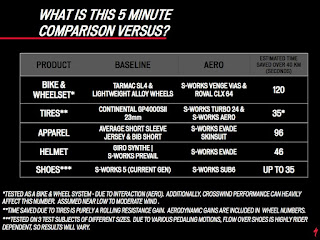 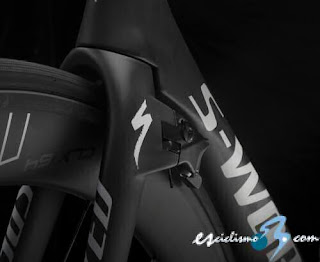 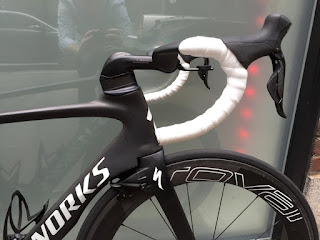 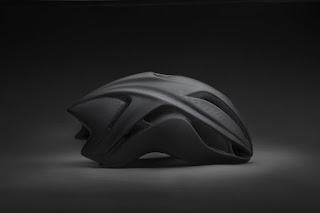 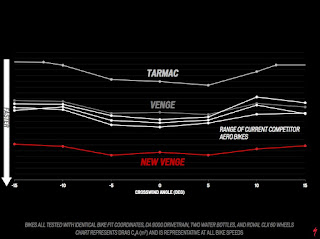 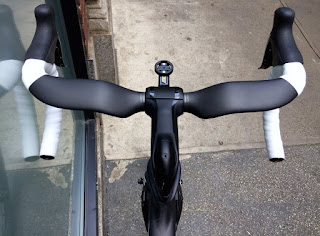 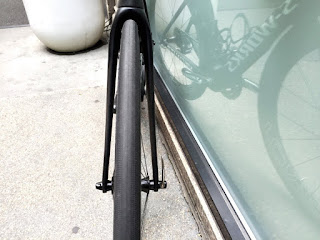 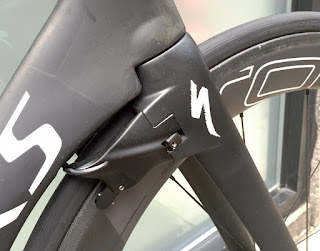 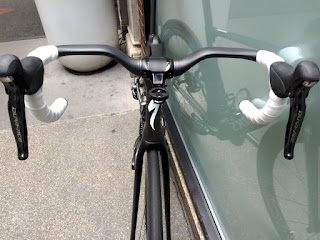 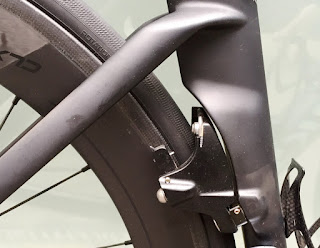 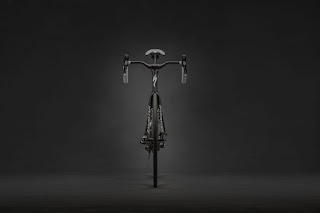 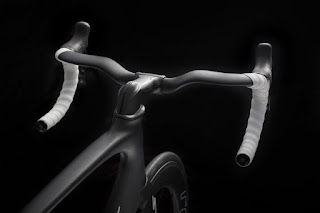 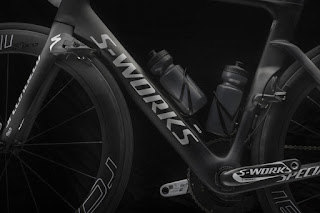 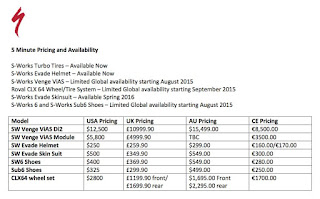 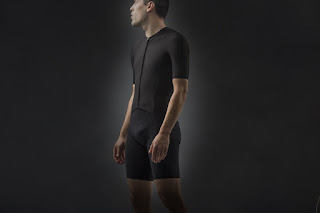 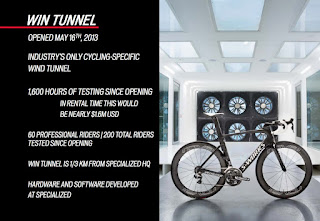 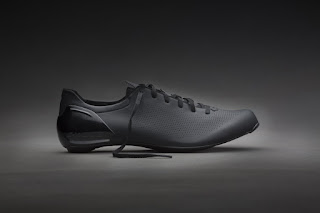 See more photos below, along with further details.

Although we didn't get to ride the bike — not yet anyway — it does look impressive. The first thing we noticed was the headset, stem, and handlebar; it looks like a super-stiff setup. Then the new proprietary brakes; they're integrated, behind the fork and seat tube. Third, there are no cables showing — they're all internally routed. The company says this bike, ridden with a Roval CLX64 wheelset, will save 120 seconds over 40km. Overall, as a first impression, it might be the best-looking aero road bike we've ever seen. Hopefully we'll get to test-ride one soon.

Here's what Specialized's Chris Riekert said in a statement sent to Business Insider:

The all-new S-Works Venge ViAS Di2 was developed with one objective in mind—to be the fastest bike in the world. The design for this bike started with building our own Wind Tunnel, and with more than 1000 hours of testing, prototyping, and refining, we can say with confidence that we nailed our objective. The high level of performance starts with a Rider-First Engineered frame and fork that feature a new level of aerodynamics. This is coupled with the added benefit of the Roval CLX 64 wheelset—the fastest wheels we've ever made. Along with the zero-drag brakes and Aerofly ViAS cockpit, the S-Works Venge ViAS Di2 is, quite simply, the fastest bike in the world.

Up front things look stiff and fast with the new stem and headset and the new proprietary "zero-drag brake" tucked in behind the fork and out of the wind.
And here's what Specialized says about the new wheelset:

Roval CLX 64 wheelset provides the ultimate in speed and performance. Optimized for both head- and crosswinds, the CLX 64 wheelset is tubeless-ready and features a 21mm internal rim width for enhanced traction, minimal rolling resistance, and improved aerodynamics.

A view of the cockpit and the Aerofly ViAS handlebar from the rider's point of view.

With the brake tucked behind the fork, things suddenly look a lot more aero up front.

As for that tire, it's the S-Works Turbo. The company claims it's "the world's fastest tire" and saves 35 seconds over 40km.

A closer look at the front "zero-drag brake" and full monocoque carbon fork.

FACT carbon fork is designed to drastically reduce aerodynamic drag, while still providing incredible stiffness and steering response for all out efforts and twisting descents.

A view of the front and the S-Works Aerofly ViAS handlebar.

Here's another view from the side closer up.


The rear "zero-drag brake" is tucked in pretty tight.


Here's how the new Venge compares with Specialized's previous bikes.

This is S-Works Sub6 shoe, which Specialized says is the most aerodynamically advanced and lightest it's ever produced.
And this is the new helmet, the S-Works Evade.


Specialized says it saves 46 seconds over 40km compared to a standard road helmet.

And the S-Works Evade GC skinsuit, which is said to save 96 seconds over 40km.


Seen from the front the new Venge looks seriously aero.


Another look up front: Everything looks clean and neat with all cables internally routed.


A view from the other side of the bike.


Some details about the "Win Tunnel" that Specialized says it used to design the new Venge.


What Specialized means when it says the new Venge and aero gear will save five minutes over 40 kilometers:


Here's how much the new Specialized S-Works Venge ViAS and everything else in this aero "ecosystem" will cost you.


We'll ask the folks at Specialized if they'll let us test and review this bike so that we can see just how fast it really is. And how it rides. So stay tuned.

DANIEL MCMAHON
The world's hottest new road bike: the S-Works Venge ViAS from Specialized. The super-stiff, lightweight aero machine will officially debut at this year's Tour de France (July 4-26), where it will be ridden by select riders such as Mark Cavendish and Peter Sagan.

This year's Tour de France, as with most Tours, will see the rolling out of new bikes, wheels, tires, helmets, sunglasses, shoes, apparel, and more. Because it's the world's largest annual sporting event, it's an ideal time for manufactures to show off all their new stuff.

One bike that seems to be getting more attention than all the others is the just-revealed Specialized S-Works Venge ViAS. The company recently invited Business Insider to check it out in person, but because it was under embargo until now we didn't get to take it for a spin. Yet during our brief meet-up with a Specialized rep we got to snap a few pics and learn a bit about it. Specialized claims it is "the fastest bike in the world," which is a bold statement considering how many fast bikes are out there.

The carbon Venge is actually one of five new products Specialized is unveiling this week as a "complete aerodynamic ecosystem." Along with the Venge, there's a new skinsuit, helmet, shoes, and wheel-and-tire system. All together, the project is dubbed "5 Minutes," which is how much time you'll save over 40 kilometers, or about 25 miles, if you're riding this bike and wearing the gear, the company says. That is, compared to its previous similar bike and gear.

There will be limited availability beginning in August, the company said. The price for the Venge: $12,500. 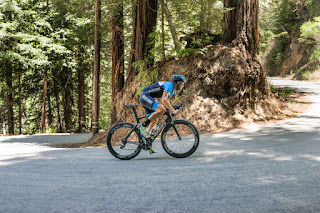 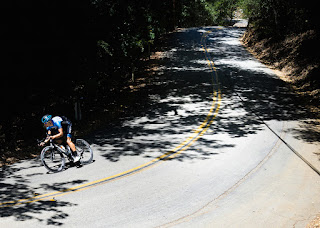 The invite was short and somewhat cryptic, but everyone still had a pretty strong hunch what it was all about. Specialized was going to be showing-off their new Venge aero road bike. After all, it had been four years since the bike made the splashiest of splashy intros, when it was first unveiled in 2011 at the McLaren F1 wind tunnel where it was co-developed, and then the following day ridden to a huge victory on the road when (then) team HTC rider Matt Goss rode his in to win Milano-Sanremo.

We were told that the bike first began to take shape over two years ago when a prototype using the new front triangle mated an old rear triangle was tested in the A2 wind tunnel. In between wind stints, the frame was hack-sawed in half and bondo’d back together as Specialized’s designers charted the bike’s flow visualization in seeking to create its initial “design language.”


ABOUT THE BIKE
If there was one take-way from going over the specs and science behind the new Venge, it’s that in pursuit of maximizing speed and aero efficiencies, things are going to start getting complicated. Just as we have already found with the aero road bikes from Look that rely on a high (and delicate) level of system integration, the Venge too has entered the realm of truly specialized equipment. Collectively, the bike industry is pedaling further down a path where swapping bikes between different riders is not just a matter of raising or lowering the saddle. Ease of set-up is no longer a consideration when we’re talking about bikes has highly evolved as the Venge.

As repeatable a mantra that “fit is paramount” is for all riders, on all bikes, it is doubly paramount here. The Venge uses what’s called the “Aerofly ViAS cockpit” which is based on a unique negative 17 degree stem and 25mm rise Aerofly handlebar combo. To zero in on fit, the stem will be available in seven sizes with a selection of six handlebars and four seatposts. Additionally, we were told that anyone interested in buying a Venge will first have to navigate an impressive “Venge Finder” web site specifically designed as a sizing tool to fit you (or at least get you close) to the bike before you visit your dealer.

As for visiting your local dealer, Specialized says the new S-Works Venge should be available at your local dealer in the late summer for close to $12,000 with a Pro model due further down the road.

No doubt the unique, integrated brakes are the bikes most standout features. As Chris D’Alusio explained, “We weren’t moving the needle with either the stock fork or an aero version (with standard brake mounting). With the new design there was a big improvement in the aero numbers, but unless it worked as good, if not better, than what we already had, it was a no-go.” Apparently, the fork also plays a big role in maximizing the bikes steering response.

We expected the Venge to feel fast on the flats, but we were in for a pleasant surprise on most of the climbs as well. Photo: Chris Riekert

OUTSIDE OF THE WIND TUNNEL

We headed to Morgan Hill, California, home of Specialized headquarters, for an exclusive first ride on the new Venge, which included 87 miles in the saddle with over 10,000 feet of climbing. Here are our first impressions.

We’ll be the first to admit that aero-road bikes usually aren’t our favorite bikes to ride because compared to most round tube road bikes, they’re heavier, don’t have the same torsional stiffness, and have a harsher ride. Ultimately, they’re just not as much fun to ride over a wide range of terrain. As for the new Venge, it’s definitely no featherweight at 17 pounds (including Quarq power meter), but as we found out just minutes into the ride, overall torsional and pedaling stiffness is at a different level than anything else we’ve ridden, and not just aero-road bikes—all road bikes!

Concerning ride comfort, the Venge also does well in this department, though it isn’t from anything Specialized has done with tube profiles or elastomer inserts. We’re chalking up the ride quality to the 21mm internal width Roval rims and 24mm wide tires. At 90 psi, the wheel and tire combo did wonders for minimizing what we felt coming from the road.

One initial cause for concern we had was with the brakes and how much would be sacrificed in the name of saving a few grams of drag. Their placement and design is completely unique and are oriented around optimizing airflow, especially the rear brake. At the lever, the brakes have a slightly heavier feel than a SRAM Red or Dura-Ace rim brake, more than likely from the intricate routing that keeps the cables hidden away and out of sight. Functionally though, the brakes had plenty of stopping power, and at least for the one ride, didn’t have any notable downsides.

The 90-mile ride included 8,000 feet of climbing, mostly coming from climbs up to a mile in length, save for a seven-mile, 6% climb. In what was surprising was the fact that this type of terrain ended up being tailor-made for the Venge. Because of the bike’s efficiency coming from aerodynamics and stiffness, it was rocket fast on undulations where you can pin it down a descent and carry the momentum mid-way up the next hill before jumping out of the saddle and holding speed over the top, before doing it all over again.

Even though the Venge would not be our ultimate bike for riding alpine passes, it was much more efficient across most every terrain than we had expected before the ride, and not only in terms of speed, but also in ride quality. We’re really looking forward to riding the new Venue more, and we’re eager to get it on our home roads for a long-term test. Look for that soon in an upcoming issue of Road Bike Action magazine!