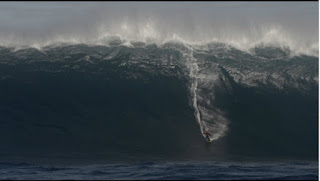 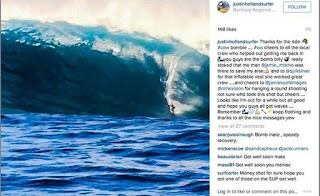 
Last week, we sat wide-eyed at our desks and nearly shot coffee through of our noses after seeing the purple blob en route to West Australia. The swell—which was predicted to produce “seas of 50 feet, with one pass indicating seas of just a hair under 60 feet,” according to Surfline forecaster, Kevin Wallis—made landfall, with the epicenter of hype smack-dab in the middle Cow Bombie, Western Australia.

Jamie Mitchell and Justin “Frotha” Holland, who have never been ones to travel in the opposite direction of any major swell, got their big-wave boards out and got right amongst the action. Our friends over at MySurf.tv were also amongst the action. Here’s what they had to say to supplement this bitchin’ clip:

There were a few lulls and smaller ones but Frotha pulled the trigger on an absolute monster and copped a pounding, snapping his femur before taking a second bomb on the head. Some are calling it one of the biggest waves ever ridden in Australia. Maybe, maybe not… either way Frotha has been put back together and is on the mend.

Wearing a busted left leg like a badge of honour, big-wave rider Justin Holland vowed yesterday to return unbroken to the surf that monstered him on Saturday morning.

Still groggy from nearly four hours of surgery to insert two titanium rods into his snapped femur, Mr Holland gave a thrilling account of his ordeal at the notorious Cow Bombie break off Gracetown on one of the biggest waves ridden in Australia.He was fortunate to have survived a severed artery and his expensive board was lost to the ocean.

“I felt like I got hit by Australia,” the 38-year-old said, admitting he had got “a bit cocky” after negotiating eight previous waves.“When that thing hit me, it was literally like a bomb going off. We have a saying that, ‘If you wanna play, you have to pay’. I’ve just paid. It’s a pretty heavy price to pay but it’s rewarding.”
The Gold Coast father of two said he had come to WA last Wednesday for the “swell of the decade” and had been concerned it was not going to be big enough.

Mr Holland said he feared sharks more than he did big waves and — as the only surfer who braved the monster swell — described himself as a floating “prawn cocktail” before he was towed by a jetski into the biggest ride of his life.

“I glanced to the side and saw it was a pretty big one — it was a monster,” he said of the 18m wave.“You’ve got to remember, these waves are coming from South Africa and haven’t hit anything until they hit that reef.“But it was so smooth … it was so big that it had cleaned itself up, there wasn’t a drop out of place. It was so fast and fun but in the back of my mind I was thinking, ‘Where is this thing?’

“Looking up, it was higher than the sky. Then it just absolutely exploded right on me. The lip just went bang, straight down and I’ve got to admit, it just outran me.”Mr Holland heard his leg break and feared he might drown while screaming in pain under what he estimated was 15m of white water.
With his leg being “rag-dolled”, he was hammered by the second wave of the set before being hauled to safety.Mr Holland recalled biting down hard on his wetsuit and a strap on the rescue sled as a mechanism to deal with the growing pain.He believed he was saved by an inflatable vest recently produced by global surf brand Quiksilver.

In a premonition of the mayhem to come, Mr Holland had added a wetsuit with extra padding to his gear and had taken painkillers to help dull the effects of a rib injury he got when he chest-planted into the hard surf a day earlier.Yesterday, he spoke of his deep respect for the ocean. The carpenter said he was fortunate to have had renowned big-waver and rescue genius Jamie Mitchell, a close friend from surf club nippers since age five, on the nearby jetski.

Mr Holland described his injury as “gnarly” and was overwhelmed in his Bunbury hospital bed when shown a picture of him carving down the face of the monster. Minutes later, he was signing posters for nurses.He said losing his mother to cancer six years ago and watching his father deal with a stroke last year had prompted him to live life with gusto.

Doctors have told Mr Holland he may not be able to walk unassisted for up to 10 weeks. He has vowed to continue his quest to become this year’s world stand-up paddleboard champion.