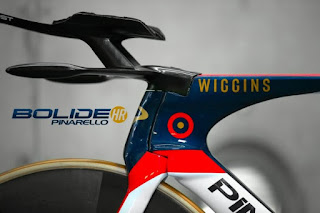 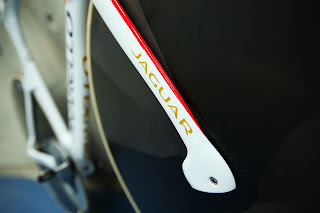 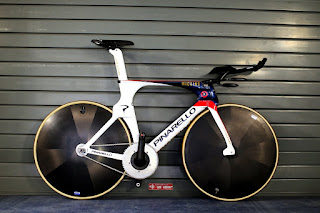 Bradley Wiggins’s Pinarello Bolide HR revealed Henry RobertshawJune 5, 2015 Details confirmed of the bike Wiggins will use to tackle the Hour Record this Sunday. After weeks of speculation, proper details have finally emerged of the bike Bradley Wiggins will use to tackle the Hour Record at the Lee Valley velodrome this Sunday. The Pinarello Bolide HR has been developed in conjunction with Jaguar and has been has been hailed by Wiggins as “the most aerodynamically efficient track bike I’ve ever ridden.” The bike, a modified track version of the Pinarello Bolide that Wiggins rode during his time at Team Sky, has been desgined using Jaguar’s CFD [Computational Fluid Dynamics] technology, and is claimed to be 7.5% more aerodynamically efficient compared to the road version of the Bolide. The fork has been redesigned to make it sit closer to the surface of the wheel Aside from narrowing the rear triangle to accommodate a 120mm track axle, the main alteration for the Pinarello Bolide HR has been the redesign of the fork which has been narrowed to bring it closer to the surface of the front wheel. The chainrings and hubs have also been optimised for aerodynamics as Wiggins looks to smash Dowsett’s record with a target of 55.250km. As we revealed earlier this week, Wiggins will also be using custom 3D printed titanium handlebars. These have been produced specifically for the record attempt, and will have been designed to keep Wiggins’s shoulders as narrow as possible while still keeping him in position that is comfortable enough to maintain for the full hour. 3D printed handlebars on the Pinarello Bolide HR will help to narrow Wiggins’s front-end surface area For his pedals and cleats, Wiggins will be sticking with the long term partnership that he has had with Speedplay, using the company’s Zero Aero walkable cleat that he rode in his attempt at the British 10-mile time trial record last month, combined with Zero pedals. >>> Sir Bradley Wiggins’s 10 mile time trial bike It might seem odd to challenge for one of the most iconic records in cycling in a pair of cleats that are essentially designed to make it easier to walk in and out of cafes, but they also feature a dimpled surfacesimilar to a gold ball which should, in theory, create a turbulant layer of air that will stay close to the surface of the pedal and cleat for longer, therefore reducing drag. Aero chainrings and non-aero Speedplay pedals for the Hour Record attempt Finally the Pinarello Bolide HR will have a custom patriotic red, white, and blue paintjob that will stand out a bit more than the black (and reportedly heavier) bike that Wiggins has been using in training. This also features Wiggins’s trademark target roundels to match the Rapha Team Wiggins skinsuit that he will be wearing for the attempt. http://www.cyclingweekly.co.uk/news/latest-news/bradley-wigginss-pinarello-bolide-hr-revealed-175375