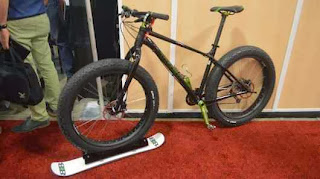 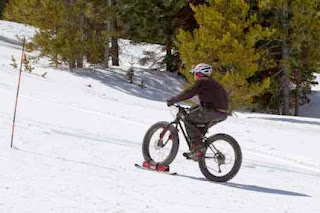 
Bikes designed for snow, ice and weather have really become all the rage over the past few years. A new Colorado-based outfit thinks it has a solution for snow biking that's considerably better than fat tires. The BikeBoard puts a ski underneath the front tire, providing float in deep snow and metal-edged traction on hardpack. Bikes have officially gone skiin'.

BIkeBoards adjust to various tire sizesBuilt like a regular ski, BikeBoards have a steel edge and sidecutBikeBoards says its ski offers better float than even the fattest bikes out thereThe BikeBoards attach to the front tire via a pin systemView all
When we took a look at Maria Leijerstam's Antarctic fat trike, several readers suggested that a ski system might be more effective up front. In fact, according to reports we read later, Leijerstam did carry front skis for negotiating deep snow. And she achieved her goal of becoming the first person to bike to the South Pole.

BikeBoards agrees that a front ski makes more sense than a tire for biking in snow. Its front bike ski is designed to convert a bike into a more capable snow tourer. In place of a sinking, sputtering front tire, the rider enjoys the float and glide of a short ski.

"[In deep snow] even a five-inch tire is bogging down," BikeBoard's Brian Hannon tells us. "This [BikeBoard] is gliding up and over the top – you're spending less energy, you're going faster. We've got video of going through 16 in (41 cm) of snow."

The BikeBoard uses a simple pin and strap system to adjust to and secure around the front tire. It is designed to fit tires with widths between 2 and 5 in (5 to 13 cm). The ski can be mounted in three positions based on snow and riding conditions – mounting it farther back will keep the tip out of the snow and deliver better float. Like a ski, it has a full steel edge, a bit of sidecut and curved tips, providing float in deep snow and grip and carving on harder, slicker snow and ice.

Keeping the rear tire free allows riders to bike on flats and climbs
Unlike other full-blown ski bikes that entail removing the wheels entirely to replace them with skis, the BikeBoard offers the advantage of maintaining the bike's fully geared drivetrain, allowing the rider to bike on flat and uphill terrain, as well as downhill. Also, since the front wheel stays on, the BikeBoard can be removed on the go should the snow give way to dry ground. It can then be strapped to a backpack or thrown on a bike rack until it's needed again.

We assume that the BikeBoard will work smoothest with a fat tire in back, but the company also says that the board can be used on other bike styles, including BMX and regular 26- and 29-in mountain bikes. If you need more traction than a bike tire can provide, we could see rigging a KTRAK in back and BikeBoard up front.

Another interesting possibility Hannon mentions is using a BikeBoard with a motorized dirt bike, as a sort of snowmobile bike. He says Pedego is offering a BikeBoard-powered "electric snowmobile" version of its Trail Tracker fat bike in Europe. You can see that e-bike in action in the first video at the bottom of the page.

A variety of bikes means a variety of riding styles. BikeBoards envisions using the boards for everything from flat commutes in deep snow to adrenaline-spiking downhill riding.

Hannon compares snowy downhilling on a regular bike with a BikeBoard-equipped bike: "Imagine yourself going downhill, two wheels are sliding sideways, you got a leg out, you're trying to tripod it. With this, you put your weight up a little bit forward, now you've got weight on a metal edge and you're carving downhill."

BikeBoards haven't earned their South Pole chops just yet, but the company has discussed its idea with Eric Larsen, who abandoned a South Pole bike attempt last year after being slowed to a crawl by deep snow. We reached out to Larsen to pick his brain, and he tells us he likes the idea on paper but would have to put the boards to the test to really say whether or not they're an improvement over the regular fat bike he used.

BikeBoards debuted at this week's Outdoor Retailer Winter Market show. They're available for order now, starting at US$375 for a complete kit.

The second video below shows some general BikeBoard action, including both front- and dual-tire configurations. 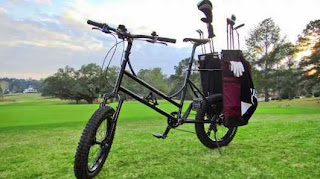 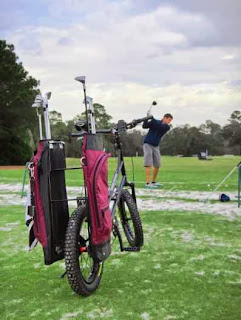 The Golf Bike should be available for purchase as of this summer (Northern Hemisphere). The base model will be priced at US$1,200, with a "Made in USA" version going for $1,800. 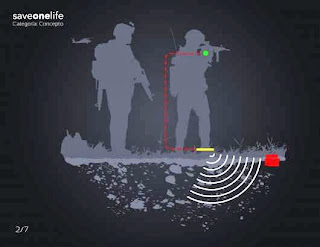 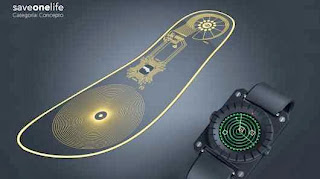 MILITARY
Lemur Studio Design develops mine detector in a shoe

Boot insoles can turn a pair of really uncomfortable brogues into podiatric clouds that can take a long hike and remove the foot ache. Now, Lemur Studio Design based in Bogota, Colombia, has come up with a concept for insoles that won’t just save your instep, but could save your life. A submission to the World Design Impact Prize 2013-2014 competition, SaveOneLife is a wearable mine detector that fits in a shoe and warns the wearer if and where a potentially deadly landmine might lurk nearby.

SaveOneLife is currently at the conceptual stageSaveOneLife operates at a distance of two meters (6.5 ft)SaveOneLife aims at dealing with the problem of anti-personnel minesSaveOneLife's electronicsView all
Colombia has a major landmine problem. According to the International Campaign to ban Landmines (ICBL), the country is the second most mined in the world after Afghanistan, with over 10,000 casualties since 1990, including about 2,000 killed. Anti-government rebel groups have strewn antipersonnel and antivehicle mines along roads and foot trails, near government bases, in rural areas, around schools, houses, national parks, and indigenous communities’ land. The problem is made worse by drug gangs using mines to protect their coca farms from intruders.

This widespread, often indiscriminate mining combined with the mountainous jungle terrain of the region make detecting and clearing landmines extremely difficult. The notoriously dangerous job requires money, special equipment, and expert crews. It’s a long, slow task that even under the best conditions can take decades to complete. Meanwhile, soldiers, coca eradication teams, farmers, and people in general are at daily risk of being maimed or killed.

SaveOneLife operates at a distance of two meters (6.5 ft)
According to the designers, SaveOneLife isn’t a solution to the problem, but more of a stopgap technology to reduce the danger from antipersonnel mines. It works on the principle of a metal detector. The insole is made of a conductive material and has a planar coil printed on it. This produces an electromagnetic field. When the wearer walks within two meters (6.5 ft) of a mine containing metal parts, this disrupts the field and is detected by a microprocessor, which is also printed on the insole, as is a radio transmitter. The transmitter sends a signal to a wristwatch-like readout that sounds an alarm and displays the location of the mine on a small screen.

SaveOneLife was designed by Iván Pérez under project leader Lorena Cárdenas. It’s currently at a conceptual stage due to economic reasons, but is designed to be as realistic as possible with the aim of providing a template for eventually coming up with a practical, life-saving device based on nanotechnology.