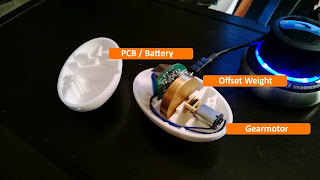 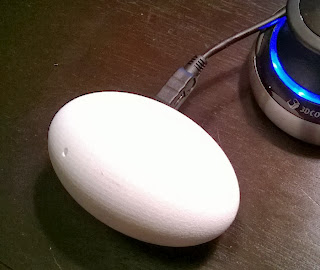 Egg - the intelligent cat companion by Jason O'Mara
We are cat entertainment enthusiasts. So are you.
Pet stores offer you cheap and rather uninteresting balls, things-on-strings, and noise makers that entertain for a few minutes, and then end up under your couch, ne'er to be seen again. We've bought many of these toys ourselves, and -- just like you -- face the disappointment on our cats' faces. We're ready to rock their socks off and move into the next generation of cat entertainment.
Egg is not another cat toy, it's a cat companion.
Egg responds to your cat's play by mimicking a small animal's erratic movement and sound
Egg is rechargeable through your USB phone charging cord -- never buy batteries again!
Configure Egg to operate in different modes on your laptop's interface

Egg is designed to be your cat's favorite toy and so it can do a lot of things.
Move back and forth even over carpet
Shake and make cute sounds
Sense obstacles and reverse direction
and most importantly, Egg will sense kitty interactions ( taps, kitty-grabs, and pounces) and try to escape while making lots of noise!
How does Egg do this? Well it's pretty simple.
Inside of Egg, a Gearmotor turns an offset weight which displaces Egg's center of gravity and the entire toy rolls forward or backward. An on-board angular sensor located on the Printed Circuit Board (PCB), adjusts to different floor types, human and kitty obstacles. 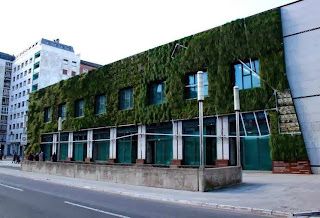 A vertical garden covering 1492m2 has been created in Vitoria-Gasteiz, Spain. The garden, which adorns the the Palacio de Congresos Europa (Palace of Congresses Europe) and incorporates over 33,000 individual plants, was designed by Alicante-based sustainable architecture firm Urbanarbolismo.

In order to reflect the native ecosystems of the locality, the plants used are inspired by those found in the areas surrounding Vitoria-Gasteiz, including the wetland vegetation of Salburua, the agricultural field plots of Alava, and beech forests of the Vitoria mountains.

About two thirds of the planted area uses a hydroponic system, which is monitored to control the development of the plants. Factors tracked include substrate nutrient conditions, pH levels and humidity. The monitoring also helps to save water and energy.

A view of the interplay between the building's frame and its windows
"We were surprised how quickly nature breaks through the vertical garden, thanks to native plants it has been colonized by all kinds of insects and animals," says Urbanarbolismo.

As well as plants that are "bedded into" the building, a twisting metal frame is wrapped around it to provide a means of support for climbing plants. The structure is illuminated at night by low-power LEDs, creating an intriguing aesthetic.