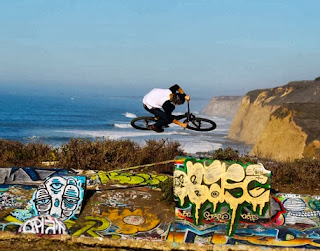 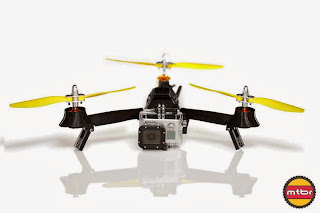 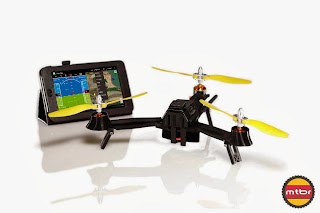 Pint-Sized Pocket Drone Captures Your MTB Radness with GPS-Tracking Video Copter
‏It’s following you. And it’s watching. But no need to be alarmed–it’s not the NSA…at least not yet. No, what could soon be following you down the trail is a diminutive new video heli called the Pocket Drone. And while relatively affordable RC video copters have been available for some time, Pocket Drone’s autopilot mode that follows your GPS-enabled smartphone, and it’s diminutive size might make it the best thing to happen to mountain bike footage since the GoPro.

‏Launched today via crowd-funding site Kickstarter, San Diego-based AirDroids have a production ready prototype and at publication time were well on their way to funding the initial run of drones. And while some promising Kickstarter ventures end up as vaporware, AirDroid has verified video that the Pocket Drone actually exists–we know one of the riders in the promo video.
‏AirDroid’s founders –Chance Roth and Timothy Reuter–met through a drone enthusiast group, then decided to create a drone of their own, taking the best qualities they’d seen and adding new features, functionality and accessibility to the mix.

‏“We saw a lot of kits that were powerful and flexible, but took a long time to put together and tune. There were also good off-the-shelf products but they were limited in their functionality,” said Reuter. “Pocket Drone is the world’s first heavy-lift microcopter–as powerful as an open-source kit, but portable and easy to use by anyone.”
The Pocket Drone has a flight time of about 20 minutes, is easy to fly and quick to deploy, according to the founders–all attributes that should make it appealing to home MTB video makers and pros alike. In addition to the GPS follow feature, it can also be programmed to follow a set of GPS waypoints, making for some interesting filming options.

‏While they don’t have an estimate on delivery, early adopters can get in on the action sooner by pledging the $495 asking price on AirDroid’s Kickstarter Page. The creators are at the Consumer Electronics Show in Las Vegas this week looking to find retail distribution. 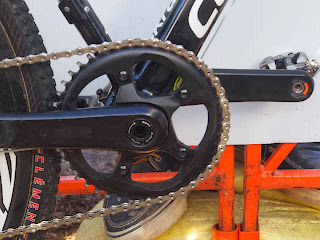 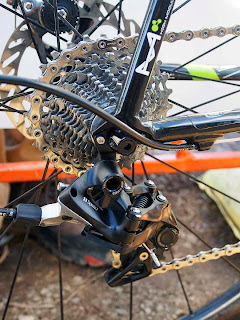 The not-so-secret SRAM CX1 drivetrain made another sneak-peek appearance this past weekend on the Cannondale SuperX disc cyclocross bike of Ryan Trebon, second place finisher in the men’s elite race. The SRAM PR team was keeping mum on details, but by the looks of Trebon’s set-up, this 1×11 set-up is getting very close to being production ready.

For the uninitiated, CX1 looks to be the mud-bog jumping cousin of SRAM’s wildly-popular XX1 mountain bike drivetrain, which is designed specifically for single-chainring use without the need for guides, catchers or other safety measures. Instead extra tall chainring teeth alternating between wide and thin, or what the Chicago-based company calls its X-Sync technology, keep the chain from jumping off. This will also make it a better choice muddy races, because you’re striping away those potential mud catchers and the need for a front derailleur.

The new derailleur looks a lot like the one used with SRAM’s popular XX1 mountain bike group.

Meanwhile, the rear derailleur looks to closely mimic XX1, where straight parallelogram geometry is combined with an offset and larger jockey pulleys. This will mean that CX1 can only be used in a 1x format; no switching back and forth between single and double chainrings. A built–in roller clutch mechanism will help keep the chain tight even on the bumpy of courses, such as the Valmont Bike Park track that played hosted to this year’s national championships in Boulder, Colorado.

The chainring itself mounts outboard on what looked like a regular Red 22 crankset that had been covered up with black spray paint. Prior to Sunday’s race, there was talk of as many as 4-5 top racers (including new men’s national champion Jeremy Powers) using the prototype set-up. But come startline time, only Trebon and Elle Anderson (second in the women’s elite race) actually showed up with CX1 installed.

Both riders were running a 44-tooth chain ring paired with a standard 11-28 cassette. No word yet on what other chainring sizes will be available, but if the mountain bike system is any indication, expect there to be some more mortal-friendly options.

If you are currently running Red 22 and want to make the switch to the presumably lighter system for next year’s cyclocross season, expect the investment to include new chainring, new chain, and of course the revamped rear derailleur. Official launch for CX1 (or whatever the new system is called) is slated for February 1, with product availability set for June 1. Look for more details on RoadBikeReview.com as soon as they become available.