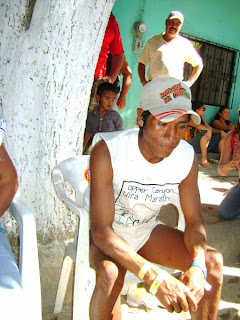 Oregon Man named Joe Grant-
-El Tortuga Lluvia--Rain Turtle. The 24 year old turtle does not run, nor looks
much like his animal helper. In Fact, the Turtle broke Scott Jurek's-
-El Venado, the Stag Deer, course record of 6:32, lowering the
record to 6:24!


Last weekend, I had the honor of running with the world's greatest endurance athletes: the Raramuri, an indigenous tribe living in the deepest canyons on the continent. The Raramuri (also known as the Tarahumara) scratch a living out of rocky, steep soil in the Copper Canyons of the Sierra Madre Mountains in northwestern Mexico.

They are subsistence farmers who grow corn and beans and who live in caves or tiny huts scattered throughout four monstrous chasms—each deeper than the Grand Canyon. The Raramuri make their own clothes—including their sandals, which are just used tire tread wrapped to their feet with leather straps. Through deep snow and blistering heat, rocky canyon trails and thorny sagebrush, the Rarmauri travel virtually barefoot, the soles of their feet thick with calluses.

The Raramuri are great runners because running is part of their everyday life. They don't run for glory or competition—although they have entered a few races and defeated some of the world's greatest athletes. They run to get somewhere—to visit family, to sell produce in town, to gather food, or even to hunt deer.

With only primitive weapons, the Raramuri have hunted deer by literally running them to exhaustion. A few gringos have lured Raramuri to top endurance races, including the Leadville 100 Miler back in 1993 and 1994. Raramuri runners won the event both years and set a course record—wearing their hand-made tire tread sandals.

But the Raramuri shy away from the glitz of American competitions. They prefer to run in their canyon homelands, often in traditional running ceremonies that involve hundreds of miles and last for days. Once a year, though, the Raramuri wander down from their caves and cliffside huts to run the Copper Canyon Ultramarathon, a 47-Mile footrace that has attracted not only the top Raramuri runners, but also the best athletes from around the world.

Ultra legend and seven-time Western States 100 Mile champ Scott Jurek ran the Copper Canyon Ultra in 2006--and lost to Arnulfo Quimare, a 27-year-old goat herder wearing hand-made sandals. I ventured down to the Copper Canyons last week to join 225 other Raramuri runners and a dozen international running celebrities, including Hiroki Ishikura, Japan's top trail runner. The day before the race, I tried on a pair of Raramuri sandals: I could barely make it 100 yards before my feet were screaming—the leather straps blistered the skin between my toes, and jagged rocks seemed to pierce the thin tire tread with every stride. After stepping inside in their shoes, my admiration for the Raramuri's toughness was further magnified.

Sharing the trail with the Raramuri was the most powerful running experience of my life. I learned a lot from observing their graceful stride and smooth running form, but I gained even more from seeing the pure joy on their normally stoic faces. The Raramuri understand something about running that has taken me a lifetime to learn: running is not a chore one endures to lose weight or look good; it is instead a joyful expression of the human spirit.

For the Raramuri, running is a spiritual act that deepens their connection to the divine. Once again in 2009, Arnulfo was the first Raramuri to finish, covering the steep, rugged course with four river crossings in around seven hours. He wore a loincloth and worn-out sandals for 47 miles and ate only cornmeal mixed with water.


Just a few days before the race, Arnulfo had trekked 40 miles across two canyons to get to the race (not exactly a taper), and the day after the ultra, he walked 40 miles back home to tend to his goats. The Raramuri run ultramarathons every day, and they do it with a pure spirit and a joyful heart—even as more logging roads rip apart their ancestral canyons and druglords murder their leaders.

They are the ultimate endurance athletes. To learn more about the Raramuri, watch this 10-minute video I produced: Running for Their Lives.

The Raramuri—also called Tarahumara by outsiders—are some of the last people in North America who continue to live a traditional, subsistence way of life. Corn is their primary crop, used to make everything from tortillas to tesquinada—a home brew for their festivals.

Logging bosses have altered maps and boundaries—going so far as to move two mountains on a fradulent official map—in order to obtain logging permits to clearcut the forests of Choreachi. The Mexican environmental agency—SEMARNAT—rubber-stamped the permits in 2006.

The Raramuri decided to fight for their ancestral lands. With the help of the Sierra Madre Alliance, a nonprofit focused on defending Raramuri lands and rights, the Raramuri filed a lawsuit last year, which temporarily suspended the logging at Choreachi. They currently await trial, where they will have to contend with decades of fraudulent documents and decisions that have prevented legal recognition of Raramuri land rights.

Having run away from conflict for centuries, the Raramuri now must face it head-on. To defend their lands, they must confront corrupt government officials, corporate logging operations, and murderous druglords. The odds are stacked against them.

Yet one thing is clear: the Raramuri know how to endure. Their quiet determination may enable them to overcome the enormous odds. And their tight-knit sense of community may empower them to unite and become politically active. With over 60,000 people, they are the second-largest indigenous group in Mexico.

Most importantly, they are deeply, intensely connected to their lands. That connection could be their source of strength—both personally and politically—in the years ahead. The canyons, rivers, and forests are not just sources of food and nourishment. They are sacred places where their people have thrived for centuries. The Raramuri’s connection to the land is as deep as the canyons themselves.
video
http://current.com/items/88898996_running-for-their-lives.htm