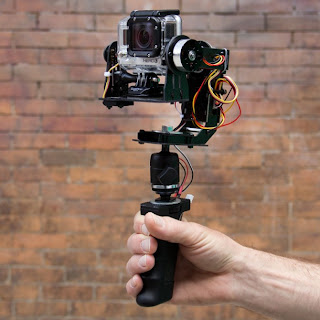 STABiLGO keeps your GoPro on an even keel


Looking for smoother hand-held video, but wanting something a little more high-tech than the SteadiCam Smoothee? Well, you might be interested in the STABiLGO. Designed for use with the GoPro HERO2 or HERO3, the gimbal-mounted stabilizing rig utilizes a gyroscopic sensor, a 32-bit high-speed microcontroller, and two electric motors to keep the camera horizontally and vertically level at all times.

Developed by New York City-based film-makers Michael Boczon and Christine Reilly, the carbon fiber-bodied STABiLGO weighs 23.5 oz (670 g) with the GoPro attached, and allows for 180 degrees of pitch movement and 270 degrees of roll. Users can hold it by its pistol grip-like ABS handle, or attach it to the end of a monopod (or folded-up tripod) to achieve simulated crane shots.


When first mounting their HERO in the device, users have to set the center of gravity for their particular camera. From there, the gyro detects any horizontal or vertical movement, the CPU instantaneously processes that data, then activates either or both motors to compensate. As can be seen in the video at the bottom of the page, the result is a GoPro that appears to float in mid-air.

The rig is powered by an onboard 7.4-volt lithium-polymer battery, that is reportedly good for over 90 minutes of continuous GoPro-stabilizing action per charge.

Needless to say, the wire-festooned gadget pictured in this article is still a prototype. Boczon and Reilly plan on getting some demo units into the hands of professional videographers for feedback, after which they hope to begin commercial production of the device. They’re currently raising funds on Kickstarter, with a pledge of US$550 getting backers a STABiLGO of their own, when and if they’re ready to go. The estimated retail price is $699.