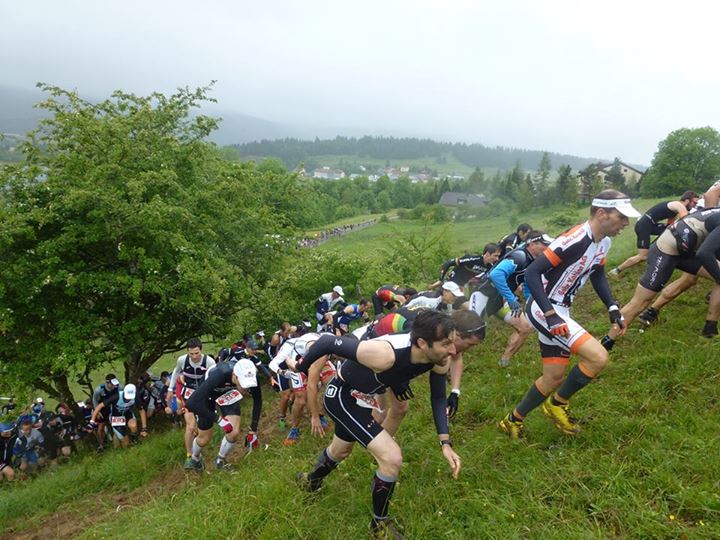 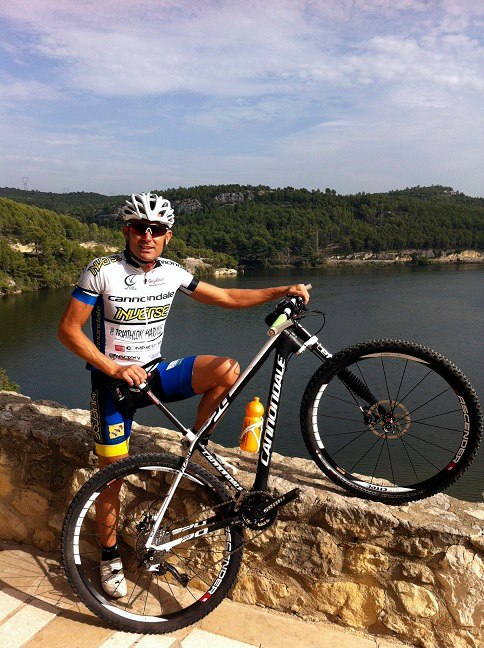 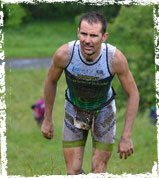 Vallee de Joux, Switzerland – Victor Del Corral and Helena Erbenova won the XTERRA Switzerland Championship on a stormy day that forced organizers to cancel the swim and turn the event into a run-bike-run duathlon.

XTERRA managing director "Kahuna Dave" Nicholas was in Switzerland to take in all the action and brings us this report.

The day started badly and never got much better. Temperatures at 7am were in the mid 40's and then the rain started. It never became a downpour, but it never stopped. The weather for the 9:15am XTERRA Lite made it clearly a duathlon. We did not make a decision on the Championship race until noon and while the differential between the water temp and air temp would have allowed a shortened 750m swim by a scant .2 of a degree, the rain and wind were simply too much. At 1:00pm we called it a duathlon and prepared for the 2pm start.

With that call the smart money was on Victor del Corral (a former duathlon world champ) and Helena Erbenova. Both are strong mountain bikers and can run like deer. The race became a 5K run – 24K bike and 10K run. We started the pros with a 2 minute lead over a large age group field.

Victor did not disappoint and came splashing into T2 with a healthy lead over Frenchman Cedric Lassonde and young Belgian Yeray Luxem. Erbenova had a similar lead over Marion "Bubu" Lorblanchet and Swiss racer Andrea Huser.

A farmer had come out on Friday afternoon and closed down his property (despite having agreed to let the bike course go through months before) and organizers were reconfiguring the bike course until 1am and then back out at 5am to finish marking...aah, the life of a race organizer.

The bike became largely small country road, jeep road and mud pit. Two laps of 12K each plus a nasty, muddy, slippery downhill to T2. Hector Guerra, who made us notice him with his 4th in Spain, took the lead on the bike with Victor tied to his wheel at the end of the first lap. Behind them it was dirt chaos. Yeray was riding well in 3rd but had been caught by Czech veteran Jan Kubicek and Frenchman Nicolas Fernandez. The hot guys were nowhere. Asa Shaw’s legs went dead and Ben Allen simply could not get going. Cedric Lassonde had his usual crash that dropped him back a bit, but Brit Llewellyn Holmes was having a career day. Full of mud and passing dozens after a decent run, Holmes put in the 7th fastest bike of the day.

Erbenova led easily after the first lap. Kathrin Muller, who is having a great season, was second and Swiss Andrea Huser was showing some great biking skills in 3rd. Renata Bucher was riding comfortably in 4th with Lorblanchet in 5th. Once on the second lap, our Swiss Miss put the pedal down and led the field into T2. Lorblanchet had bike troubles and dropped back, and it was Bucher, Erbenova, Huser and Muller.

The quick feet of del Corral and Erbenova proved decisive. Guerra led into T2 as did Bucher but it took just one lap of the 5K run course for Victor and Helena to take the lead. Renata slowed on the run and newcomer Huser proved she was all-around strong by keeping her place off the bike, passing Bucher and holding off Muller for a fine second in very difficult conditions. For the women, positions 2-3-4 finished under a half minute blanket with Helena out front by well over two minutes. Lorblanchet ran hard and well, but her bike problems kept her in 6th behind young French pro Coralie Redelsperger.

Victor put in the fastest run but still was just 20+ seconds ahead of an impressive Guerra. Luxem and Kubicek were together the whole race. Jan caught the Belgian on the bike but the two stayed within feet of each other all the way to T2 and into the run. Luxem finally pulled away for his second 3rd in two races and Kubicek showed he still has it with a 4th just 10 seconds back. Another up and comer from the Czech Republic – Pavel Jindra came 5th with Frenchman Fernandez 6th and an overjoyed Llewellyn Holmes a very nice 7th.

Big shaking up of the standings as Ben Allen and Asa Shaw could not break the top 10 simply having miserable days.

The handsome Spaniard Hector Guerra has two top 5 finishes and will finish the season with us hoping for more. Del Corral is back and will try to make France this week. What appeared to be a Ben Allen/Asa Shaw show now has a very different look and let us not forget the Professor Nico Lebrun who passed on Switzerland to recover from a nagging illness. The Euro season is still not half way through and we have three different mens winners in the first three races. France is but a week away and then there is a break before Italy with Czech and Germany back-to-back in August. Who knows what we’ll find going into the finals in England in September.