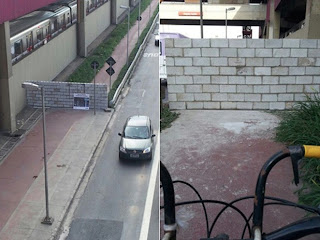 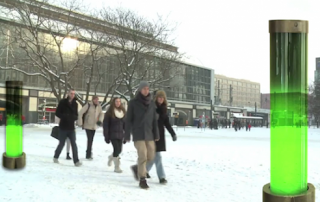 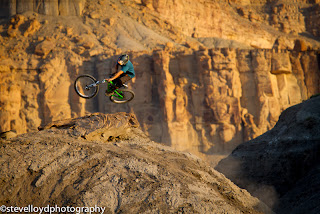 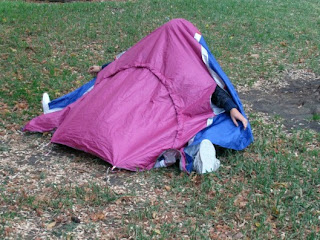 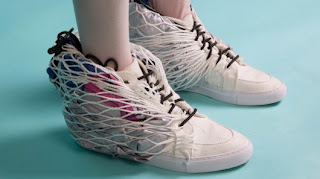 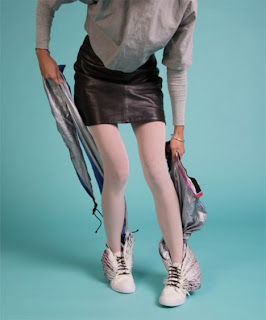 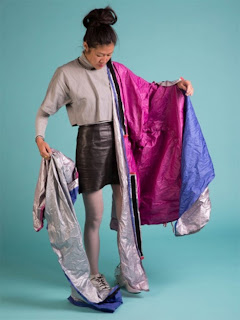 Sibling's Walking Shelter packs a tent into a pair of shoes

Recently unveiled by Australian design collective Sibling, Walking Shelter is a sort of tent designed to be stowed away in netted compartments on the backs of your shoes.

Sleep an hour in my shoes (Photo: Sibling)Sibling's Walking Shelter is a sort of tent you stow away in your shoes (Photo: Sibling)Putting up the Walking Shelter appears not to be an entirely dignified procedure (Photo: S...Sibling describes this as a one-off prototype, developed for an auction to raise money for...View all
If there's a weakness to this otherwise inspired concept, it may be that it relies on the human body for structural support. So though you can make a vaguely tent-like shape by sitting bolt upright …
)

… it may be that, if you're hoping to get some actual sleep, you'd be better off with a good old fashioned tarp.

However, Sibling describes this as a one-off prototype, developed for an auction to raise money for small Australian charity Little Seeds Big Trees which provides art therapy for children. We can't argue with that. 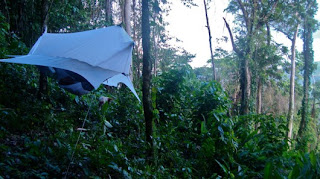 Nube turns any camping hammock into a suspended shelter

When it comes to camping in comfort, sleeping in a hammock usually beats the cold ground, but you tend to lose the protection from the elements that a full tent normally provides. We've seen some suspended tents that address this problem before, like the Exped Ergo Combi and the Stingray, but a new product from Sierra Madre Research may have them beat in terms of all-around usefulness. The Nube attaches to any camping hammock to form a completely enclosed shelter that keeps you and your gear off the ground.

A series of lines connected to trees and the ground keep the top waterproof layer taut, pr...The bottom of the hammock tent is mainly comprised of a mesh Insect Shield, which keeps bu...The Nube is also spacious enough inside to fit two hammocks on top of each other like bunk...In the center of the Insect Shield is a Gear Storage Area, which sags a little lower to th...View all
The Nube (pronounced "new-bay") is the brainchild of Richard G. Rhett Jr., who founded Sierra Madre Research following a fateful trip to Honduras, where he found himself dissatisfied with other camping hammocks and concerned at the quality of the drinking water there. Soon after, he set up a production facility in Nicaragua to manufacture high-quality camping gear, with a portion of the profits going towards drilling clean water wells in impoverished areas.

Rhett designed the Nube shelter to be compatible with any camping hammock by attaching to its suspension lines and creating a tight seal that keeps water and insects out. A series of lines connected to trees and the ground keep the top waterproof layer taut, providing a firm barrier against wind and rain. Ideally, the portable shelter can be supported by a couple of trees, but a pair of sturdy walking poles will work just as well. Once it's suspended, anyone can enter or exit the Nube using a zipper on the side that runs up almost the full height of the shelter.

The bottom of the hammock tent is mainly comprised of a mesh Insect Shield, which keeps bugs out while allowing a cooling breeze to flow through. In the center of the Insect Shield is a Gear Storage Area, which sags a little lower to the ground and is made of a slightly thicker nylon than the top. This part of the Nube is attached to the hammock's suspension lines, keeping any gear safely elevated off the ground but easily accessible. It can also be converted into a layer of insulation on colder nights by packing it with clothes and raising it right underneath the hammock.

Rhett designed the Nube shelter to be compatible with any camping hammock by attaching to ...
When put together, the Nube measures 13 ft (4 m) long and 8.5 ft (3.3 m) wide, making it large enough to act as a standalone tent for group get-togethers when the bottom and hammock are lifted higher. It's also spacious enough inside to fit two hammocks on top of each other like bunk beds, and the bottom storage compartment is strong enough to support a small child if needed.

Each Nube comes with a set of eight 2 mm Dyneema cords, eight stakes, and a compression bag for the shelter. The entire shelter, minus the stakes, can be packed into a bundle just 10 x 6 x 6 in (25 x 15 x 15 cm) and weighing only 2 lbs (0.9 kg). Even with a hammock, Sierra Madre Research states the whole system will only weigh around 3.5 lbs (1.6 kg) altogether..

In the center of the Insect Shield is a Gear Storage Area, which sags a little lower to th...
Thus far, some prototypes of the Nube have been successfully tested in Honduras and Puerto Rico, but there may be some changes made to the design before it begins production. In the near future, Rhett hopes to add guy-line holders to keep all the cords together and an inside pocket for storing a phone and other items.

Sierra Madre Research recently launched a Kickstarter campaign to bring the Nube into mass production, which reached its goal of US$30,000 within two days. Anyone who contributes $250 or more while the Kickstarter is running can pre-order a Nube for its expected ship date of January 2014 in either Burnt Orange or Steele Grey colors. 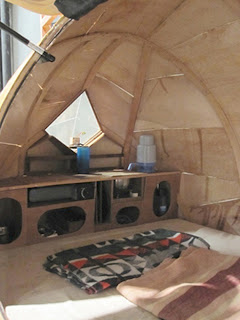 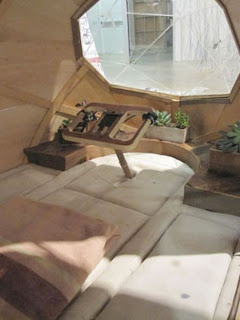 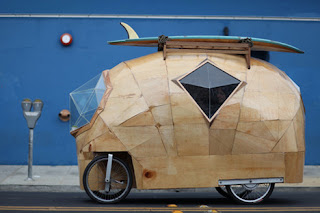 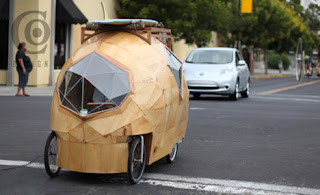 The general misconception of small spaces is that they must be bland and minimal for the sake of functionality and efficiency. But like other green building myths, that's not necessarily true, as San Francisco-based artist and designer Jay Nelson proves with the artful living quarters found in his quirky geometric campers, all of which are built up around modified, scrappy secondhand vehicles. As an avid surfer, Nelson's vehicles resemble angular beetles with wooden carapaces that wouldn't look too out of place on a sunny Californian beach -- complete with handmade, laidback interiors to match. Take a look inside: