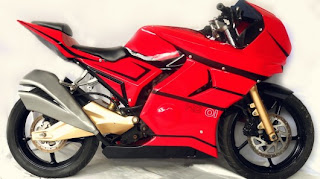 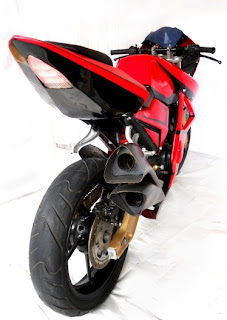 Young Bike Designer -- Anoop Nishanth. [RED PIX]
Anoop Nishanth -- A young bike designer from Chennai who completed his Automobile Designing in DYP-DC Pune. He designs hand made sports bikes completely with his own ideas and designs, he is planning to became a professional bike designer in future.

It comes as a bit of a surprise when you gaze at the sleek lines of the Maxx Speed 01 (MS 01), to discover that it was built by a 24 year-old designer for a total cost of US$3,000. Modeled on a racing motorcycle platform, Anoop Nishanth's concept bike is inspired by the contours of a jumping lion, The Transformers and Ironman. The bike can reach a top speed of 87 mph (140 km/h) without a pillion rider and 68 mph (110 km/h) with one. Marrying the classy looks of an elegant race bike with above-average performance compared to normal motorcycles, the MS 01 is in a group all by itself – a race bike look-alike that almost anyone can afford to buy.

Front view of the MS 01Rear view of the MS 01Overall design is inspired by The TransformersLamps that look like Ironman's arc reactor are used as head lampsView all
Nishanth, currently based in Chennai, Tamilnadu, India, admits he didn't actually set out to create a low-cost race bike for the man on the street. "All I wanted was to build a racing bike concept for myself, so I took inspiration from what I liked and incorporated all of that in the design of the MS 01," he tells Gizmag.

Aside from a 150-cc Hero Honda CBZ Xtreme engine stripped from an older bike, every other part of the MS 01 is hand-sculpted without any machinery. This includes the handlebars, headlamp, swing arm, exhaust, footrest and seat. With the help of a mechanic and the best tinker he could find, the designer sculpted all the forms of the bike in thermocol (a thermoplastic polymer) before casting them in metal.

Built over a period of five months, the MS 01 has a number of unique aspects. Well-balanced, with no engine heating issues, the bike has a pillion seat designed to appear like a cowl when seen from afar. "The pillion seat was added because in India we use a normal motorcycle as a car, i.e. three to five people travel in it," explains Nishanth.


The open free-flow exhaust is designed in such a way that it mimics the roar that a track racing bike makes, which he says was a challenge to achieve with a 150-cc engine. Certain parts were re-engineered to give the bike a more sporty, aggressive appearance, and the bike as a whole was tested to withstand driving on Indian roads. Within city limits, the MS 01 gets a mileage of about 25-28 miles (40-45 km) per liter of petrol (at average speeds of 31 mph or 50 km/h), and about 23-28 miles (38-40 km) per liter outside the city (at speeds of 56 mph or 90km/h).

Though building the bike was tough by itself, what is tougher according to Nishanth is trying to get the design essence into the community. "People here are more utility-based," says Nishanth. "Most of them here in India buy a bike or car based mostly on factors like fuel efficiency and maintenance. They don't really bond with the design and I want people to begin to feel a bond, and support design more than they do now."

Nishanth is currently assembling a team of innovators to build more futuristic motorcycles that incorporate safety features, through his design studio called Maxx Speed Designs.They are currently taking orders for the MS 01 as well as customized bikes designed around the rider's personality, both nationally and internationally.