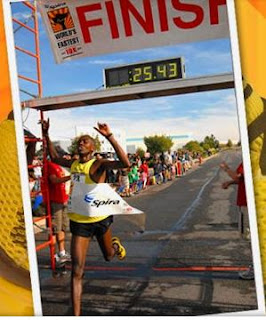 but the official record is 33 sec far 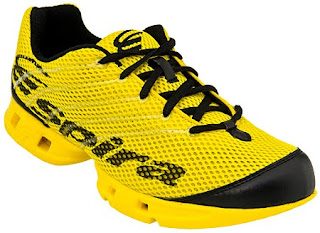 A buffer between the foot and the pavement has been dreamed for many years by shoe designers for such a long time. Finally Spira Shoes has come up with a solution to this problem when they came up with the WaveSpring™ technology. This unique spira shoes technology is able to send the energy back to the wearing and you can find this amazing stuff inside every pair of Spira Shoes. This brand is able to bring back 87%-96% of the energy you normally lose when you stride while running. That energy is bright right back up your leg to give you greater endurance. Check out the video below to see this brand in action.

"Classification : ROAD RACING FLAT Product description : The Stinger is a light weight racing flat is a well cushioned training shoe that provides a high level of responsiveness and protection against fatigue issues normally associated with light weight racing shoes. It combines a level of cushioning and responsiveness that is difficult to achieve for a shoe in this weight category.
price 109 US $

WaveSpring Technology
Spira's™ patented WaveSpring™ Technology may be the most significant advancement ever achieved in the footwear industry.*

A little spring in your step can be a bad thing

Inform the buying public that using your product would be cheating. That it's banned. Not allowed.

What would seem like a hindrance could actually lead to a break for a budding brand.

In the most famous case, Nike's first pair of Air Jordans was banned by the NBA because of discrepancies with the league's uniform rules. The shoe's namesake, Michael Jordan, wore the red shoes anyway. Nike paid the fines. And sales took off.

Spira Footwear
Spira, a start-up shoe company, has made a name for itself when officials banned its use in races.
Creating controversy wasn't exactly the business model envisioned when two brothers, Andy and David Krafsur, decided to quit their jobs to start a new shoe company, Spira Footwear.

But that's exactly what the former attorney and aerospace engineer have done. Their shoes have a patented spring technology that claims to reduce the impact on a runner's feet, which leads to easier recovery and less overall exertion. It's all good for the runner, unless he or she is participating in an event sanctioned by USA Track & Field or the International Association of Athletics Federations.

Because the shoes provide an energy return and use springs, they are specifically banned by those organizations. So any runner in Monday's Boston Marathon crossing the finish line in Spira shoes risks being disqualified.

Given the sheer number of people in the race, thousands who qualified and hundreds more, called bandits, running without a number, it's highly doubtful that anyone other than elite runners would be caught.

"We can't track everything," said Steve Vaitones, referee for the Boston Marathon. "Whether it's a pair of shoes or if it's someone giving a runner a bottle with some banned substance in it."

As long as cheating isn't being done by the elite runners, officials at the Boston Marathon aren't expected to do much about it. All of the elite runners have shoe contracts and the Krafsurs have yet to dare offer an elite runner a sponsorship deal lucrative enough to be worth a disqualification.

The ban has created some buzz for Spira. The shoes recently appeared on the morning shows on ABC, NBC and Fox.

But Andy Krafsur, chief executive of the company, doesn't necessarily want to embrace the outlaw role forever. He's already had conversations with USATF officials, who so far have refused to make any changes to its rules.

"The rule is outdated," Krafsur said. "If you go back and [look through] history, all new technology was banned -- from the oversized tennis racket to the aluminum bat to the metal driver."

Krafsur said his shoes don't make a runner faster since the shoe doesn't provide more energy than a runner puts into each step. The design of the shoes, he said, simply allows the runner to recover more quickly.

"If you recover faster that means you can run more easily, which means that over time you can run faster and farther," Vaitones said. "Steroids don't allow you to see the baseball better, but if you hit it, it might go 20 to 30 feet more, which could be the difference between a home run and an out."

Krafsur contends it's not that cut-and-dry. He points out his company has 20 employees, compared to Nike's 23,000. His company is hoping for $10 million in gross sales, while Nike's will top $10 billion again this year.

"There are politics involved," he said. "If Nike came out with our technology, their shoes would be allowed."

There is, of course, the positive in the negative. The fact that the elite runners aren't permitted to wear Spira shoes at the very least suggests to the general public that there could be an advantage to using them if they can't run sub-five-minute miles for more than two hours.

Darren Rovell, who covers sports business for ESPN.com, can be reached at Darren.rovell@espn3.com

"USA Track & Field has to make a ruling on it," said Boston Marathon executive director Guy Morse. "We need more analysis than there is. That question has been lingering for, what, two years now. Technologies have changed. I think that (rule) needs further consideration from (USA) Track & Field as it relates to the equipment, because other parties don't think there's a spring in that concept."