MTB is all around 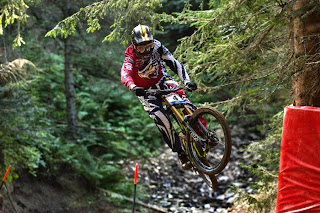 MTB is all around: exclusive 360 video

By Alex Hazle on 13 November 2012 in Mountain Bike Downhill

Use the up/down/left/right cursor keys of your keyboard or click and drag with your mouse on the video player to look in any direction during this amazing downhill run.

He and team-mates Floriane Pugin and Noel Niederberger set off down the mountain after official practice at the season-ending World Cup 2012 round in Norway, and they held nothing back…

Hafjell is an awesome location – the UCI Mountain Bike World Cup circus loves it so much after one visit that next year cross-country will join downhill on the scheduled Norway stop – and this video, a world-first for MTB, makes it look even better. Start by following Floriane down the course, then swing round to see how Noel is doing behind – you can even look down and watch Brendan soaking up every bump on the track with a bird’s-eye view!

This really is downhill mountain biking as you’ve never seen it before – no wonder it was high-fives all round for the Scott11 guys at the bottom of the hill.