Water Car Panther is the fastest amphibious car in the World - capable of 80 mph (127 km/h) on the road and 44 mph (70 km/h) on water.
http://www.flixxy.com/worlds-fastest-water-car.htm

Magician Michael Carbonaro is a magic clerk at a convenience store - with hidden cameras placed by the Jay Leno Show.

Sandwich shop workers Richard and Adam Johnson received a standing ovation for their rendition of "The Impossible Dream."

“Follow SRAM enduro racers Jerome Clementz, Nicolas Vouilloz, Rene Widlhaber, Curtis Keene, Anka Martin and many more as they take on rounds 2 and 3 of the 2013 Enduro World Series in Val d’Allos and Les Deux Alpes, France. With enduro quickly becoming one of the most progressive and interesting forms of mountain biking, enduro riders have become an essential part in the development of a new generation of components, which combine light weight, durability and flawless performance during long and hard races. SRAM XX1 is the prime example of this new breed of components, after dominating the 2013 season with 6 wins out of 7 races with Fabien Barel, Nicolas Vouilloz and Jerome Clementz.”

“This second chapter follows the best enduro racers in the world from the iconic Mega Avalanche in Alpe d’Huez to the final race of the Enduro World Series in Finale Ligure, Italy. Here, in addition to Jerome Clementz’s victory in both the race and overall, Curtis Keene, Rene Wildhaber, Anka Martin, Anneke Beerten and many more reflect on the first season of the Enduro World Series and what it means to be an enduro racer today.”
.-.-.-..-. 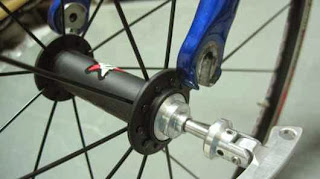 By Ben Coxworth December 13, 2013
The SPEEDrelease hub works with regular dropouts, equipped with an adapter
For the past several decades, higher-end bicycles have utilized quick-release axles in their wheel hubs, in order to facilitate fast and easy wheel removal. With the recent movement towards disc brakes on mountain bikes, however, some manufacturers have started using a more rigid, secure thru-axle setup. Given that discs should soon be showing up on more and more road bikes, Connecticut-based Topolino Technology recently unveiled its SPEEDrelease hub, which reportedly combines the best features of both systems in one lightweight design.

Quick releases axles are very easy to use – you just slide the wheel up into the dropouts, spin the axle lever around a few turns to tighten it, then push it down to lock it. Given that the dropouts are open on the bottom, however, there's always the danger that if things aren't sufficiently tightened or lined up, the wheel could fall off in mid-ride. Additionally, the design does allow the axle to flex somewhat.

Thru-axles are stiffer and safer, in that a bigger, beefier removable axle is pushed in from the side, and threaded into place. Getting that axle aligned can take a bit of fiddling, though, plus there's a chance that it could get left on the ground and forgotten when the wheel is removed.

The SPEEDrelease incorporates a permanently-attached skewer running through the center of the axle – it's sort of like the skewers used in quick-release axles, but thick like a thru-axle. When the wheel is slid into a set of standard dropouts, one of which is equipped with a threaded add-on receptacle, the tip of the spring-loaded skewer is simply popped into that receptacle from the side. At that point, even if everything is left loose, the wheel can't fall off.

To snug things up, the skewer is threaded the rest of the way into the receptacle simply by spinning its lever a few turns and folding it down – just like you do with either a quick release or a thru-axle.

The entire process is demonstrated in the following video.

The whole setup, including the receptacle, tips the scales at just 140 grams – an even lighter titanium version is on the way. That said, it reportedly offers twice the bending stiffness of a traditional quick release. It's also authorized by the UCI (Union Cycliste Internationale), so it should be kosher to use in high-profile bike races.