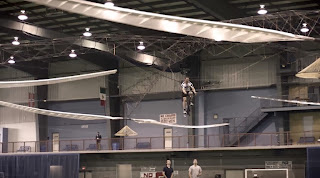 The Sikorsky Prize is claimed
The prize-winning flight of AeroVelo's Atlas (Video still: AeroVelo)
If you look at old newsreels of crackpot inventors and their flying machines, they usually include shots of someone pedaling like mad inside a helicopter-like contraption with rotors whirling about in a frenzy while the machine remains firmly rooted to the ground. It’s funny, but perhaps we laughed a wee bit too soon. On June 13, AeroVelo's Atlas helicopter scooped up the US$250,000 Sikorsky Prize for a human-powered helicopter that manages to fly for over a minute and attain an altitude of over 3 m (9.8 ft) while remaining within a 10 m x 10 m (33 x 33 ft) box. The Sikorsky Prize remained unclaimed for 33 years.

With its four rotors arranged in a square formation and powered by the pilot working the pedals furiously, the Atlas set a world record with its flight time of 64.11 seconds. The aircraft flew to a height of 3.3 m (10.8 ft), and deviated from an effective standstill by only 9.8 m (32 ft). The flight consisted of a 10-second ascent followed by a very gradual return to Earth, during which the pilot had to work against drift. This is a remarkable achievement when you consider that in August 2012 it flew for four seconds only to be followed by two crashes this year. 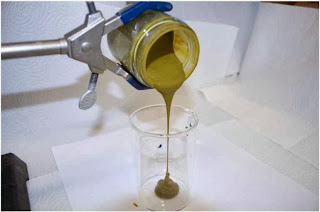 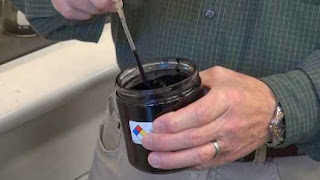 By Francis X Govers III December 24, 2013
Biocrude produced using the new process
Image Gallery (5 images)
Engineers at the US Department of Energy’s Pacific Northwest National Laboratory (PNNL) have created a continuous process that produces useful crude oil minutes after harvested algae is introduced. This new process does not require drying out the algae, which grows in water, saving time and energy that would be otherwise wasted. The final product can be refined into aviation fuel, diesel, or gasoline.

The algae slurry that starts the process can be up to 80 percent waterSteps in the process for making fuel from algae – the algae slurry, crude oil, and refined...This muck may fuel your car in the futurePNNL lab manager Tom Hart, pouring some of the unprocessed algae View all
The process mimics some of the conditions that originally turned prehistoric plant material into fossil fuel deep within the earth – high pressures and temperatures.

Algae, an aquatic plant, has long been considered as a biofuel source, but the steps needed to turn a wet, green plant into clear, burnable fuel have been both expensive and time-consuming. The algae had to be processed in a series of steps, one of which involved drying it out and removing all the water, which might be 80 percent of the biomass. Then solvents were used to extract energy-rich hydrocarbons from the dried material.

The PNNL team created a continuous process that starts with the wet algae and subjects the entire mass – water, algae, and all – to high temperatures and pressures, in this case, 350ºC (662ºF) and 3,000 psi.

"It's a bit like using a pressure cooker, only the pressures and temperatures we use are much higher," said Laboratory Fellow Douglas Elliott, the leader of the research team. "In a sense, we are duplicating the process in the earth that converted algae into oil over the course of millions of years. We're just doing it much, much faster."

The products of the process include crude oil, which can be further refined into aviation fuel, gasoline, or diesel fuel (in tests, the process achieved between 50 and 70 percent conversion of the algae’s carbon into fuel); clean water, which can be used to grow more algae; fuel gas, which can be burned to make electricity or cleaned to make natural gas; and nutrients like nitrogen, phosphorus, and potassium – needed for growing algae.

Genifuel Corporation has licensed the process, and has been working with the team at the lab since 2008. The company intends to team with some industrial partners to create a pilot plant using this process to make biofuel in industrial quantities.

The process was detailed in a recent paper published in the journal Algal Research.
http://www.sciencedirect.com/science/article/pii/S2211926413000878
More information on the technology is available in the video below.