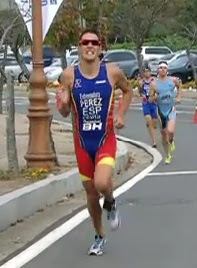 Russia’s Dmitry Polyansky blasted away on the run to secure his first victory of the season at the 2011 Tongyeong ITU Triathlon World Cup on Saturday. Spain’s Jose Miguel Perez and Belgium’s Simon De Cuyper both broke through for the first World Cup podiums of their respective careers.

It was the elder of the Russian Vasiliev brothers, Ivan who led the swim among the 50 athletes that began the race under clement skies for a non-wetsuit swim in Tongyeong. Ivan Vasiliev and Richard Varga (SVK) led a pack of 26 out onto the bike course with Russian teammates Igor Polyanskiy, Dmitry Polyansky and Denis Vasiliev just metres behind.

The riders, led by Namibia’s Abrahm Louw, attacked the two sizable hills on the bike course with a pack of 15 athletes less than 30 seconds away on the chase, including Belgium’s De Cuyper. From the second lap, the ride had turned into a game of cat and mouse. Firstly the front group dropped five athletes into the chase with a lead of 45 seconds, and ended with the chase catching up to form a huge 35 strong group by the bell lap.

Out of T2 Dmitry Polyansky wasted no time in pulling away and laid down his lead on the run. A syndicate of eight athletes were scheming behind him that included local favourite Min Ho Heo, Aurelien Raphael (FRA) and Perez, but Polyansky’s lead only widened as the laps concluded. A fight for silver and bronze then ensued in a pack of seven athletes who refused to back down.

With such a domineering lead, Dmitry Polyansky could not be challenged and crossed the line for gold in a time of 01:49:33.

“My late season has been very good for me and I really love Asia because of the beautiful people and great organisation of races and I always try my best here,” said Polyansky. “When I began the run, it was really hard for me because it was a very hard season but I tried my best.”

Over ten seconds behind Polyansky on the last lap, Perez and De Cuyper made a final push to overtake Raphael with the chance of a medal tantalisingly close. The pair reached their goal as Perez managed to hold off De Cuyper for silver and the Belgian took bronze, both realising their first ever place on a World Cup podium.

“It was a very hard race, last week I raced in Huatulco in very hard conditions, with the travel it was so hard for me to race,” said Perez.

“It’s really unbelievable because I came here with a goal of top 20 and that would be my best World Cup ever,” said an elated De Cuyper. “I knew in the first group, everything is possible now, it’s all in and I have to give everything I have. Maybe I started a little bit too fast in the first five kilometres but in the end I could come back and I could finish with a good sprint to out-sprint (Aurelien) Raphael to get third, it’s unbelievable, I’m very happy.” 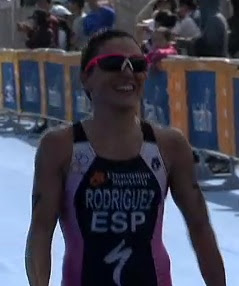 More than 13 years after her first ITU World Cup appearance, France’s Jessica Harrison finally stood atop the podium with gold. She entered the Tongyeong ITU Triathlon World Cup brimming with confidence following her recent French National Championship win and season-best at the World Championship Grand Final in Beijing. But her victory in Tongyeong today, her first World Cup title, was a long awaited and special moment for Harrison, a veteran whose ITU career began in 1995.

“It went as well as I could have expected. It’s feels pretty good, it’s been a long time coming,” said Harrison after the race. “I’ve been racing World Cups since 1998 so little by little I’ve been getting up the ladder and I hope that could be an inspiration for the girls who aren’t world beaters when they’re 18. With hard work and really concentrating on the details, you can get there in the end and I’m really happy.”

The morning saw 41 women dive into Tongyeong bay for a two-lap, 1.5km wetsuit swim. Line Jensen (DEN) had gained twenty seconds over her nearest challengers exiting the swim, but Harrison (FRA) had already placed herself at the front leaving T2 in second place.

Jensen’s lead was short lived as she was swallowed by the chase pack on the first lap by a group that included Harrison, Carole Peon (FRA), Yun-Jung Jang (KOR), Mariko Adachi (JPN), Aileen Morrison (IRL) and Zuriñe Rodriguez (ESP).

The hilly bike course suited strong riders like Harrison who took her turn to head up the pack of 12 that continued out front for the remainder of the ride. A chase pack containing Kiyomi Niwata (JPN), Mateja Simic (SLO) and Kathrin Muller (GER) retained a 75-second deficit all the way into T2.

The leading 12 athletes began the run within seconds of one another, but the group soon separated as both the day and the race heated up. Harrison began to pull away almost immediately on the fast run course and behind her the field was spreading out. After the first lap Morrison was eight seconds behind in pursuit of Harrison with Rodriguez a further seven seconds back.

Meanwhile, Niwata and Muller had steamed onto the run and by the second lap had overtaken a number of the women who were in the lead group. But by the bell lap, Harrison was way out in front and proved untouchable all the way to the finish tape, celebrating her first ever ITU victory. She broke the tape at 2 hours and 41 seconds.

“It’s been a tough season to be honest, up until Beijing,” said Harrison. “I picked up a pneumonia in Mooloolaba and it wiped me out for quite a while so it took a long time to get back up to the level that you need to be at to compete against the girls, especially the younger girls these days. I had a really good race in Beijing and that’s been a springboard for a nice end of season. I’m just happy to be back on form.”

Morrison, less than a week after her fourth place finish in the Huatulco ITU Triathlon World Cup celebrates her second World Cup silver of the season, after Ishigaki, holding her second place spot throughout the run.
“I’m pretty pleased with that, it was all about getting a good swim. I didn’t expect Jess to run so fast but she put on a solid run there and I couldn’t stay with her. But I’m delighted with second,” said Morrison.

Rodriguez similarly maintained her third place position during the run to claim her first ITU Triathlon World Cup podium, crossing the line nine seconds behind Morrison for the bronze.
Peon made an impressive return to competition, finishing fourth after an injury sidelined her since London. Adachi rounded out the top-5.

Muller and Niwata both made up an incredible distance on the run to finish 7th and 8th respectively. Jang was the top finisher for the home team, crossing the line in 14th place, the best World Cup showing of her career.
Elite Women
1. Jessica Harrison FRA FR 02:00:41
2. Aileen Morrison IRL IE 02:01:09
3. Zuriñe Rodriguez ESP ES 02:01:18