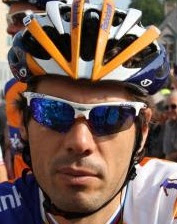 Three-time world champion Oscar Freire has signed a one-year deal with the Russian Katusha team, in the process rebuffing offers from Omega Pharma-Quick Step, Lotto-Ridley and Geox, who were also interested in securing his services for the 2012 season. The deal between Freire and his new team was signed just hours before the deadline set for the registration of ProTeam riders with the UCI.

Freire is reported to have been swayed by Katusha because the Russian team will have a number of other Spanish riders on its roster next season, including stage race leader Joaquim Rodríguez. Freire was also tempted by Katusha’s well-organised structure, its guaranteed entry into WorldTour races and the fact that the only other sprinter on the team is young Russian Denis Galimzyanov.

After his nine-year link with Rabobank ended apparently due to a misunderstanding about Freire’s intentions for next season – the Dutch team was led to believe the Spaniard was intending to retire – Freire and his brother/manager Antonio have been adamant that they would only consider offers for teams guaranteed access to the biggest races on the world calendar. Freire would like to have one more shot at Milan-San Remo and the World Championship, both of which he has won three times, as well as giving himself the chance of a fourth Olympic appearance in London, where the course should suit his all-round talent.

Freire, who will turn 36 in February, will be the seventh Spanish rider on the Katusha roster, joining Rodríguez, Dani Moreno, Joan Horrach, Alberto Losada, Xavier Florencio and Ángel Vicioso. The latter two have recently signed with the Russian team. Both are fast finishers who should provide Freire with useful support in bunch sprints.

Freire may also work with Mark Cavendish’s sprint mentor, Erik Zabel, who is joining Katusha following the withdrawal of HTC-Highroad from the sport. The two men faced up many times on the road, most notably at the 2004 edition of Milan-San Remo, when Zabel started celebrating victory slightly too prematurely and Freire came through to take his first San Remo success by a tyre’s width.


Follow Cyclingnews on Twitter for the very latest coverage of events taking place in the cycling world - twitter.com/cyclingnewsfeed