Holland Gets an Unnatural High

When the Dutch built the Netherlands, they forgot to add any mountains. The highest point in Holland is a measly 323 meters, compared to 2,962 meters for the highest mountain in Germany. Possibly inspired by architect Jacok Tigges’ proposal for Berlin, Dutch journalist Thijs Zonneveld recently suggested that the Netherlands deserves a fake mountain of its own. Unlike Tigges’ purely theoretical proposal, the people behind Die Berg Komt Er (video) (The Mountain Is Coming) are taking their landscape-building mandate seriously. The mountain has turned into a movement.

Different designers have different visions for this god-like task. DHV situates their Bergen in Zee, an exact replica of Mount Fuji, in the ocean near the town of Bergen aan Zee. It would rise 2,000 meters, occupy an area the size of Disney World, and provide sustainable power for the mainland. Hoffers and Kruger place it in the land or the sea, and fill up their hollow structure with everything from aquariums to sport arenas to farms. Regardless of the particulars, the Nederlandse Berg would be the biggest and costliest manmade structure in history. If the mountain is actually realized, it will certainly prove one thing: The Dutch will let nothing stand in the way of a nice weekend of skiing. 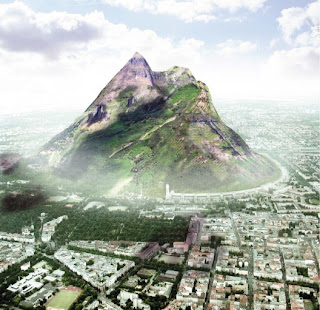 The Berg: The biggest artificial mountain in the world
12
Nov 2009
By Sebastian J — Filed under: Landscape , Berlin, Germany, Jakob Tigges


German architect Jakob Tigges has projected a new and visionary landmark in Berlin. He plans to build a mountain of 1,000 meters high called “The Berg”, which would become a never-before-seen tourist destination in the German capital city. Seen at Plataforma Arquitectura.

The objective is to create a natural habitat for the mountain’s wildlife and at the same time, become a recreation space for everyone in the city. “The Berg” would take the place of the Tempelhof Airport, a space currently under discussion. Surprisingly, there’s a big group supporting “The Berg” and people are pressing to get the approval and financing of the project.

While big and wealthy cities in many parts of the world challenge the limits of possibility by building gigantic hotels with fancy shapes, erecting sky-high offce towers or constructing hovering philharmonic temples, Berlin sets up a decent mountain. Its peak exceeds 1000 metres and is covered with snow from September to March…

Hamburg, as stiff as fat, turns green with envy, rich and once proud Munich starts to feel ashamed of its distant Alp-panorama and planners of the Middle-East, experienced in taking the spell off any kind of architectural utopia immediately design authentic copies of the iconic Berlin-Mountain. Tempelhof no longer only is on Berliners’ minds: People come in focks to – not to see the mountain. Thus,

Come and see The Berg!