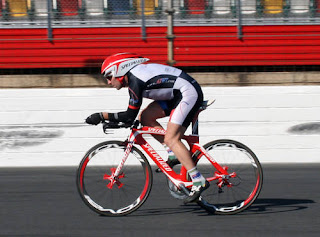 
How aero is aero?
By Jeff Jones

You want to get faster against the clock. You want to know if you spend X you will get Y time savings in return. Problem is, you're bamboozled by a plethora of marketing hype and scientific data put out by companies who want you to buy their stuff, whether it be snazzy equipment or even time in a wind tunnel. Where do you start?

Let's break it down into a simple question:

How much time can you save by going from your normal road bike and helmet to adding clip-on handlebar extensions to a full-on time trial bike with an aero helmet? That's it. All other equipment (wheels, tyres, clothing) stays the same.

The answer is quantifiable but finding it is another matter. You need to know what you're doing, and most of us don't. Luckily there are people called engineers in the cycling world whose job it is to find the answers to these questions.

We were given the opportunity to spend a day with Specialized's young aerodynamicist Mark Cote at the A2 Wind Tunnel and Lowe's Motor Speedway in North Carolina. It's NASCAR heartland here, and they put a lot of money into aerodynamic testing facilities.

The A2 Wind Tunnel, the smaller brother to the AeroDYN tunnel, is used to test small vehicles and bicycles. It's one of the cheapest in the US at $390 per hour (compared to $800/hr for the San Diego tunnel) and the tunnel managers Mike Giraud and Dave Salazar know exactly what they're doing when it comes to bikes. Plus they can compare wind tunnel data to on road data by using the nearby Lowe's Motor Speedway, a 2.3km banked NASCAR oval.

For the test, Mark enlisted the help of Nathan O'Neill, eight time Australian time trial champion who has raced for European and US pro teams for the past eight years. He's coming off a 15 month ban (expires November 12, 2008) after testing positive for the appetite suppressant Phentermine, which bizarrely is legal out of competition but illegal in competition. But his experience as a wind tunnel subject, time trialist and of course his availability makes him an ideal test rider.
How it's done

Wind tunnel measurement is currently considered the gold standard of bicycle aerodynamic testing. For best results, you need the rider on the bike to be able to hold their position stable while pedalling. You can test the bike alone, but it makes more sense to have someone on it, because the overall shape will be completely different. You also need to test over a range of yaw angles (wind direction relative to the rider's direction) to account for crosswinds, because aerodynamics are significantly affected by wind direction.

The downside of doing this in a tunnel is that you can't account for handling in a crosswind, because the bike is fixed to a set of rollers.

Testing outdoors is useful because it's closer to real world conditions. That said, it's time consuming and you still need to control as many variables as possible. Even if you have a smooth flat track and precise measuring equipment, like the SRM cranks and mobile weather station that we had, too much wind will give you large errors, even greater than what you are trying to measure.

They compared wind tunnel data with track testing at the Lowe's Speedway and the Asheville velodrome, which consisted of several 10 mile and 1km time trials at a constant speed of 40km/h. They were lucky to have near ideal conditions for the outdoor tests, which kept the measurement errors down to around 2% of total power. The corresponding errors in the wind tunnel are under 1%. From doing this, they found the outdoor testing validated the wind tunnel testing, but did not replicate it.

Also, the bigger the crosswind, the better off you are on a time trial bike because of the sail affect. Of course, you've got to be able to keep the thing upright...
Drilling down

So how do we break down that 70 watt saving? How much is position, how much is the bike, how much is the helmet and how much is the wheels? That was the purpose of this test, although we didn't actually test different wheel configurations, so we were looking at ~60 watts worth of savings.


For each one, we used the same wheels (Roval) and tyres, and Nathan rode in a short sleeved skinsuit with arm warmers and full finger gloves, but no shoe covers. The mass of the bike + rider was 83kg.

All five setups were tested over two laps (4.6km) of the Lowe's Motor Speedway at as close to 40km/h as we could get. The tests were repeated in the wind tunnel later that day. During each test, Mike Giraud acted as a control, riding his bike around the circuit at ~32km/h, with a wind probe attached to the front of his bike that could measure wind speed and direction. The probe looked like it could double as a harpoon, but luckily there were no whales on the circuit.

On the plus side, the trends were accurate and there was still that big 77W (25%) difference between the road bike and the full TT setup. And it looked as though position would account for about half of that. But as for deciding how much the bike was worth relative to the aero helmet, it was tough. This appeared to be because of an unreliable data point, as the time trial bike plus road helmet should have required about 240W rather than 263W at 40km/h. We suspected this was because of an SRM calibration error, rather than the wind on the track, but at the time of publication this was a known unknown.
Wind tunnel testing

[*The power req'd at 40km/h is aero power only, hence it's significantly lower than the power measured out on the track. On the other hand, the CdAs outdoors and in the wind tunnel are closely matched. This is more what we're interested in.]

That's 60 watts accounted for in savings. The July tests showed 70 watts, but the wheels were also changed in that one so we can guesstimate that HED 3 Trispokes will save an extra 10 watts over Hed Bastogne wheels. Since there were other differences (wore a TT3 in July vs. a TT2 this time, and a skinsuit vs. road wheels) we have to be careful in making this conclusion. But if it is made, it also shows that the Roval wheels tested about the same as the trispokes and the Roval wheels saved about the same 10 watts the trispokes did.

How much is it worth? That's for you to decide.
Notes:

We only used one rider and one set of equipment, which is great for controlling variables but it means we shouldn't generalise too much. We did anyway....
Some of the savings going from the road bike with clip-ons to the time trial bike are due to position, not just frame aerodynamics
Apart from the 'high' CdA in the Transition | Road Helmet | Aerobars track test, the other CdAs were all within 3% of the tunnel data. Not perfect but good for power testing, according to Mark Cote.
You will save more time but fewer watts at slower speeds with these improvements. The constants are the percentage aero drag savings.
You can quickly learn a lot from wind tunnel testing, provided you have people who know what they're doing.