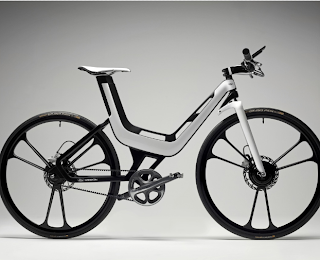 At Just 5 Pounds, Is Ford E-Bike the Perfect Urban Vehicle?

When you think of a Ford the first thing to come to mind would probably be one the automaker’s popular models like the Mustang or F-Series pickup. Although Ford is mainly known for it’s long line of cars and trucks, the automaker recently unveiled the E-Bike concept in Frankfurt.

The E-Bike concept was meant to show how Ford’s design language would translate into a bicycle. The E-Bike concept demonstrates Ford’s electric mobility competence. The concept is made of aluminium and carbon with a frame that only weighs just over five pounds. The drive system consists of a motor in the front wheel hub and a lithium-ion battery in the frame. The bike has a range of about 53 miles.

How much would one cost? Who knows, but it definitely wouldn’t be cheap.

How to Crack a Combination Bike Lock in Less Than 30 Seconds, No Tools Required (Video)

If you secure your bike with a standard four-digit combination lock, it’s time to invest in something better. (Need suggestions? Check out this guide by REI.)

That’s because these locks are incredibly easy to hack. Without any special tools (bolt cutters, hacksaws or chisels), one guy shows how you can crack a combo lock in less than half a minute.

The video above shows how this works, but essentially you align the numbers, beginning at 1-1-1-1. When you tug both ends firmly, carefully look to see if there are any gaps between the first two numbers. If there are, you have the first digit cracked. If not, increase the number until you see such a gap. Repeat for the next three digits.

It should go without saying that you shouldn’t use this knowledge for evil, so don’t go stealing any bikes because that’s just bad karma.