The particular folding mechanism allows this bike to shorten the frame to facilitate entry to elevators, trains and all kind of public transportation . Also has a second folding position for car boot storage. 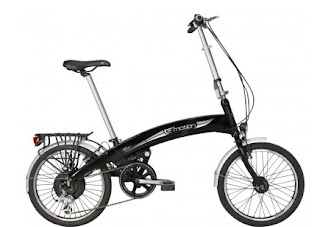 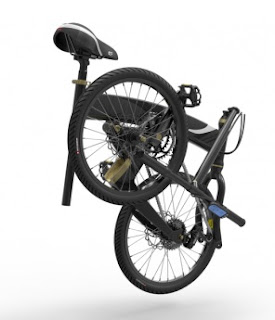 Folding electric bikes may not be a new thing, but they've come a long way since 2005, when a game of "spot the battery" was unlikely to provide any more than .6 of a second's entertainment. More recent models such as the VeloMini, Bik.e and db0 have benefited from advances in EV technology, and now the NEO VOLT comfortably continues the trend. At first or second glance, you mightn't spot that its an electric bike at all.

But an electric bike the NEO VOLT is, and a fairly capable folding electric bike it appears to be: ITEM, which has designed the folder for BH Bikes, hasn't revealed the capacity of its "generous" battery (perhaps it's yet to be finalized), but does claim that it's "autonomous" up to a range of 90 km (56 miles), presumably meaning the rider is not required to pedal to assist the 250 W motor over that distance.

The battery is removable for remote charging, and slots discreetly onto the NEO VOLT's top tube, actually making up the bulk of this part of the frame so far as volume is concerned, despite being compact as electric bicycle batteries go.

Unique to the NEO VOLT is its patented folding system which, in addition to the obligatory riding and fully folded positions has an intermediate "shortened" configuration, for easier access to public transport and elevators. ITEM claims that the bike "lets you set three fixed positions just by pressing a button," but given the fully folded position requires the removal of the front wheel, it may require just a little more effort than that.

We can see no mention yet of the NEO VOLT at the BH Bikes website, and assume this thing is still in development. Pricing and availability info appears to be scarce, but we've asked ITEM for details and will let you know if we hear more.

The video below gives some idea of how the NEO VOLT folds up, though obviously a hands-on demo would be preferable.

"The difference between these two models is basically the choice of components," ITEM's Javier Cuñado Landa told Gizmag. "Neo Volt Sport has got better shifting gear, hydraulic disk brakes and so on. Neo Volt is more urban with mudguards, light and more standard shifting and brakes."