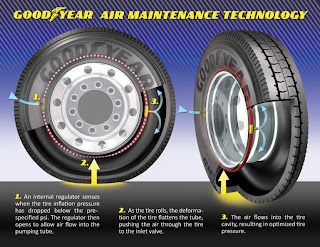 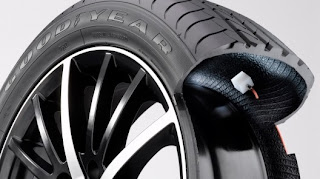 In the days before full-service gas stations went the way of the dodo, in addition to filling ‘er up, the attendant would sometimes check the tire pressure. These days that task, along with actually pumping the fuel, has totally fallen back on the driver, but it’s a job that is easily overlooked. This leaves many people driving around on tires at less than optimal pressure resulting in reduced performance and fuel economy. For the past year, Goodyear has been developing its self-inflating tire technology that's designed to keep tires inflated at the optimum pressure and the company is now set to debut the technology in Germany.

Goodyear's Air Maintenance Technology (AMT) system automatically keeps tires inflated to the optimum pressure without the need for any external pumps or electronics. Rather, all the system’s components are contained within the tire itself. The heart of the system is an internal regulator that detects when the air pressure drops below a pre-specified psi and then opens up to allow air from outside the tire into the pumping tube. Air is pushed through this tube to the inlet valve and ultimately into the tire cavity by the deformation of the tire as it rolls over the road.

Goodyear is initially aiming its AMT system at commercial vehicle fleet operators, citing 2008 figures from the American Trucking Association that more than half of all truck and trailer breakdowns for such operators involve a tire in some way, making tire-related costs the single largest maintenance item for fleet owners. The simple act of keeping tires properly inflated can cut costs by improving fuel economy and prolonging tread life.

Goodyear estimates that every 10 psi loss of tire inflation equates to a one percent loss in miles per gallon. Additionally, tires underinflated by 10 percent is estimated to decrease tread life by nine to 16 percent.

So, although Goodyear hasn’t announced pricing details of AMT tires, it will no doubt be claiming the potential savings for fleet operators over the life of the tire will more than offset the initial up front cost. 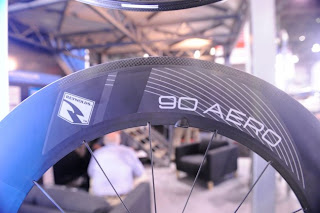 Reynolds just joined the wide wheel movement. While they had an exotic set with a very broad brake track called the RZR 92, their more common and (sort of) affordable race wheels (about $2,000 rather than $5,000) had narrow rim shapes. Lagging no longer, Reynolds has created a line of metal-spoked wheels built upon the RZR 92 rim shape called the Aero 58, Aero 72 and Aero 90.

Just about all the current aero wheel leaders have adopted rim shapes with a wide brake track and blunted spoke bed, but the composites company from Utah has a unique take on the “best” way to design a rim.

Like wheels from Zipp, Hed, Bontrager and others, the Reynolds Aero line has a wide brake track, but the spoke bed is very different. Zipp introduced the concept of using a blunted inner diameter for two reasons.

First, they say it minimizes steering input from crosswinds.

Second, the rim surface that acts as a trailing edge (last surface air passes over) on the front half of the rim becomes the leading edge on the rear half of the wheel, which happens when riding in wide yaw angles that strike the rider at an angle. Blunting this segment reduces the drag created by this previously neglected portion of the rim, says Zipp and others. Reynolds went the opposite route when designing the RZR and the new aero wheel line.

Instead using a blunted spoke bed, the aero wheels come to a sharp point. The wheel’s designer Paul Lew says, “You’re not going to see other wheels coming to a tapered face like this.” He’s right. Reynolds has gone against the current trend to create this very unique rim shape.

Lew agrees that the rear half of the Reynolds aero wheel isn’t shaped with an effective leading edge, and he says it doesn’t need to be. “Our testing showed we get 90% of aero advantage from the leading edge,” says the veteran engineer. Instead of designing the rim to perform under these conditions, Lew says the sharp spoke bed optimizes the rim’s aerodynamic performance as a leading edge. Like most wheel manufacturers, Reynolds has their own aero data showing their wheels to be faster than the competition. This test was paid for, conducted and published by Reynolds.

The second advantage to a blunted inner diameter claimed by many of Reynolds’ competitors—improved handling in cross winds—has been validated in many ride tests by manufacturers, athletes and media reviewers alike.

Lew says his antithetical design does the same thing only better. They both can’t be right.

More data displayed in the Reynolds booth showed their aero line (58, 72 and 90mm depths) creates less side force than other wheels. Side force is the force pressing against the rider and bike, but steering torque is more important to handling predictability and Reynolds did not have this data on display.

Reynolds’ bolt claims need to be verified by third parties, but they are one of few wheel makers with a truly unique rim shape without a peer or imitator in the market.