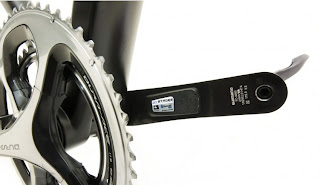 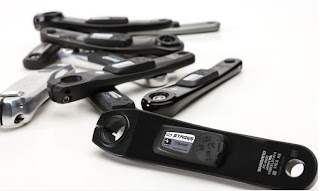 Cycling power meters generally need to be affixed to the crank with wire ties, magnets, brackets or double-sided tape. The StageONE from Stages Cycling is a power meter that comes pre-installed on the left crank arm component of a bike. It uses a strain gauge and an accelerometer to capture power output data, which is transmitted via ANT+ and Bluetooth to compatible cycle computers and smartphone apps. Most important of all, it's makers claim it's cheaper than existing cycling power meters on the market.

The StageONE is sold pre-attached to 14 different aluminum crank models from Cannondale, Shimano, and SRAM, so installation is accomplished by replacing the left crank arm on the bike. It uses ANT+ and Bluetooth Smart technologies to wirelessly transmit data to a head computer, such as a Garmin device, or a cycling app on an iPhone or Android smartphone, such as Strava or MapMyRide. The wireless connectivity also allows Stages Cycling to provide firmware updates for the unit while keeping it sealed to the elements.

The unit uses an accelerometer-based cadence measurement and, because it only measures the power of the left leg, the company doubles the result of the standard equation to give a measurement for the overall power output based on both legs. Stages Cycling says its own internal testing has "found this assumption to be fair, consistent, and work for 99 percent of riders out there."

For those concerned about weight, the StageONE adds 20 grams (0.7 oz) to the bike, which most gram crunchers will agree is nominal, considering the metric it provides. In the scheme of things, it’s roughly half the weight of an energy bar, which many cyclists tuck into the back pocket of a jersey before a ride.