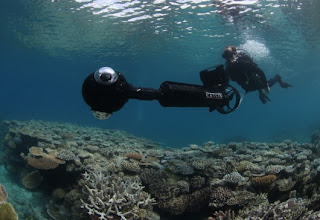 Since its creation, Google Maps has proven again and again how devoted it is to digitizing as much of the world's surface as possible. But while the company may have covered a huge chunk of the Earth from hiking trails to snow covered slopes, it has yet to tackle the 71 percent of the planet that is covered by oceans ... until now. Google recently unveiled some new underwater locations for Google Maps, where users can explore panoramic views of ocean life and coral reefs from around the world using Street View.

Google Maps visitors can now virtually "walk" along certain reefs through Street View using the same interface for city streets and neighborhoods above sea level. Users can move to different areas of the reef and pan around or zoom in on each one in 360 degrees to spot sea turtles, manta rays, living coral, and even some accompanying divers and snorkelers. The effect is like retracing a scuba dive that has been frozen in time.

To capture these stunning panoramic views, Google partnered with the Catlin Seaview Survey, a project devoted to documenting the ocean reefs using the latest technology. Armed with an SVII camera attached to an undersea vehicle, the team was able to record continuous 360-degree images while drifting through the water. The process results in 50,000 images per area, which link together to form a full panoramic view that can be explored in Google Maps. The SVII is also the world's first underwater, tablet-operated camera, which allows the scientists gathering the images to access various data they've already collected while in the middle of a dive.

The crew visited six different reefs: two in Australia (Heron Island and Lady Elliot Island), two in Hawaii (Molokini Crater and Hanauma Bay), and two in the Philippines (the Apo Islands and Wilson Island). Researchers plan to revisit the same locations as well as others to not only record the state of the reefs for future generations, but also to see how the reefs are responding to changes in the environment over time (sadly, some areas of the reefs are already showing signs of damage).

By the end of December the expedition plans to survey 20 different areas of the Great Barrier Reef before moving on to other locations in Hawaii, the Philippines, and Bermuda. Future expeditions will also employ diving robots and special instruments for deep reef surveys, which could lead to the discovery of new species.

Google Maps' new ocean sections are definitely worth a look if you want to get an up-close view of some of the most gorgeous reefs in the world without the need for training or the risk of getting the bends. Google Maps currently has all the locations available for access on the Street View section of its website.

Check out the video below to see how Google and the Catlin Seaview Survey captured their amazing panoramic shots of the ocean depths.