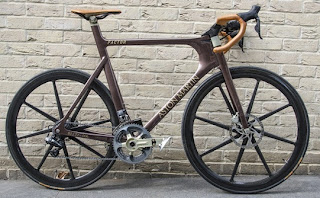 The Aston Martin One-77 Cycle is the world's most technologically advanced road bicycle. Designed, engineered and built in Britain, the One-77 Cycle features technology and innovations derived from racing car technology, together with the highest levels of fabrication and craftsmanship.

A fully integrated synthesis of cutting edge forms and space age materials, the bicycle has been developed alongside parts for F1™, Le Mans, MOTO GP and some of the world's fastest road cars. From the outset, the One-77 Cycle was conceived as a training aid for the serious athlete, with a fully integrated, multi-channel ergonometric data recording system that provides a rich, in-depth record of athletic performance.

There are two facts you must know about the Aston Martin One-77 bike. Fact One: you can get it valet parked at the Dorchester. Fact Two: it costs £25,000, equivalent to three - THREE - VW Ups.

Thankfully, I don't have to experience Fact Two first hand - it's merry trivia imparted by Factor Bikes (the blokes that make it for Aston) project manager, Simon Roberts. But more on that later.

First, the fun fact. It is entirely possible to have a pushbike parked by one of those chaps with the hats outside the Dorchester - hotel of choice for tittering poshos and those miniscule handbag dogs that look like they've been peeled. All it requires is riding to the entrance (we had our jeans rolled up on the chainring side. Not sure if that matters) and pointing to the massive great big Aston Martin logo. Then a man in velvet whisks it off and, in our case, slips it between a Lamborghini Aventador and KTM X-Bow.

But that's not all. Children stare at it through their cameraphones. People want to have their picture taken next to it. Cabbies ask how much it costs then tut and shake their heads. If you're interest in fast cars lie solely in attracting attention, you should buy one of these instead. It is, apart from the pricetag and lack of engine and number of wheels and having an inside, a supercar.

But £25,000 is still a colossal, unimaginable amount of money to spend on a bicycle. It's ten grand more than the bike Chris Hoy just won an Olympic gold medal on. It's three brand new cars. It's dangerously close to the average Briton's annual salary. So how the hell is it justified?

This is what the manufacturers claim is the most advanced bike... in the world. The frame, forks, wheels (wrapped in bonded, tubeless tyres) and handlebars are handbuilt from carbon fibre. It's got hydraulic disc brakes (with the hoses hidden in the frame), an electric gear mechanism, in-built LED lights, the leather's genuine Aston Martin (and trimmed in the same workshop as the One-77) and it's got the same sensors you'd find on an F1 car.

Why do you need sensors? To fund the computer with information, of course. The motorsport-derived data logging system provides more than 100 channels of performance feedback including speed (we managed 33mph), rate of climb and power (on London's Mall, TG.com produced 147lb ft per leg - 29lb ft more than a standard Mini Cooper - and managed a maximum instantaneous horsepower output of 0.88, which is slightly less than, erm, a horse). It also tells you biometric stuff like measurements for ECG, respiration rate and core body temperature. The whole lot's powered by a little battery - in a carbon fibre housing, as you'd imagine - and has a charge life of 12-14 hours. Incidentally, it has enough juice tucked inside to start a car.

So, what's it like to ride? Bikey. And terrifying. Especially if you're doing so in London, the insurance you arranged has a £5000 excess and huge red cars keep trying to kill you. Acceleration and top speed are directly proportionate to what and how much you've had for lunch. Same with emissions. Our whistle-stop tour of Britain's capital also revealed that you can drive it in bicycle lanes and right through Hyde Park with complete impunity.

Even more useable than a supercar, then. And an absolute attention magnet that men in big hats park for you. Providing you overlook the fact that this isn't actually a supercar, this is the cheapest supercar in the world. 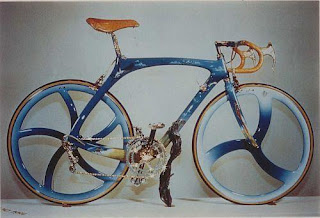