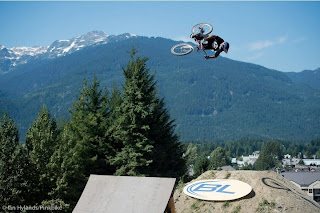 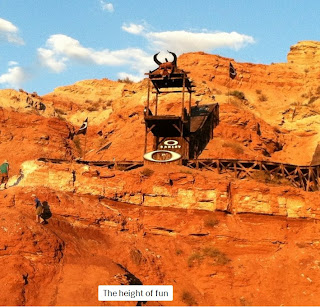 The Evolution of Red Bull Rampage 2012

It's the last stop on the FMB World Tour next weekend – and what a finale it promises to be Nerve-racking drops, crazy man-made obstacles, knife-edge trails along cliffs, and the most fearless MTB riders on the planet: Red Bull Rampage isn’t for the faint-hearted.

Since it debuted in 2001, Rampage has become one of the most hotly anticipated events on the FMB World Tour, thanks in large part to the crew of builders and pro riders who put together this MTB paradise. Randy Spangler and Josh Bender are understandably “stoked” with their creation for 2012, The Evolution.

Features range from wooden ramps to transfer gaps, hips, and gnarly lines down ridges with multiple drops. Riders will also be looking for their own unmarked routes down to notch the quickest time.

New-and-improved trails at the top are knee-tremblingly high. This year, riders will begin their descent from the highest point with two routes to choose from. Head right, and there’s the Scissor Drop before the trail hugs cliff face. Go left, and it’s down Shocker Ridge – a gap jump onto a narrow landing – and more steep drops.

As well as the Stonehenge step-up, the Hip of Love and an upgraded Coffin Gap, there’s a new wooden feature: a 150ft ladder bridge to quarter pipe near the bottom… just for maximum drama at the finish line. Russell Shumaker, a former professional ATV racer, was drafted in to test the landing and he tells us to expect some mind-blowing flips and whips.

Lest we forget, there's also the Oakley Icon Sender. Two years ago, Cameron Zink performed a 360 off the 40ft-high wooden structure on his way to victory and it's likely to be the scene of more high-octane drama this year. There are now three sender options – an upper and lower deck as well as a side sender. Just for added confusion.

And last, but not least, the Canyon Gap has also been upgraded, with the landing increased in height by a frightening 6ft.

Oh, and one more thing before we go. These elite riders probably won’t want to grab hold of any hollows or holes for balance. As one of the digging crew discovered in the building process, that’s where venomous snakes and scorpions live.

Red Bull Rampage takes place from October 5-7 and redbull.com/bike will be showing it live from 8pm CEST on October 7.

By Rajiv Desai on 6 October 2012 in Mountain Bike Freeride

Qualifying for the Red Bull Rampage is over. Check out the 12 riders who advance to Sunday's final

The line-up for Sunday’s final of Red Bull Rampage 2012 is now complete following the end of the qualifying in Virgin, Utah, yesterday.

Twenty-four riders took to the course to battle it out for the 12 spots on offer for the final.

The 12 riders who got through in qualification join 12 pre-qualified riders in the line-up for the final of Red Bull Rampage 2012.

Cameron McCaul, James Doerfling and Kyle Norbraten were the three top qualifiers in the qualification round yesterday.

Watch the clip in the video player above to see action from their runs in qualifying yesterday.

Martin Söderström, who is challenging for the overall FMB World Tour crown, also made it through but there was disappointment for fellow title challenger Thomas Genon who missed out on a final spot by finishing in 17th place in qualifying.

Four riders failed to finish the course with one non-starter on the day.

Red Bull Rampage finals takes place on October 7. You can watch it here live from 9pm CET this Sunday.