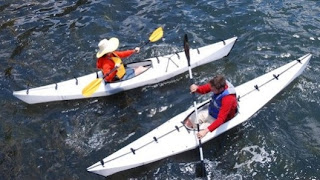 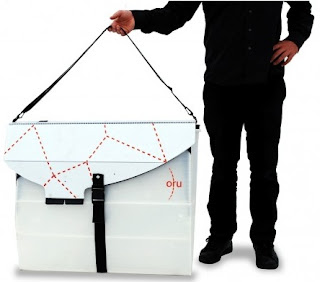 ON THE WATER.Oru kayak folds up like origami By Ben Coxworth.September 20, 2012

The Oru folding kayak We’ve already featured a folding rowboat and a folding canoe, so why not a folding kayak? Well, that’s what the Oru is ... and unlike existing folding kayaks that incorporate frames and skins that have to be assembled, it consists almost entirely of one piece of folded corrugated plastic.

The Oru is the creation of San Francisco designer Anton Willis.

Described as “the world's first origami kayak,” it can be folded down into the form of a suitcase-sized box. That, needless to say, would make it much easier than a regular kayak to store in an apartment, stick in a car, check at an airport, or carry through the wilderness. When it’s time to hit the water, it can reportedly be unfolded, joined together and ready to go within five minutes – see the video at the bottom of the page.

The Oru website states that the boat’s commercial launch will be happening “soon.” According to an article on the Make blog, it should be priced at approximately US$500.