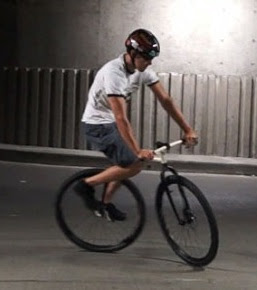 Bicymple looks set to hit the road via crowdfunding route


The bicymple looks to redesign the modern bicycle

Back in October, we first got a glimpse of a minimalist bicycle called the bicymple that looked to simplify the design of a product that was first brought to market in the late 1800's. To get his creation on the road, Josh Bechtel, has gone the crowdfunding route, and the project is already well on the way to meeting its funding goal after just a few days.

In case you missed the initial reveal of the bicymple, it is, as the name implies, the traditional bicycle, simplified. Gone are the chains and gears of modern bicycles. Instead, the pedals are mounted to the back wheel, which changes some of the core functionality of the bicycle. Bechtel is quick to admit that "if you can only own one bike and it has to be fast, then the bicymple isn't for you."

The initial reveal of the bicymple was met with its share of criticism. Commenters were quick to point out that it seemed like it would feel like riding a unicycle with a front wheel attached. Josh Bechtel defends that his product feels more akin to a bicycle than a unicycle, but it certainly does not have a problem with popping the occasional wheelie for good measure.


The lack of a chain also allows gives the bicymple "crab-riding" capabilities. With the pull of a lever, the rear wheel can turn in addition to the front. Is this the most practical way to ride a bike? Not even close; but it sure does look like a lot of fun as can be seen in the video below.

The creators have also revealed something new with the Kickstarter campaign; the bike will have an optional model that actually has multiple gears. This model comes equipped with two internally geared speeds, and lacks the freewheeling option of the traditional model. If you are looking to use this product as a more practical means of transportation, this model might be better for you, but it still does not offer the same level of practicality as a traditional bike.

The bicymple is currently seeking funding on Kickstarter. The goal is surprisingly low at only US$20,000 and is already approaching 75 percent of its funding goal after only a few days. If you want to actually snag yourself one of these interesting bikes, you will need to pay a minimum of $800 for the base model. From there, the price goes up to $1,100 for the freewheel model and then jumps to $2,700 for the model that actually features two speeds. The estimated delivery date on the Kickstarter page is December 2013, but the creators estimate that the bikes will be shipped well before that.