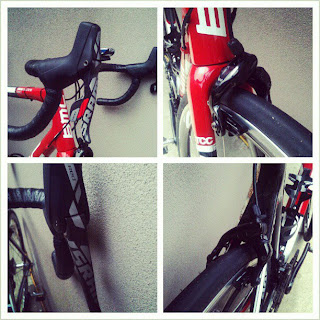 posted by Tyler (Editor) - December 16, 2012 - 8pm EST So far, we’ve seen plenty of SRAM’s Red hydraulic disc brakes in the wild, but almost forgot that a rim brake version was in the works, too.

This pic comes from CyclingTip’s Instagram stream, with a hat tip to Simon for the heads up. No details, just this collage, but if you recall from their original quasi-announcement and subsequent leak, the calipers should be good for the wider Zipp Firecrest rims (24.62mm at the brake track for the new 202) and 28C tires. Of course, the “summer 2012″ availability has blown past, so we’re guessing late spring or early summer 2013.

Looks wise, it seems like a pretty straightforward design. The hoods and levers look the same as those we’ve seen on the disc brake equipped bikes, with the fluid pushing a small piston to close the calipers. It’s a far more traditional design than Magura’s RT6TT brakes, with nice rounded sections and a fairly narrow profile compared to the lever arms and cable clamps required for mechanical brakes. They’re a little dark, but appear to be a single pivot design with an adjuster barrel with inline quick release lever that looks very similar to the current mechanical Red brakes. If our assumption is correct, we’re thinking the additional power of a hydraulic system negates the need for a dual pivot caliper, which could save some weight. 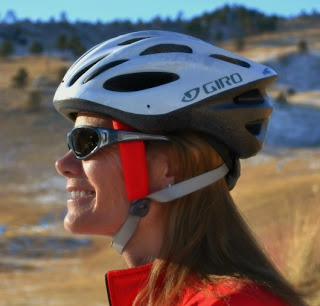 Sometimes when you’re cycling, especially if you’re out on the open road, the constant wind noise in your ears can get rather annoying. It can also be potentially dangerous, as it may mask traffic noises. Well, if you’re OK with sporting what at first glance looks like a pair of dark sideburns, Cat-Ears might be the answer.

Wind noise is ordinarily created when air flows over and around the ear, creating audible turbulence as it does so. Modeled after the tufts of fur at the front of a cat’s ear canal, the faux fur Cat-Ears attach with Velcro to the helmet straps in front of the rider’s ears, dampening and deflecting that air flow.

They reportedly reduce wind noise by 40 to 60 percent, but because they don’t actually cover the ears (which a headband would), they don’t compromise the wearer’s hearing. Also, if you’re not one for the sideburns look, the company does also offer models made from less funny-looking fleece.

This actually isn’t the first product of its kind. Slipstreamz is one of the companies that currently offers something sort of similar, although it isn't made from sound-deadening fur or fleece, and requires the helmet strap to be twisted. 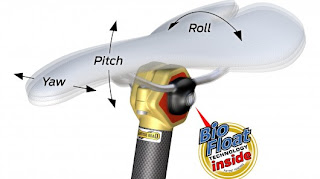 BioFloat bicycle seatpost lets the seat move with the rider

For a great many people, one of the most unpleasant aspects of cycling is feeling every little bump in the road, transmitted through the seat and into their butt. Various companies have responded by offering suspension seatposts, such as the BodyFloat and the CF3 Pro Carbon. While those and others soak up some vibrations by flexing up and down, the prototype BioFloat seatpost takes things further – it functions as a shock absorber, but it also allows the seat to move around sort of like the head on a bobblehead doll, moving with the rider’s pelvis instead of pressing into it.

The BioFloat consists of a carbon fiber tube (the post), topped with a head that clamps onto the seat’s mounting rails – so far, just like a regular seatpost. The seat clamp, however, is cradled within a pair of flexible clamshell-style elastomer inserts, isolating it from the rest of the head. In this way, the seat sort of “floats” at the top of the seatpost. While sufficiently stiff to hold things in place, the elastomers are still flexible enough to eliminate some of the road vibrations, while also letting the seat tilt fore, aft, left and right. This allows it to move in response from pressure applied by the rider’s butt, minimizing pressure points and friction.

BioFloat co-inventor Tom Petrie likens it to the float feature that has become standard with clipless pedals, in which the rider’s clipped-in foot still has some room to move around on the pedal, allowing for greater comfort and less chance of injury. In keeping with that analogy, in the same way that riders can adjust the amount of float in their pedals, BioFloat users could also adjust the amount of float in their seatpost by choosing between three included sets of elastomers of varying softness.

Test riders have apparently liked using the 245-gram BioFloat prototype – once they got used to it. Petrie told us, “It’s pretty universally ‘I noticed it a lot when I first started riding it. It was weird, but I ended up liking it. I definitely noticed that it smoothed out the ride. When is it available?’.”

That’s a good question, actually. Petrie, who also runs Colorado-based bike parts company Cantitoe Road, hopes to have it on the market soon after he finds a business partner to help finance commercial production. He’s aiming for a retail price of about US$200.