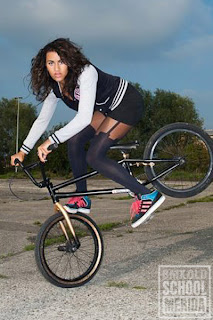 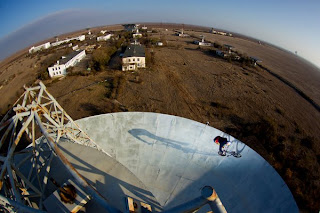 Vasya Lukyanenko is not one to do anything by halves. Aiming to top his spectacular ride along a wave shaped roof of a skyscraper in Kiev in 2010, Vasya was looking for a new project that would be better than even that and take his riding to the next level.

An opportunity to ride at the Ukrainian National Space Centre came up and Vasya gladly accepted the chance to jam at the iconic National Spacecraft Control and Testing complex outside the city of Yevpatoria on the Ukraine’s eastern coast.

Built just a few months prior to Yuri Gagarin’s historic fight into space in 1961, the complex has over the years tracked numerous Soviet Union space programmes and more recently international space exploration.

The complex also has huge 16-metre radar dishes which dominate the landscape of the surrounding area. As soon as he saw the radar dishes, Vasya knew he had to ride on them.

Once he clambered onto one of the dishes, Vasya was in his element, pulling off a series of out-of-the-world BMX tricks on the fully rotating platforms as our clip above shows.

“I’m always looking for new spots for extreme BMX, but this one can’t be compared to anything,” Vasya explained.

“These dishes are just perfect for quality tricks, but you have to be really careful of the strong overhead wind. You can definitely feel that you are high up in the air while you are riding – after all, it’s about a 40-metre drop to the ground from here.”