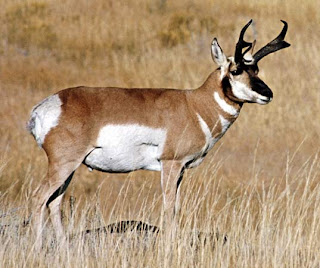 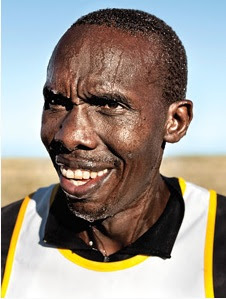 Andrew Musuva ,the only runner with experience to coldcock a kudu

TUESDAY, APRIL 19, 2011 FAIR CHASE On the plains of New Mexico, a band of elite marathoners tests a controversial theory of evolution: that humans can outrun the fastest animals on earth.

THROUGH THE BINOCULARS I see them: nine tiny men in bright jerseys running in formation across the vast short-grass prairie of eastern New Mexico. They're chasing a tawny pronghorn antelope through the crackling stalks of late summer's fading wild sunflowers. The buck weighs about 130 pounds, like the men racing after it, but that's about the only thing they have in common.

pronghorn It can run exceptionally fast, being built for maximum predator evasion through running, and is generally accepted to be the fastest land mammal in the Western Hemisphere. The top speed is very hard to measure accurately and varies between individuals; it is variously cited as up to 112 km/h (70 mph). It is often cited as the second-fastest land animal, second only to the cheetah. It can, however, sustain high speeds longer than cheetahs. http://en.wikipedia.org/wiki/Pronghorn