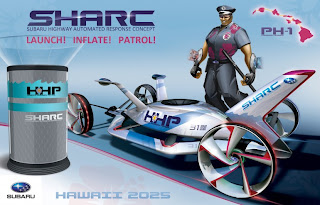 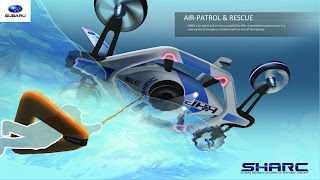 Subaru’s SHARC (Subaru Highway Automated Response Concept) has been named the winner of the 2012 LA Design Challenge. The futuristic concept car was chosen by the judges as the best embodiment of the “Highway Patrol Vehicle 2025."

Subaru’s SHARC beat six other automotive design studios, each of which presented its own concept of "the ultimate 2025 law enforcement patrol vehicle that supports the needs of dynamic urban environments."

Subaru’s design for an unmanned 24-hour highway monitoring vehicle is intended for use by Hawaii’s highway patrol to police the state’s hypothetical “Paradise Highway” spanning the waters between the islands in 2025. The design is meant to be not only cutting edge, but also to conform to Hawaii’s UltraGreen carbon-neutral environmental regulations and eliminate the need for a large patrol staff in a time of shrinking budgets.

The SHARC is basically a big kevlar balloon with a framework made out of memory material that changes when you run a charge through it. Launched out of a tube, it expands to full size revealing wheels that are shockingly multipurpose. Each one has a 96 bhp electric wheel hub motor and the band-like tires have two tread surfaces set at an angle so the SHARC can make high-speed runs or navigate rough terrain. In between the treads is a slot for the headlamps and tail lights to shine through and the blade-like wheel spokes are actually propellers for when the SHARC takes to the air.

At the end of the day, SHARC deflates itself, rolls itself up again and goes back in its tube. 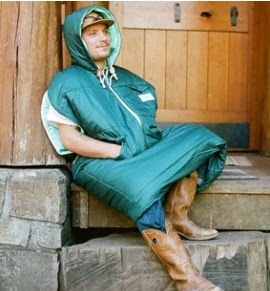 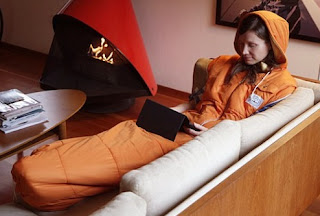 The Napsack sleeping bag looks like a giant hoodie

The Napsack looks like a giant hoodie, but is also a sleeping bag

The Napsack is a new product from Poler that is part sleeping bag, part hoodie. In a similar vein to the Selk'Bag, it has the warmth and cushioning of a run-of-the-mill sleeping bag, but it is completely wearable like a hooded sweatshirt.

The Napsack has a zipper at the bottom that allows you to open it up and pull it over your legs. It also cinches at the bottom, so you can wrap it above your knees and walk around comfortably while wearing it. The idea is that you can wear it while sitting around the campfire and walk right into the tent, zip up the bottom and go to sleep as you would with any other sleeping bag.

It also comes with zippers near the shoulders so you can pull your arms out. It would be pretty hard to actually make s'mores at the campfire if your arms were locked inside of the sleeping bag.

The Napsack additionally features pockets, so you can carry around your phone or other personal articles while you are wearing it as a hoodie. The chest pocket has a pass-through, so you can run headphones inside and listen to music.

This is not the warmest of sleeping bags, so it can also be used around the house. This means that it isn't meant for being used if you are camping in the dead of winter, but is instead intended more for use in moderate weather.

The Napsack is available now for US$130. It comes in two sizes and is available in black, blue, green, and orange.